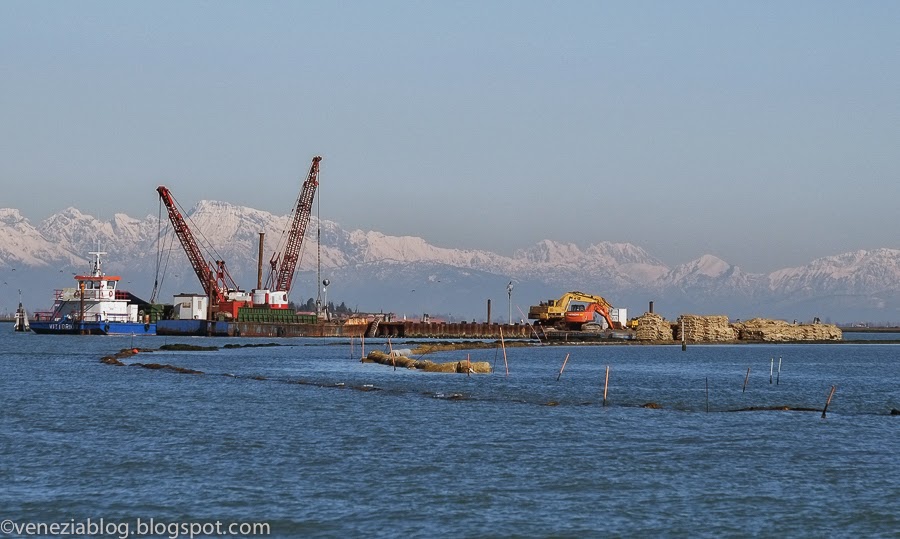 One of the defining features and great virtues of Gothic architecture, according to John Ruskin, that champion of Venetian Gothic, was its irregularity. I find myself thinking of this when I see the work being done in the lagoon to the west and a bit north of Venice, pictured above. They are creating a vast new barena, one of those islands submerged during the highest tides, exposed during low ones, that were once a common feature throughout the lagoon.

In their succinct and immensely informative book The Science of Saving Venice, Caroline Fletcher and Jane Da Mosto talk more precisely about mud flats and salt marshes (rather than my more general term barena) and note that they "are down to a third of their extent since the end of the 19th century," while approximately "20 percent of the lagoon's plant and 50 percent of its bird species have disappeared since 1930."

"So what?" I can imagine some people responding, "we've lost a few plants and birds...."

But more than being just a vital part of the lagoon ecosystem, the "irregular forms" of mudflats and saltmarshes--with their shallow textured depths, their underwater grasses, their "intricate sub-structure of winding creeks and meandering canals"--served to "moderate wave energy" coming in from the Adriatic Sea, according to Fletcher and Da Mosto, and "used to help to dampen the intensity of acqua alta."

Man-made changes in the 20th century to the dimensions of the lagoon (land reclamation projects for the airport, for example), to the shape of the lagoon's inlets from the Adriatic, and to the number and (much greater) depth of canals, have transformed this once shallow marshy mucky mixed ecosystem of salt and fresh water into an ever deeper and ever-more-scoured salt water bay. The lagoon now holds twice the volume of water it once contained within its formerly larger dimensions and salt marshes and mud flats have disappeared from the central lagoon around the city, leaving the tide and wind-pushed waves to enter the city with unprecedented force.

And so the barges and heavy machinery and laborers head out with their gabions (wire cages containing rock or other material), sacks of organic matter and other supplies to try to reintroduce into the Venetian lagoon the "Savageness" the "Changefulness", the "Naturalism," and the "Redundance" that Ruskin celebrated as the essential qualities of the Gothic, and by which he meant variety, spontaneity, roughness of surface, imperfection, accumulation of diverse forms--as opposed to the smooth scrubbed abstracted symmetry and simplicity and uniformity for which he condemned Classicism and the Renaissance, and which now might be used to describe the state of the lagoon bed.

Indeed, Ruskin argued that the moral health of the Venetian Republic was directly embodied in the noble vivacious irregularity and spontaneity of its Gothic constructions; in their rough imperfect surfaces bearing the imprint of un-oppressed laborers, of their detailed abundance of leaves and vines and natural forms untamed by tyrannical ideals of form. It's actually quite a dubious reading of Venetian history: part myth-making, part fond fantasy, and largely (like much of history) having more to do with the challenges and context of his own time, and his didactic response to them, than with any doge or council or citizenry of Venice.

Yet if his principles of gothic had little to do with the actual moral state of the lagoon society in which they were employed, they seem now, over 150 years from when he first put them forth, to have a good deal to do with present attempts to try to restore the ecological health of the lagoon. And so you (or at least I) can still find Ruskin all around Venice, even in the lagoon itself amid heavy machinery, even when you (or I) aren't looking for him.

Posted by Steven Varni, aka Sig. Nonloso at 9:21 AM