A Visit to Ca' Barbaro

This past weekend Fondo Ambiente Italiano sponsored a nation-wide series of open houses to call attention to the work they do preserving the cultural and natural heritage of Italy. In every region, from top to toe, and in Sicily and Sardegna, too, you could visit palazzi, churches, parks, that are typically not open to the public. Among the places opened up in Venice was Ca' Barbaro on the Grand Canal: once the home (or one of them) of the illustrious Barbaro family; then, from 1885 until the recent past, the abode of the American Curtis family, whose illustrious guests included Monet, Whistler, Sargent, Browning, and Henry James.

FAI was offering guided tours to Ca' Barbaro (in Italian), but in order to enter one had to sign up for a year's membership in the organization (39 euro for one person). I didn't think twice about doing it: it was a good cause and, after all, we are talking about Henry James here and the palazzo in which he finished writing The Aspern Papers, and which he used as the central setting in The Wings of the Dove.

No photography was allowed inside of the house, but I did happen upon three excellent photos of the interior on the following website, which I'd highly recommend taking a look at: 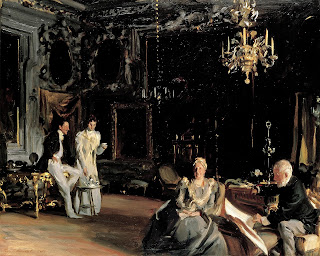 The top photo on the above page of the Slow Tours of Venice blog shows what was, first, the Barbaro ballroom, then, the famous salone of the Curtis family, depicted by John Singer Sargent in oil (at right) and by James in words.

The third photo from the top of the Slow Tours page is of the entrance hall of Ca' Barbaro. The entrance hall you enter after reaching the top of the external staircase in my photo above.
The bottom photo of the Slow Tours of Venice blog page is of the red room in which Browning read from his last collection of poems shortly before his death just down the canal in Ca' Rezzonico.

The tour guide provided by FAI was excellent and enthusiastic about her subject (though she perpetuated the myth that James actually wrote The Wings of the Dove in Ca' Barbaro, which sounds good but isn't actually true), and the house was wonderful to see. My only disappointment was that the tour did not include the little library in which James once slept, and which he celebrated in one of the many letters he wrote from the palazzo (collected in a nice little volume, Letters from the Palazzo Barbaro, by Pushkin Press in 1998). This room is located directly above the salone, but was not included in the tour because it belongs to a separate apartment (and separate owner) from the piano nobile.

That owner, Patricia Curtis, is the great-granddaughter of the original American owners of the palazzo. John Berendt's book, The City of Falling Angels, devotes a chapter to her painful decision to sell the piano nobile of the palazzo. It also describes the library in which James slept, and concludes with a scene in which Ms Curtis's half-Venetian son, Daniel Pelligrini Curtis, speaks of his desire to reacquire the entire palazzo at some point in the future.

Sadly, Mr Curtis did not have the chance to do so. He died suddenly, in his 40s, of an aneurysm just a year after Berendt's book was published.

Which is perhaps why, while looking for images of Ca' Barbaro on the web, I found one of that library directly above the salone. It was, as you can see for yourself by clicking on the following link, on a real estate website:

There's a full gallery of images of the top-floor apartment of Ca' Barbaro, but just one of the library. And the real estate site makes no mention that Henry James slept there or sang its praises, or that it once--before the Barbaro line died out in the 1850s and the cultural treasures of the palazzo (including various Tiepolo paintings) were sold off by speculators--housed one of the great private libraries of the city.

It does, however, speak of its "enviable" location and the nearby "galleries and antique shops" in this "very select part of the city." Perhaps these are the only kinds of facts that will matter to its new buyers. But I hope not.

Posted by Steven Varni, aka Sig. Nonloso at 5:59 AM

Email ThisBlogThis!Share to TwitterShare to FacebookShare to Pinterest
Labels: Palazzi of Venice