Art and Truth on Canale Scomenzera 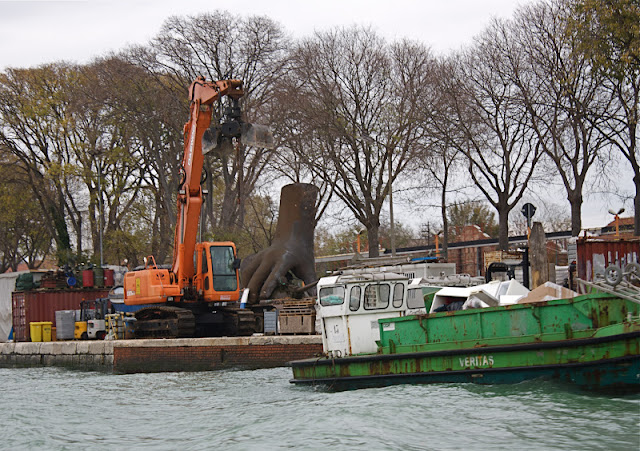 The first time I noticed the life-size tank and giant pair of hands on the side of Canale Scomenzera, on the busy fondamenta at the western end of the Santa Marta section of Venice, I was disappointed not to have a camera with me and was sure it would be loaded onto a barge and hauled off any day. From what I could see it didn't appear to be an especially interesting piece of art, really, but the novelty of seeing it in the middle of a dock usually given over to construction materials and gravel and garbage barges endowed it with a certain interest.

That was over a year ago.

Soon after I first saw it, I'd periodically think that I really should make a point of going to take a photo of it before it disappeared--but I never did. And when I happened past it on a vaporetto, on the way to Piazzale Roma, say, I either never had a camera with me or, if I did, the tank and giant hands were entirely hidden by a load of grocery crates or something.

And the longer it remained in the same place, amid all the practical or industrial and non-aesthetic stuff of the fondamenta, the more my interest in it faded.

Only last week, as we returned home on a vaporetto from a trip to the Dolomites, did I finally happen to get a photo. And only today did I finally find out what the work is--or was.

It's by the artist Lorenzo Quinn (son of the actor Anthony), and was featured in the 2011 Biennale in two places: first, floating upon a raft moored off the island of San Servolo and, then, on the dry land within the Italian Pavillion.

There were originally five life-sized toy army figurines that went with it, but they appear to be MIA from the work's present site on the fondamenta of Canale Scomenzera. You can read all about the work, and see it in its original and complete form, here:

The illustration of the article above shows that the giant hands used to have the coloring of caucasian skin, but that pigmentation seems to have been washed away over the course of the work's extended exposure to the elements.

I wonder what the story is behind the work's apparent abandonment on the docks of Santa Marta. It couldn't have been cheap to fabricate it, and contemporary art of that size generally has a pretty hefty price tag.

And what about that green garbage barge with the provocative name of Veritas (in the photo at top) that happened to be moored near the work on the day I took the photo?

What kind of irreverent philosopher, or iconoclast, or perhaps even misanthrope, gives the name of Truth to the waste management department for the Veneto?

If one of the defining aims of much contemporary art after Marcel Duchamp was to show that in the context of a gallery or museum even the most ordinary objects can become aesthetic objects of contemplation or "art", perhaps the inverse is also obviously true.

That outside of the curated venues of the Biennale, abandoned to the elements of the workaday world, the Truth is that even the most technologically-advanced of fabricated aesthetic objects becomes merely--well, becomes merely garbage. Just another thing taking up space on a dock with too little of it anyway. Of interest, finally, only in its minimal usefulness as a surface to lean the broken rudder of a boat against. 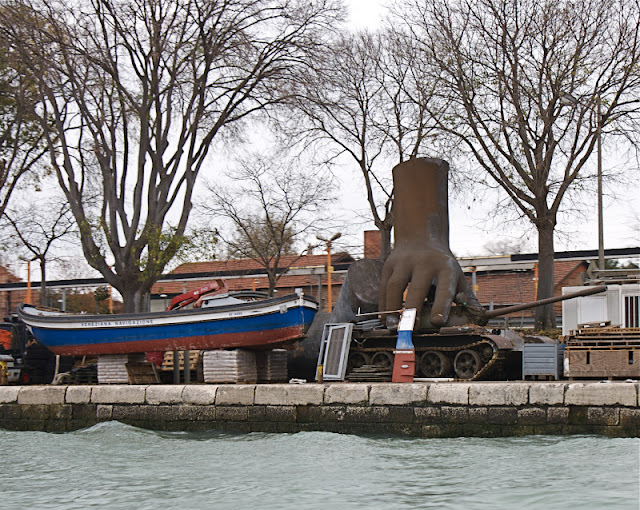 Email ThisBlogThis!Share to TwitterShare to FacebookShare to Pinterest
Labels: 54th Venice Biennale, Lorenzo Quinn, This Is Not a Game

In a Fog, Last Night 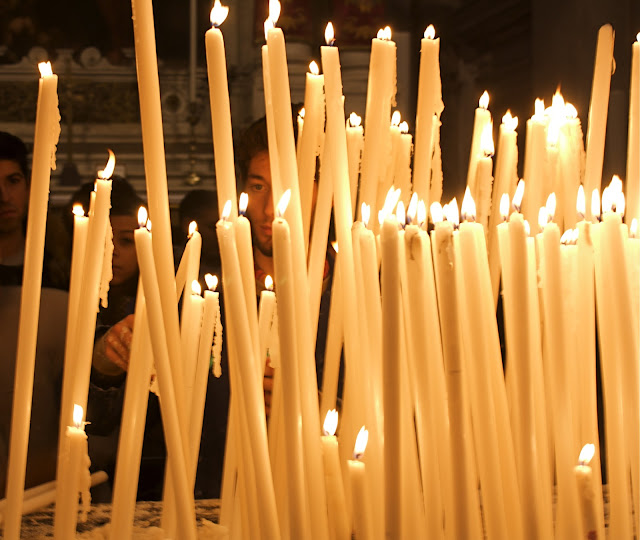 The thing about the Festa della Santa Maria della Salute is that no matter how tall the candle you buy it's unlikely to have a chance to burn for more than half an hour.

The size of the crowds simply make a longer life and what might be called a natural demise (or self-extinguishing) impossible.

For a great crush of people presses into the church at the peak periods of the festa, each clutching at least one candle, and there are only so many candle holders available. Basic math dictates the turnover will be great.

And this is where the youths depicted in the photos of this post come in. With infinite patience, in the narrow space between the agitation of the suppliants and the heat of the flames, they take and light each proffered candle. And when every holder is filled, they snuff them just as deftly, remove them, scrape the accumulated wax off the surface of the large table beneath the holders, and start the process all over again.

I found myself watching them for a long time, fascinated by both the intensity of the candle light and of their focus; marveling at these servants within the sanctuary, reminiscent partly of fast-food employees, partly of saints. 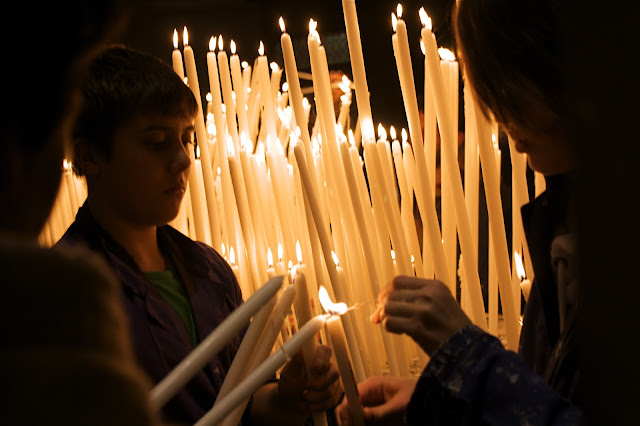 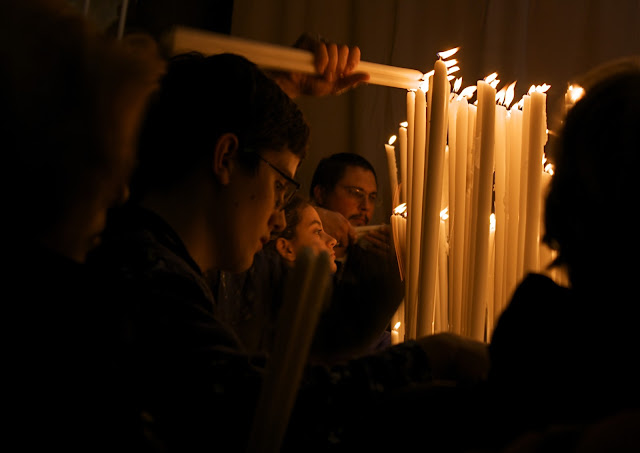 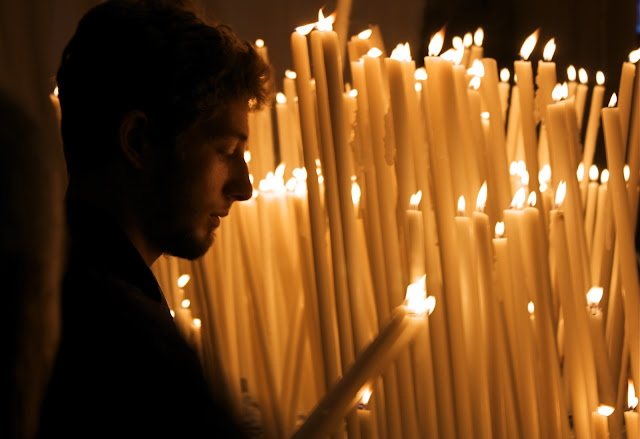 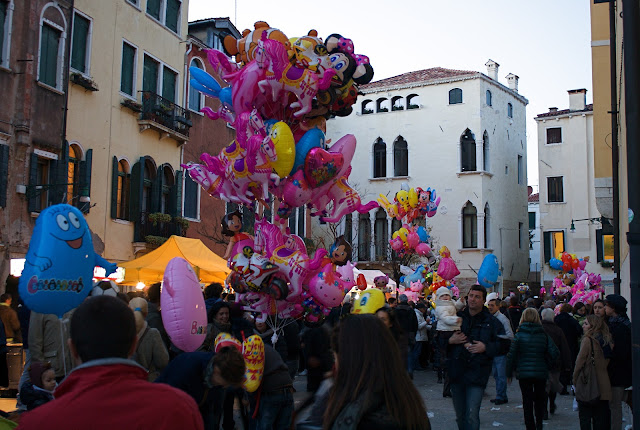 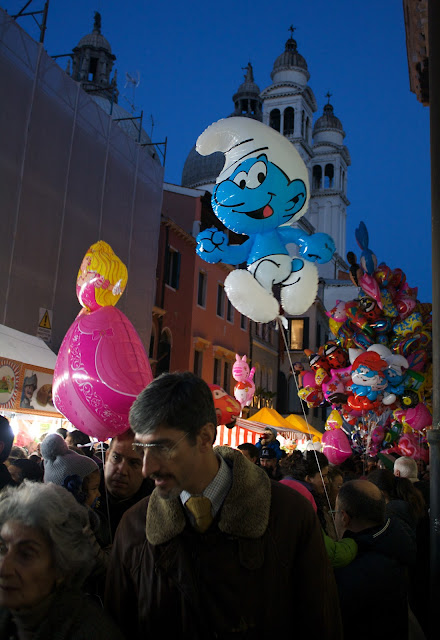 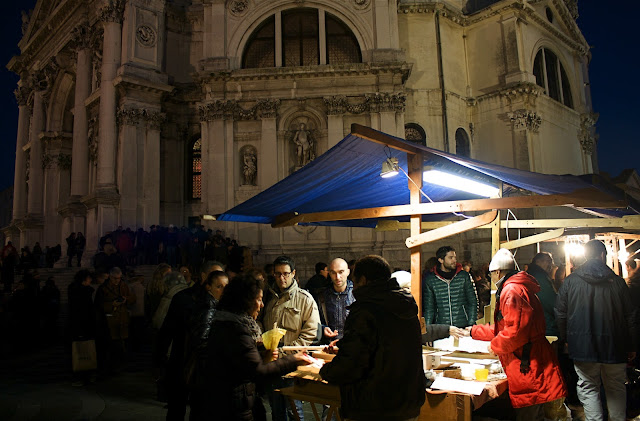 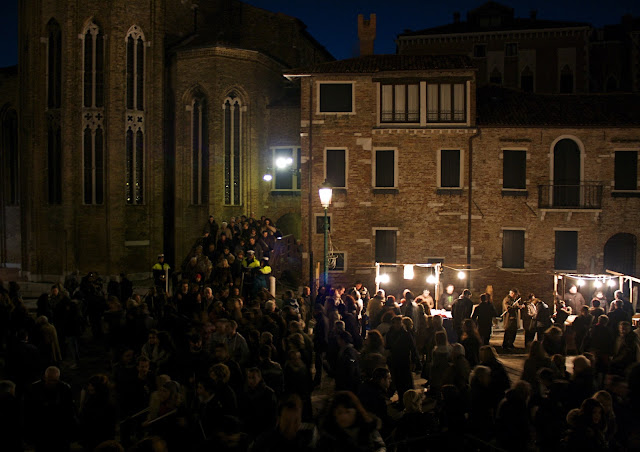 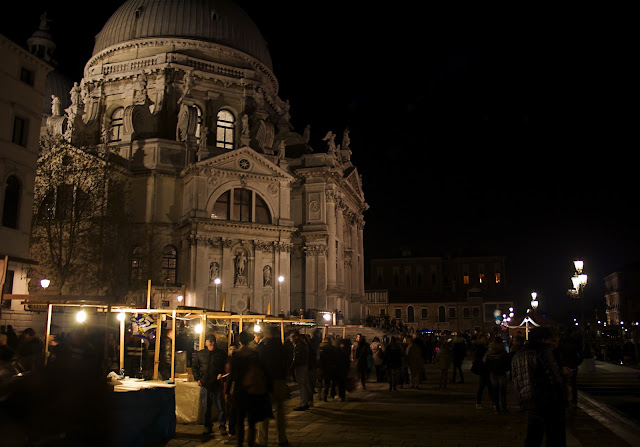 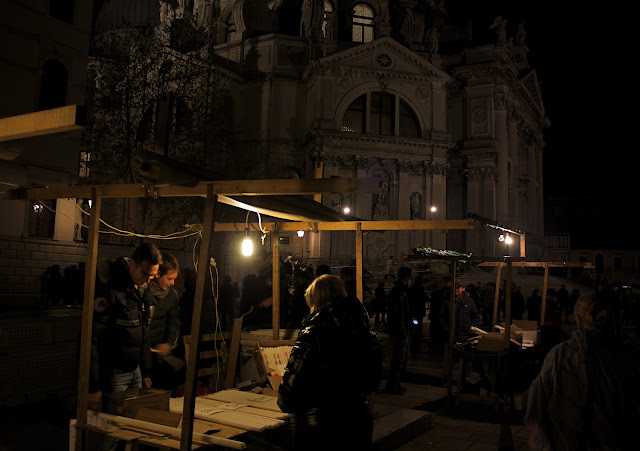 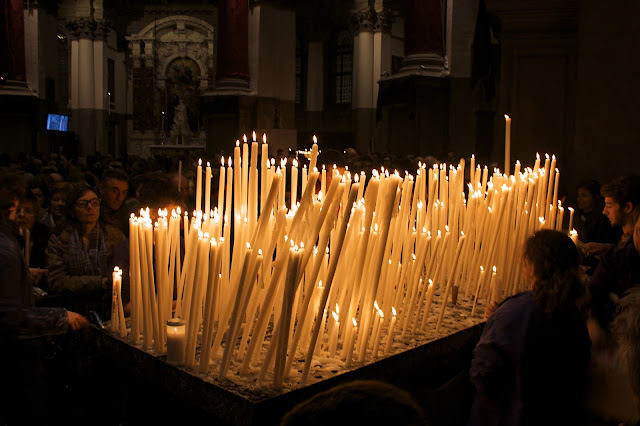 The day after tomorrow (Friday) I'll post more photos of the all-important candles inside the church--and those seemingly indefatigable youths who tend to them. 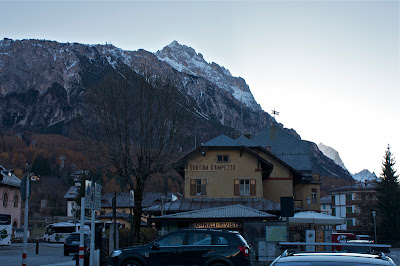 We've been here in Cortina D'Ampezzo since Thursday with almost no internet connection--which is rather nice--so please excuse the absence of posts. We return to Venice tomorrow or Monday. But lest anyone think I've abandoned the theme of this blog check out the picture below. It's not your typical depiction of the lion of San Marco: in fact, I've never seen the beast bear such a striking resemblance to William Shakespeare. But it is another reminder of how very diverse were the holdings of the old Republic. 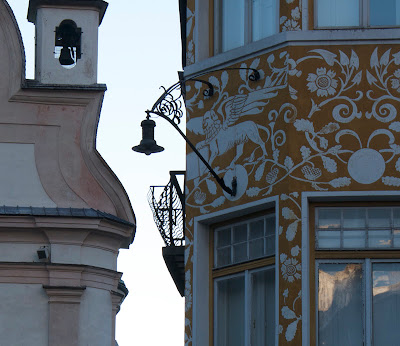 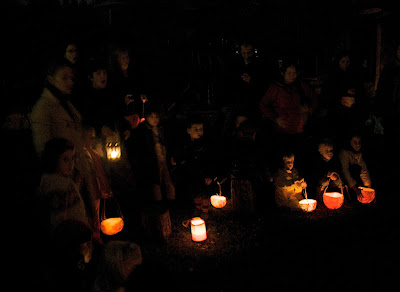 At my son's small Waldorf pre-school (or asilo steineriana, as it is called here) the Festa di San Martino is a nocturnal one and lanterns made by the students in class replace the clanging pots and pans of the usual daytime celebrations in Venice--an example of which you can see here:

The use of lanterns is typical of German celebrations of the holiday, but the plan this year at my son's school was to incorporate a distinctly Venetian element into the procession with the use of boats. I was going to be one of a few parents who would row the students--who'd be singing the songs you see below and shining their lanterns--in three traditional wood boats (specifically mascarete) along the canals of Canareggio.

The weather, however, did not cooperate. There were high winds and rain throughout most of the day and, though both had diminished somewhat by the later afternoon, the weather as evening approached was still too wet and windy to make the prospect of a boat ride very appealing (or safe).

So I didn't end up with any photos of the boats as I'd hoped, and the large enclosed garden in which the kids walked and sang was so dark as to make picture-taking almost impossible--as you can see above.

But, well, I can offer you the songs below, so that any of you who may be in Venice for next year's Festa di San Martino can be fully prepared to join the singing--as, incidentally, my son almost never does.

Alas, aside from Lucio Battisti's "La canzone del sole", Sandro's favorite song to belt out is one he learned from a friend whose family has lived in the lagoon for nearly 1,000 years--about a grandfather with uncontrollable flatulence.

After the Storm, San Marco

As I post this we are actually right in the middle of a storm, so the title is wishful thinking at this point.

Two weeks ago we had the highest acqua alta in two years (140 cm above sea level). This morning it has been even higher: 150 cm, for those of you keeping score at home (as they used to say on radio broadcasts of American baseball games).

Not knowing the state of things this morning, Jen and Sandro went to Via Garibaldi to find that their normal rain boots were not high enough for the waters there--which had, in any case, closed all of the stores that are usually open for a few hours on Sunday morning. In Piazza San Marco a little flat-bottomed sandolo would be the only good way to get around. Though, actually, the water is so deep a motor boat would also work.

The photos above and below were taken by a visiting friend near the end of September, after one of those sudden late afternoon storms that can seem so refreshing in late summer and early fall. Today's storm is a low gray one, and gives little hope of concluding with such dramatic lighting. I think we'll be looking at a dim early sunset today, when the sun, who really hasn't bothered to get out of bed today anyway, simply burrows deeper under the cover of clouds and calls it an early night.

But we're going to a San Martino Festa this evening, so perhaps something will come of that. We'll see--and hopefully I'll get some photos so that you will, too.

This evening Sandro took his first photo using a tripod, which you can see above.

Then to better understand the function of a tripod, and something about the way a shutter works, we experimented on the vaporetto ride home with long exposures, no tripod, and very wiggly hands, which you can see below.

I know Sandro liked the tripod, as he likes anything mechanical, but I'm not so sure he didn't like the wiggly approach even better. 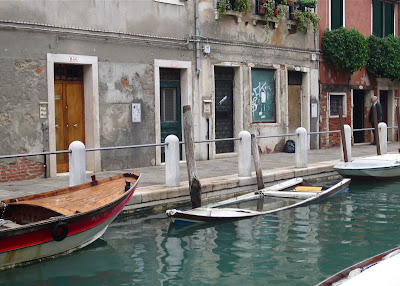 For the last two weeks every new day has seemed to bring a couple more periods of acqua alta, but considering the fact that the water level in the above photo is well within the bounds of the canal the trouble confronting the owner of the above boat is not high water but a problematically low boat.

I asked someone who lives on the above fondamenta if the boat was abandoned, but he assured me it was not. Though falling water is generally considered much less newsworthy here than rising tides, we've had a lot of rain recently and my informant warned me that the above is the predictable result of simply neglecting to bail your boat.

What writer wouldn't appreciate the kind of editorial assistance depicted by Giambattista Tiepolo high up on a pendentive of the Sagredo family chapel in the church of San Francesco della Vigna?