Local Color: At Home and Abroad 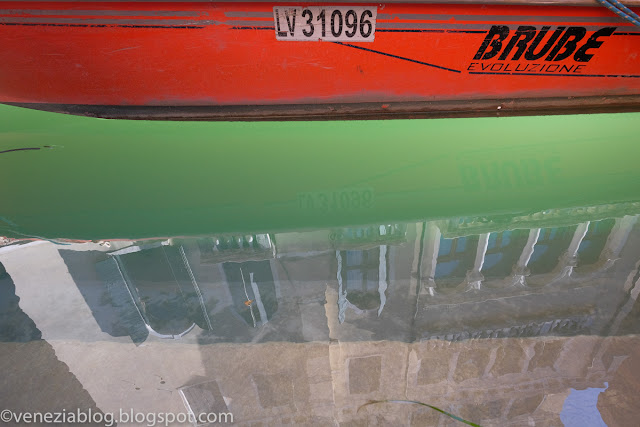 I suppose the images above and below might be considered pictorial examples of synecdoche, in which a part of something is used to represent (or suggest) the whole. A linguistic example would be to compliment someone on their new "wheels," when it's understood that, in fact, it's the entire new car you're praising.

The image at top suggests, at least to me, something about Venice as seen from a more local rather than touristic point of view--specifically, the point of view of my son (and his friends), to whom the boat manufacturer Brube, and its most popular model in Venice, the cofano, occupy a central position in his conception of, and concerns about, the city.

To me, in contrast, the colors takes precedence over all else--and that peculiar and fleeting phenomenon, seen only in certain rii (minor canals) and only at certain hours during certain times of the year, when the sunlight seems to illumine the water from below, like a gallery lamp shining through milky green murano glass.

The image at bottom is from Berlin, where we've been staying for the last week, and was inspired by the nagging sense I got as I passed and re-passed the old rusting scooter that the subtle harmony of colors and tones represented my initial impression of the city as a whole better than any image of a famous landmark or a crowded street would. A sense which I suppose had something to do with how the element of passing time seems to appear in this frozen moment, too: in the sense that the scooter had come into such tonal harmony with its surroundings only gradually, as parts of its body rusted to tints quite in sympathy to its setting.

In any case, the experience of taking each image reminded me that the aim of so much of our travel photography is of course to capture the exemplary (at least when we don't give in to the temptation to shoot everything we happen upon, in the desperate quasi-encyclopedic attempt to bag all those views that threaten to overwhelm us with their beauty or novelty or interest): to capture the view or handful of views that represents the very essence of the place. Often such views will be the same views everyone else can't help but take of a famous place. Amazed to find the famous sight looking just as we've seen it look second-hand, in images taken by others, we take one, too! It's hard to resist.

But sometimes what strikes us as exemplary is more idiosyncratic, and represents something, or means something, only to us. Which I think is quite okay. Maybe it's even a worthwhile goal sometimes. Though of course we run the risk of returning home with--or posting on a blog, as the case may be--images that bore others to no end. 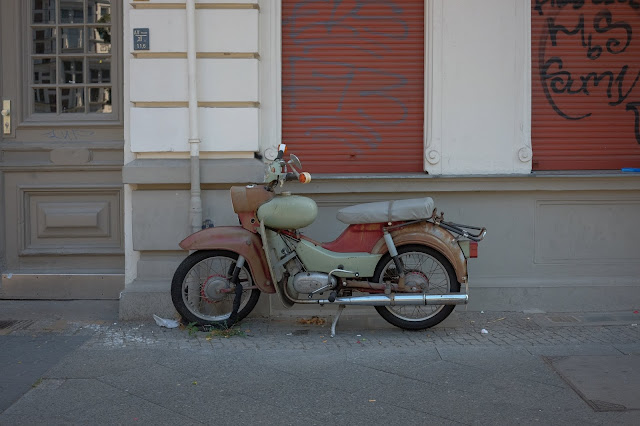 Posted by Steven Varni, aka Sig. Nonloso at 9:33 PM No comments:

Email ThisBlogThis!Share to TwitterShare to FacebookShare to Pinterest
Labels: Lido

Posted by Steven Varni, aka Sig. Nonloso at 11:09 AM No comments: 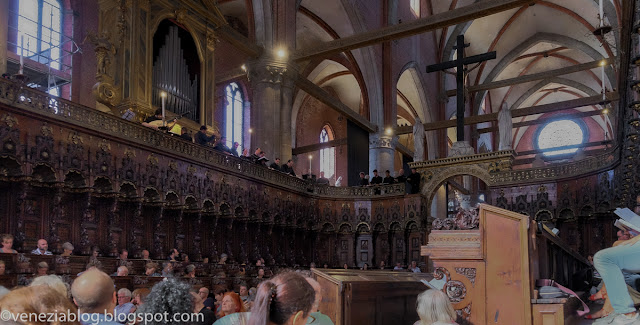 It's been 500 years since Titian completed his famous altar piece for the basilica of Santa Maria Gloriosa dei Frari and this afternoon, on the Feast of the Assumption, the work and its subject were celebrated with an inspired performance of Monteverdi's Ad Vesperum Assumptionis Sanctae Mariae Virginis by I Solisti della Cappella Marciana, under the direction of Marco Gemmani, sung from the top of the 15th century choir stalls, just a stone's throw from the composer's final resting place at the front of the church, and performed as the piece was thought to have been performed on this day in 1640. 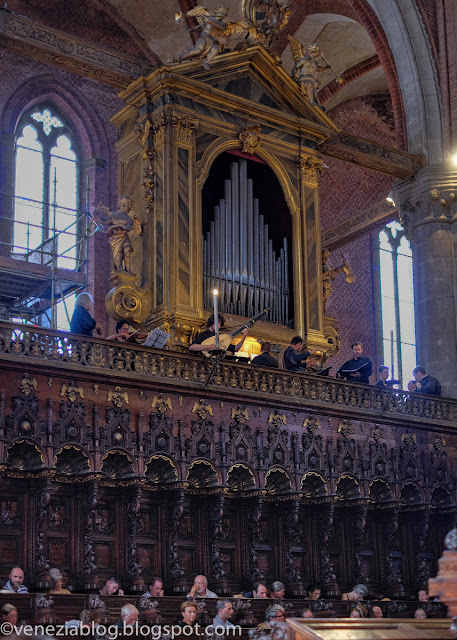 Email ThisBlogThis!Share to TwitterShare to FacebookShare to Pinterest
Labels: Churches in Venice, Events in Venice 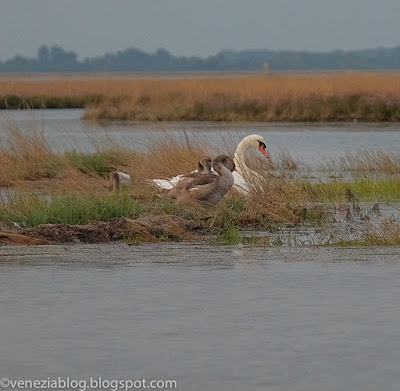 Posted by Steven Varni, aka Sig. Nonloso at 1:20 PM No comments:


"What time does Venice close?" a tourist is reported to have once asked, assuming the city was nothing more than a theme park.

I can no longer remember where this well-known query first appeared, as it has since reappeared in so many articles on the city, but in terms of Venice as a living, livable, and merely inhabited city, the answer strikes me as becoming ever harder to ignore: It's in the process of being closed down right now.

In the eight years since we first moved here the transmogrification of the city's dwellings and businesses into an ever-more exclusively tourist use and orientation is striking, and it seems, actually, to be picking up speed--in the way things do when they're circling the drain.

Of course, Venice has been known as a tourist-oriented city (or tourist trap) for at least two centuries. This is a fact in which I used to take a certain comfort as I read accounts of the city written 60 or more years ago--when its resident population was still well over 100,000--which already characterized it as little more than a "museum" (if not yet an amusement park).

But the changes of just the last few years alone are too stark to be ignored, and even businesses that should have a certain appeal to tourists--or at least tourists as they once existed--are shuttered. (I just came upon a short piece by Donna Leon, who moved out of Venice a few years back, that suggests just how stark.)

The latest and largest example of this is last month's closure of the department store Coin, a short distance from the Rialto. Originally opened in 1947, a couple of years ago it underwent a makeover in the interest of appealing more to tourists, foregrounding the kinds of portable "luxury" (ie, useless or at least unnecessary) items which the contemporary tourist seems compelled to hunt compulsively like Easter eggs in every location they visit.

I don't know whether these changes increased their sales, but given the fact that last spring their landlords demanded an increase of 500% on the new rental contract, even a significant increase in sales might not have proved adequate. Coin countered with an offer of 350%, but this was deemed insufficient and its 94 employees found themselves out of work.

The fractured familial relationship between landlord and and tenant in this case might make one wonder how much personal antipathy entered into the business of agreeing to a new contract, but it's really a moot point, as such rent increases are common.

Indeed, the area that Coin had long anchored between Campo San Bartolomeo and Campo Santi Apostoli has become in just the last two years one of the deadest of what I think of as the many dead zones in Venice. (Dead zones are those oxygen-less areas of the ocean created by human activity in which no marine life can survive--in Venice such zones are devoid of any trace of resident life.)

Not that it's not crowded. On the contrary, the narrow Salizada San Giovanni Grisostomo that runs past Coin is one of the city's worst bottlenecks of tourists. But that stretch has become almost indistinguishable from any mall in any number of places in the Western world: you could be in New Jersey or Iowa or my hometown of Modesto, California. It features an American fast food chain (which replaced a decades-old local restaurant), not one but two chain candy stores, two gelato shops, and then the same mix of disposable clothing and souvenirs aimed squarely at a tourist market which, it seems, can be counted upon to snap up absolutely any mass-produced crap you choose to put behind a shop window.

The huge number of tourists passing through the area has made landlords feel justified in demanding higher rents, and the higher rents make it impossible for any local-oriented business to survive there (not least of all, because locals avoid such tourist-clotted bottlenecks as they'd avoid a boatload of pestilential rats). So, the only businesses that can afford such high rents are chains: like the American fast food joint, and the two candy store chains within 20 yards of each other.


(The ruination of Venice's calli and local culture goes in waves: when trashy plastic mask shops had finally reached their limit, along came a rush of gelato shops, then take-away chip (french fry) shops without seating, then take-away pasta shops without seating, then a mass of "local delicacy" shops selling suitcase-friendly little bottles, jars and bags of stuff having nothing to do with Venice, and now chain candy stores, popping up all over and seemingly overnight like poison mushrooms, and, like a final insult, unstaffed luggage storage facilities. For nothing contributes to the vitality of a neighborhood like tourist luggage storage storefronts! And one of them is in Cannaregio, no less, one of the last refuges of resident life.)

Among the local businesses that have closed in recent months in this area was the children's bookstore that my wife helped start not quite two years ago. A not particularly prepossessing space, small and broken up into two separate rooms (the larger of which is without windows), it was still close enough to this booming strip of shopping mall to make its landlord feel justified in asking for a 100% increase in rent.

In a city whose dwindling number of residents aren't exactly known for being huge readers, and whose tourist masses, from my repeated observation, crave candy far more than they do Codussi--though the former is exactly what they can buy anywhere in the world, while the latter, the church of San Giovanni Grisostomo, is only in Venice--a doubled rent was insupportable.

Thus, the city, the city of resident life, closes down.

And lest you think I'm exaggerating the severity of this, I leave you with an article from a local newspaper translated into English on the Campaign for a Living Venice website on the possible demise of one of the city's defining landmarks, the Rialto fish market.

It seems that mass tour groups passing through the fish market to snap pictures is a poor substitute for people who actually buy something.