It is illegal to ride bicycles in the historic center of Venice. A Venetian child caught doing so is subject to a substantial multa (ticket and fine)

But apparently, as you can see from the images of this post, it's perfectly fine to ride bicycles in the canals of the historic center.

In fact, any moronic tourist willing to pay 100 euro for an hour-long guided "tour" to the shameless proprietors of this newest degradation of the city's historic waterways can do it!

Even as I type these words, even as I look at the images taken by Stefano Varponi, I feel certain that I'm indulging in one of the satires I sometimes post on this blog.

But this is no satire, these photos are not doctored or fake. The city administration really has licensed a water bike rental business in the very center of Venice.

Where no money-grubbing enterprise is considered too demeaning of Venice's long history and its traditions, too antithetical to the proper functioning of the city's waterways, too hazardous for the rubes and "thrill-seekers" who apparently cannot discern the slightest difference between the seat of the ancient Republic of Venice and any backwater port-of-call on the sleaziest cruise line.

After all, mass tourism ain't about history or culture, it's about ticking something off your "bucket list;" about the adrenaline or ego rush of having your own "special," "personalized," "individualized," "unique" experience purchased from businesses who provide them in bulk: about finding the best selfie backdrops.

How long until the first ziplines are strung across the Grand Canal?

And why should only two celebrities during Carnevale experience the thrill of descending from the Campanile of San Marco to the stones to the Piazza? Why it's positively anti-democratic! A zipline from the campanile could become a major tourist draw--and a good "populist" businessman/politician is just the type needed to rectify this great inequality (and put a nice bit of change into his own or some crony's pocket in doing so).

Four years ago I was foolish enough to think that the very last thing that Venice's waterways needed was to be turned into yet another tourist play-space for private profit. After all, not only are these waterways the arteries of the city's commerce, they were (and are) already so jammed with traffic as to be dangerous (and deadly) even to those who actually know the rules and regulations that are supposed to govern them, and those who actually know where they're going on them.

The solution devised by the city administration, however, was not to ban all manner of tourist craft on the city's waterways, but to require that tourists no longer be shoved out into them alone and utterly ignorant. As long as the tourists followed like ducklings in the wake of a tour guide all would be well.

This started with kayaks. It has continued with paddle boards, which not only look ridiculous in the city's rii, but seem ill-suited to managing the wakes created by water traffic. And now it has metastasized into the even more ill-suited water bikes. Which, as you can see above, overturn in even a quiet rio.

But, I can hear the proprietors of such rental services objecting, we are the good guys, we give ECO tours!

Ah, yes, "eco", the magic word of what's known as "green-washing" when it's used, for example, by oil companies in their marketing campaigns. The latest in that long string of magic marketing words, each evoking its particular era and the (feigned) principles of their panderers: "all-natural," "low-tar," "low-fat," "hypo-allergenic," etc.

True, kayaks and paddle boards and, now, water bikes do not use petrol. And yet when introduced into the waterways of the historic center their effects upon them can ultimately be as deleterious to that unique setting as algal blooms are to marine ecosystems. And I doubt that dead sea birds and fish take much consolation from the fact that a human-induced algal bloom killed them instead of an oil spill.

Moreover, the particular "eco" proprietors of this new water bike venture, progressive as they almost certainly consider themselves to be, don't take too kindly to open discourse. After I posted my thoughts on the damage their new business does to Venice and the hazards it present to its customers in the "Reviews" section of their Facebook page--and after my review began to receive "likes"--not only did my review disappear from the page, but so did the entire "Reviews" tab.

Like Venice's non-resident "first citizen" himself, it seems the last thing that the fine proprietors of this new tourist business want to hear are the thoughts of Venice residents on their little venture.

(And, by the way, who are the proprietors of this new venture? They don't identify themselves in the "About" tab of their Facebook page. Are they Venetians exploiting their own city or outside "entrepreneurs"?)

Last summer I sarcastically wrote that I was planning to start my own "eco" guided tourist experience on Venice's historic waterways with inflatable human hamster wheels, as below. 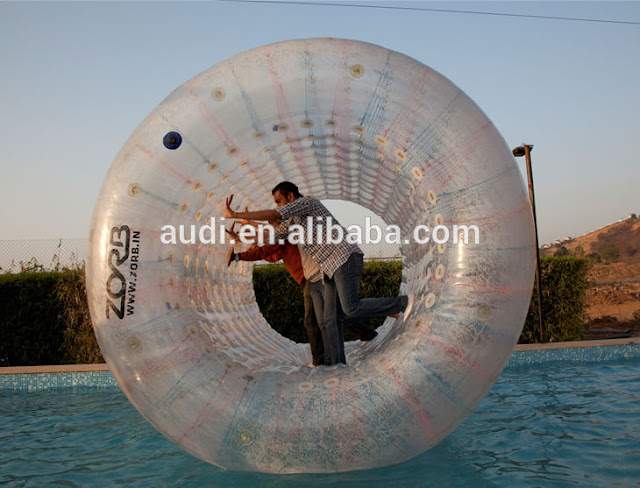 But given the way in which the mis-administration and exploitation of Venice continually outruns even the most bitterly sarcastic gallows humor, I wouldn't be surprised to find them available for rent on the Grand Canal by next summer at the latest.

Posted by Steven Varni, aka Sig. Nonloso at 7:43 AM