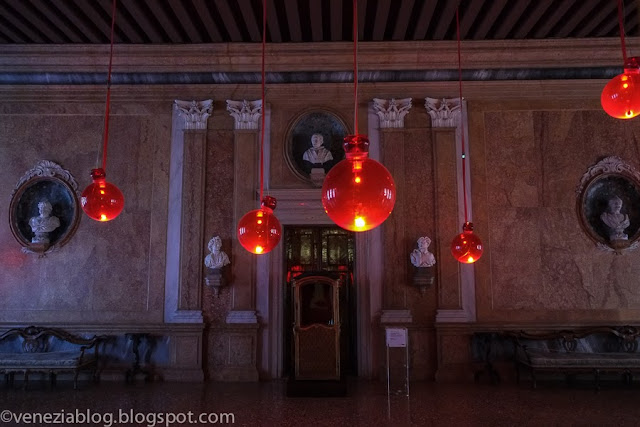 The blown glass lamps of Heimo Zobernig in the portego of Ca' Rezzonico; part of the A Very Light Art exhibition, which runs until 24 November.

I'm still on the road in the US, no time at the moment to write anything more, but more information on the exhibit may be found on the link below: 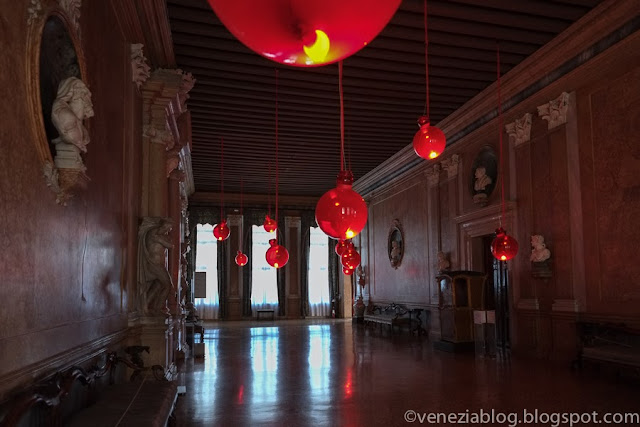 Posted by Steven Varni, aka Sig. Nonloso at 10:15 PM No comments:

Email ThisBlogThis!Share to TwitterShare to FacebookShare to Pinterest
Labels: Contemporary Art in Venice, Museums of Venice

If I weren't traveling right now the work of Sarah Sze in the US Pavilion at the Biennale would probably inspire any number of reflections on the nature of the sublime: from Longinus's first ancient formulation of it, through Kant's, to recent notions of it by the French theorist Jean-François Lyotard. In other words, Dear Reader, consider yourself quite lucky that I'm on the road.

The true experience of the sublime, according to all these folks, might in the loosest sense be termed mind-blowing. Whether experienced in Nature (amid, say, the Alps) or in a work of art (in, according to Lyotard, the most ambitious works of Jackson Pollock), we know that we stand before the Sublime when the magnitude, majesty, immensity, complexity and awe-inspiring beauty of what we're looking at seems to exceed our capacity to take it all in, to make sense of it according to our usual categories of thought.

The marvelous thing about Sze's works in the Biennale is that this sense of the sublime is inspired in the viewer by complex constructions of the most common household items: a whole solar system, for example, as seen above, composed of Krispy crackers, bottled water, Pringles potato chips, rocks and yarn and hardware store items... Its concrete quotidian yet still remarkable beauty is very much in the tradition not just of artists such as Rauschenberg or Jasper Johns, but of a poet like William Carlos Williams.

The poet Charles Simic wrote a great little book about what he called the artist Joseph Cornell's Dimestore Alchemy. In these works of Sarah Sze we're introduced to a kind of Hardware Store Transcendence. 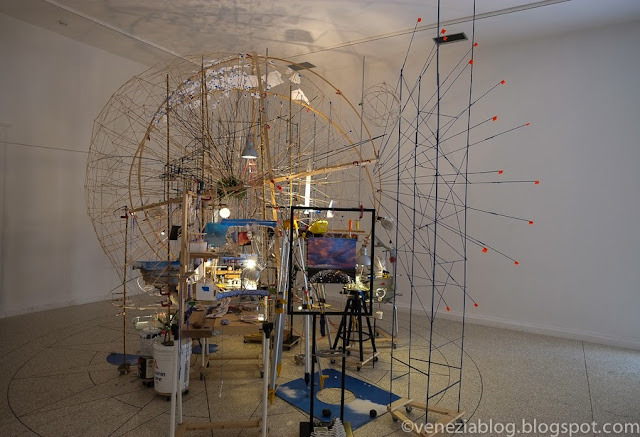 A Great Painting, Both Accessible and Obscure in S. Gio Grisostomo

It's understandable that some great paintings in Venice don't get the attention they merit because of how far afield they are from the well-trodden routes, but I suspect that other works--not necessarily the most famous ones, but still extraordinary--tend to get slighted precisely because of their proximity to the busiest calli in the city.

For example, when we first came to Venice I often found myself swept blindly along by the heavy stream of pedestrians between Strada Nova and the Rialto right past the little church of San Giovanni Grisostomo, though its rosy facade is among the more charming ones in the city. 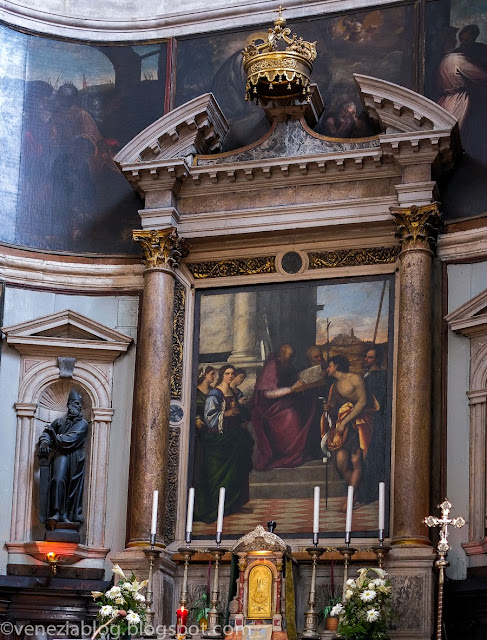 Of course Giovanni Bellini's great late altarpiece of Saints Jerome and Two Saints is the big draw inside the church, but it seems to me that people, including myself, never linger as long in front of that painting as might be expected--as if the ceaseless flow of humanity past the church's two doors exerts a pull to keep moving that's hard to resist.

And for a long time I almost completely ignored Sebastiano del Piombo's main altarpiece pictured above. For one thing, no matter when one visits it's almost always in deep shadow. For another, an altar rail prevents one from getting anywhere close to it.

But after repeated visits, I've found that it's become one of my favorite works in the city--almost a companion piece in my mind to Giovanni Bellini's masterpiece in the church of San Zaccaria (which I can never see often enough): http://veneziablog.blogspot.com/2013/01/this-morning-in-san-zaccaria.html

In any case, we're still in the midst of traveling and I have little time to write--and even less to think about what I'm writing--so for more on this little church and its two great paintings I refer you to The Churches in Venice website post on it, which includes the interesting opinions of both Ruskin and Henry James on these paintings: http://www.churchesofvenice.co.uk/cannaregio.htm#sangiovgrist

The ease with which one can visit the Sebastiano del Piombo belies the great effort it takes to really see it, but I've found the effort to be well worth it.
Posted by Steven Varni, aka Sig. Nonloso at 11:51 AM No comments:

I'm not sure whether you should take this post as a sign of homesickness, as it's only been 3 days since we left Venice and arrived here in our old neighborhood of Brooklyn, NY and we're quite happy to have the chance to visit after nearly 3 years away. But this morning I sought out the Montauk Club, the closest approximation one can find of Venice in New York City.

The clubhouse was constructed in 1889-1891 by (according to Wikipedia) prominent members of the area excited by Brooklyn's economic boom after the construction of the famous bridge to which it gave its name. (Before the Brooklyn Bridge, Brooklyn was a city in its own right; afterwards it was incorporated into the city of New York and became one of the city's 6 5 sestieres boroughs).

The club, like many such clubs, fell upon hard times in the last decades of the 20th century and was forced to sell its upper two floors as apartments. In recent years, however, the club (located near Frederick Law Olmstead's and Calvert Vaux's Prospect Park) seems to have enjoyed a bit of a renaissance.

Sandro did not accompany me to see the Montauk Club, but Venice seems to be never too far from his mind, much as he's enjoying it here. On our first morning here, walking down streets he last saw when he was still just 2 years old, he paused and pointed to a row of "brownstones" (or townhouses like those below) and announced, "The people here are very clever."

"What makes you think that?" I asked.

He pointed at the stoop of one of the brownstones, at the flight of steps leading up to the front door, and said, "They put their front doors up high here, to keep out of the acqua alta." 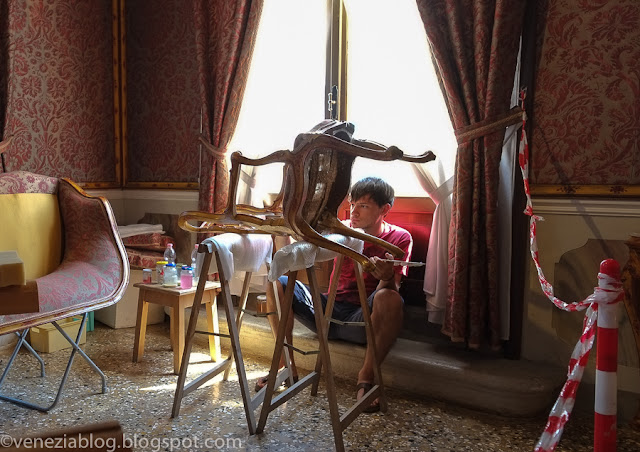 There's always something interesting to see, or see in a new way, at Ca' Rezzonico, but I'd never before seen any restorers at work there. The man in the photo above was working in a front corner of what's called "The Throne Room" (after a large impressive gilded seat of that sort) on one of a suite of chairs originally belonging to the Barbarigo family whose creation is attributed, according to the Ca' Rezzonico website, to Antonio Corradini, "a sculptor from Este, active in Venice up to the 1720s."

So much of the extensive restoration work required in Venice is decorously veiled from public view or takes place off-site that I was surprised to find this man and a colleague working out in the open, cordoned off from museum traffic by just a couple of sawhorses and some striped plastic tape. His colleague, who was at work on a couch--part of which you can see in the photo above--didn't want her picture taken. I could easily have lingered for a fairly long while looking on, perhaps a little envious of the skill and training that allowed them to engage in a hands-on way with the past, but I took just this one photo and left them in peace, to work on those perfect examples of what Marcel Proust called (in another Venetian context) "the past risen familiarly up in the midst of the present"--objects Proust considered essentially "inviolable", capable of "pushing aside the present," no matter how much touching up they sometimes need.

A True, Present-day Bridge of Sighs--and Lots of Dead Fish 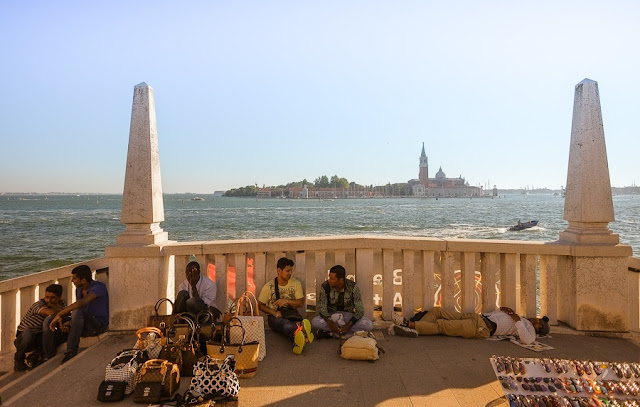 As I type this at 7:40 pm the temperature here in Venice is 31℃ (88℉), but with the humidity it feels like it's 38℃ (100℉). We're at the beginning of a heat wave. Last week--prior to the heat wave--there was a mass die-off of fish in the lagoon, thousands of them could be seen floating everywhere, even in the Grand Canal.

In its best Death in Venice-style, the city's official reassuring response was that this kind of thing wasn't out of the ordinary when the weather turned hot, it's happened before. But last week--unlike today and the forecast for the week ahead--was no hotter than usual; than last summer, for example, and there were no mass die-offs of fish last year.

The slightly more in-depth official response was that the fish suffocated to death; that the warm weather had encouraged the growth of algae in the water which robbed it of oxygen. Of course, algae growth is made much worse by the presence of certain man-made substances in the water, such as phosphates, and there's concern that there may have been a release of other pollutants into the lagoon. Some people have complained of a particularly unpleasant chemical smell on the lagoon, but the official response has been that tests show the chemical plant in Marghera is not at fault.

Gianfrano Bettin, Venice's Councilor of the Environment, was quoted last week as saying that "the situation in the lagoon is quite normal (my emphasis). The absence of wind and currents has caused overall warming of water in the lagoon, which has led to obvious difficulties for native species, especially in the southern and central areas of the lagoon."

This was supposed to be reassuring, but as Venetian blogger Fausto Maroder pointed out in a post about the dead fish on his blog, isn't "the absence of currents" exactly what we have to look forward to whenever (or if ever) the MOSE gates are activated?: http://alloggibarbaria.blogspot.it/2013/07/moria-di-pesci-venezia.html

None of which I actually intended to go into in this post... Instead, my original aim was to remark briefly on the photo above of the illegal vendors (or abusivi) driven to take refuge from the heat and sun in the scant shadows of a parapet on a bridge spanning the Canale dell'Arsenale (easily identified by the pair of obelisks visible in the photo, which also adorn the roof of any palazzo on the Grand Canal in which a commander of the Venetian fleet lived).

On the hottest days of summer such vendors seem to me to be especially fearless of the law, whose would-be enforcers I imagine spend as much time as possible within the air-conditioned walls of their respective departments and as little as possible pounding the paving stones of the Riva. On such afternoons, bridges like the one above look very much like open-air markets, with scores of counterfeit bags, dozens of tripods, and hundreds of pairs of sunglasses displayed on blankets on the ground. The vendors array themselves within whatever strip of shade is available, moving as it does with the slowly passing hours, making small talk, and, I imagine, sighing beneath the unrelenting sun and heat and boredom.

As many Venetians themselves sigh, too, at the sight of the vendors in such complacent numbers: these troops of regulars, seen day-in and day-out, as familiar as the neighborhood pharmacist, but illegitimate. Ir-regulars, you could say. A part of the city fabric, but not part of it, not officially, but always always there.