Venetian Song to the Hermit Crab (or Paguro)

We were supposed to go to Sant' Erasmo again last Sunday with friends in their boat but--and I hate to say this because of the awful heat in parts of the US--it was actually too cold. A storm came in Saturday night with high winds, rain, thunder and lightning, and the winds and colder temperatures stayed through Sunday.

I was hoping to take a photo of the hermit crabs one finds off Sant' Erasmo (and elsewhere in this area) to illustrate the following very short Venetian song which will, based upon what I witnessed on our first visit to Sant' Erasmo, coax even the shyest paguro out of its shell.

Though perhaps "coax" is not quite the right word, as the song basically makes the little crab an offer it can't refuse.

Snail, snail
Come out
If you don't
I will eat you.

The first two words of the song are of course familiar from the famous Scala Contarini del Bovolo staircase near Campo Manin. And the song is also sung to garden variety snails which, unlike i paguri, are actually eaten.  (My Sicilian grandmother in California would capture her garden snails, imprison them in a glass jar and feed them a steady diet of either parsley or bread for a particular length of time I've now forgotten, and then cook them up. For herself alone, as no one else would eat them. I don't recall that she ever sang to them.)

I think that pasta e paguro has a nice ring to it, but I guess when it comes to cooking a catchy name only goes so far.

In the course of looking for an illustration for this entry I found more than I was expecting when I came upon a report online that researchers in Belfast have discovered that i paguri not only feel pain but also have memory. The short article is in Italian, and here is the link, along with the image of a particularly photogenic paguro that goes with it: 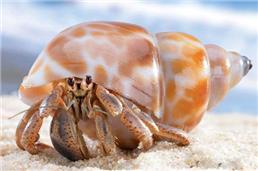 It's enough to make a guy feel guilty for singing such a bullying song to them, even if the tune itself is rather sweet and lullaby-like.

Email ThisBlogThis!Share to TwitterShare to FacebookShare to Pinterest
Labels: Music in Venice, On Languages & Learning Them, Venetian Ways 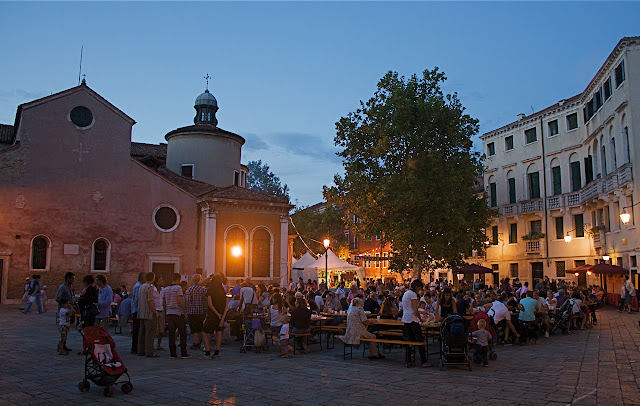 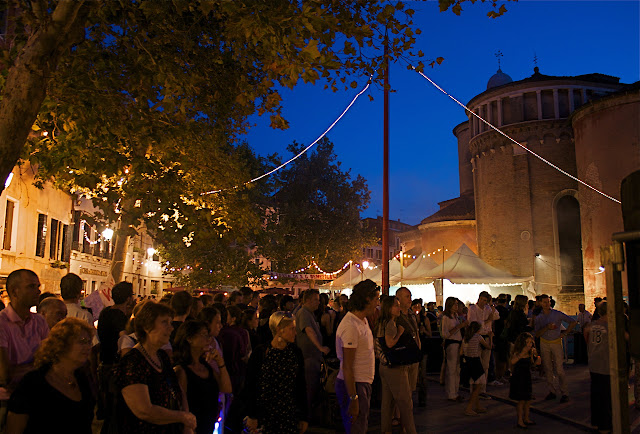 Belly Up to the Sandbar: "Locals Only" off Sant' Erasmo

There are times when one hears or reads the statement that "There are no Venetians in Venice" so often that one is almost tempted to believe it. This is something quite different from the statement that the population of Venice has been declining for decades. The latter is a verifiable demographic fact; the former is a favorite among a certain kind of English speaker (or writer) who is troubled by what he or she fears is the lack of "authenticity" to be found in the city, and who usually ends up implying (or stating outright) that the Venetians one sees in shops or in calli or campi are not quite real people at all. That they have no actual life apart from the roles they perform for the tourists.

I suppose one reason such a view is so alluring is that it seems so "knowing", so superior to all the flimflam that takes in lesser mortals.

But don't believe it.

There may not be too many Venetians left, but I've been struck by how strongly they maintain traditions very particular to the city--beyond the big spectacles that draw crowds of tourists or even the more intimate feste far away from the centro storico.

For one thing, as a Venetian recently told me, "there are two different Venices: one you experience on foot and with the vaporetti, another that requires your own boat."

As much as my wife and son wish otherwise, we do not have our own little boat. But on a recent Sunday we were invited by Venetian friends to spend a very hot late afternoon with them off--not at or on--the island of Sant' Erasmo.

Now a vaporetto does actually run to Sant' Erasmo, which seems to have its own beach scene and at least one restaurant--though I can't tell you anything about them. We never got closer than several hundred yards from the island. We like, dozens of other boats dropped anchor--to a depth of only about 3 feet--on either side of a very long and narrow sandbar some way off the island's shore and extending in the direction of the MOSE in the Lido inlet. Our friend said that when the tide is very low the sandbar is completely exposed from Sant' Erasmo to the inlet.

I feel safe in asserting (as I'm actually only repeating what I was assured) that the sandbar scene really is "locals only." I've certainly never seen anything like it. It's a little like an old American drive-in burger place, where you park in one of a long line of spaces, order your food and eat it in your car. Except in this case, you're in a boat, there are no designated places or curbside service, and the "curb" itself will, if you stay long enough, disappear beneath the lagoon.

As beaches go--well, I'm a native northern Californian, so it doesn't seem fair to make comparisons. The sand is muddy, the water is shallow and too warm for my taste, and, at least on one side of the sandbar, thick with mucky weeds.

But, then, if one is looking for a sublime Nature experience Venice is not really the place to come. At the sandbar, as everywhere else in the city, it's all about human society.

Venetians of every age hang out at the sandbar: entire families (including grandparents), groups of teens, couples of all ages. One early-arriving family, as you can see in the photo above, staked a claim to a large enough plot of sand for a table, chair & umbrella. Groups of adults meet on the sandbar as if it were Via Garibaldi to catch up. Small kids play on the sandbar and as the tide rises struggle, like their Venetian forbears, to deal with the encroaching waves all around them.

But the vast majority of people spend most of their time at the sandbar in their own boat: eating, drinking, and (that favorite Venetian pursuit) sunbathing. Each boat becomes an outpost of the family's own home: a floating living room--small but persistent examples of the Venetian talent for domesticating the lagoon.

Because it was so hot we went late in the day, for maybe 3 hours, but most people seem to spend much of the day there. One of our friends was concerned that she had seen a good-sized family she knew, including a grandmother who generally didn't fare well in the heat, setting off in their large open boat before noon to spend the entire day at the sandbar.

We didn't see this family at the sandbar but did happen to pass them in the Canale di San Pietro in Castello in their large beautiful old wooden boat as they and we made our way back home around 7:30 pm. Nonna looked absolutely fine, as did all the rest of the family--except for one member stretched out flat on his or her stomach and fast asleep near the boat's prow. A day at the sandbar can be exhausting.

Email ThisBlogThis!Share to TwitterShare to FacebookShare to Pinterest
Labels: Kids' Stuff in Venice, Living in Venice, Raising a Child in Venice, Venetian Ways 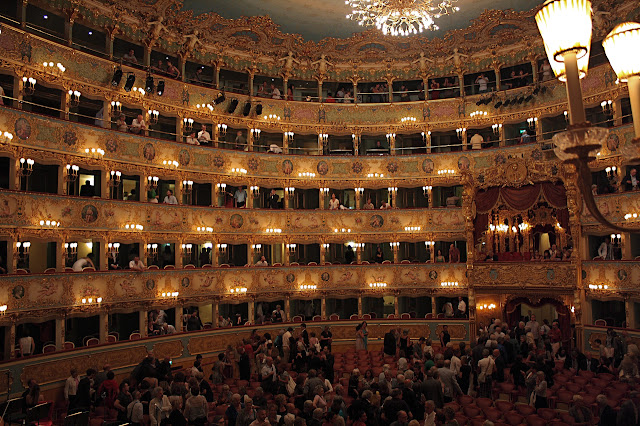 The audience leaves La Fenice after tonight's performance of Mahler's 7th Symphony by Orchestra del Teatro La Fenice, conducted by Eliahu Inbal. Considered a journey from night to day (not that anything in Mahler is ever that simple), the symphony seems the perfect selection to conclude this Festa del Redentore weekend. 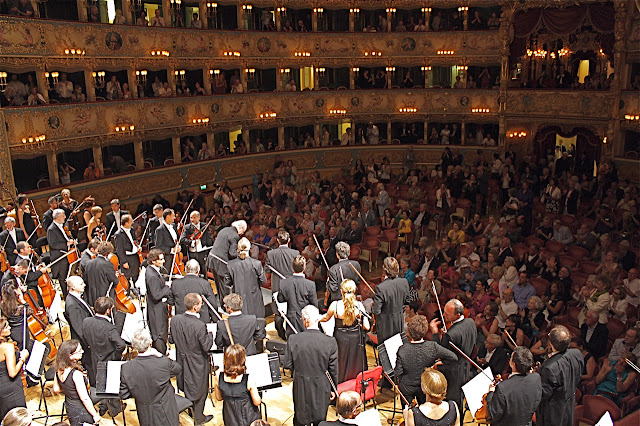 Email ThisBlogThis!Share to TwitterShare to FacebookShare to Pinterest
Labels: Music in Venice 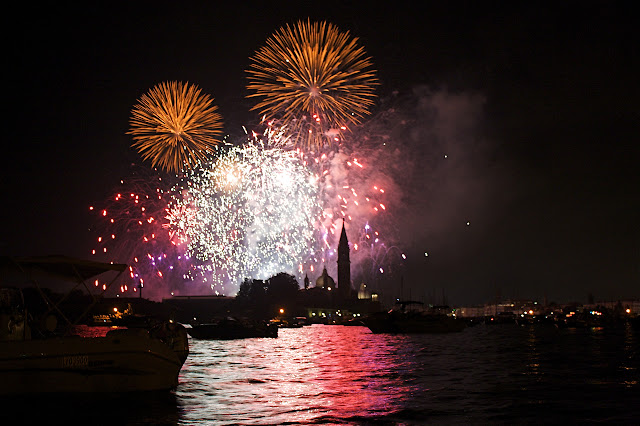 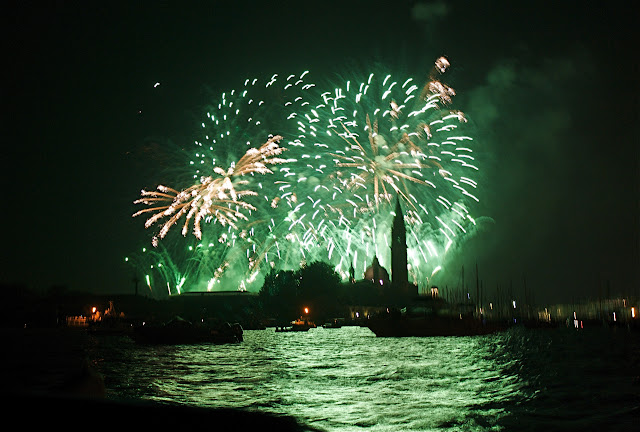 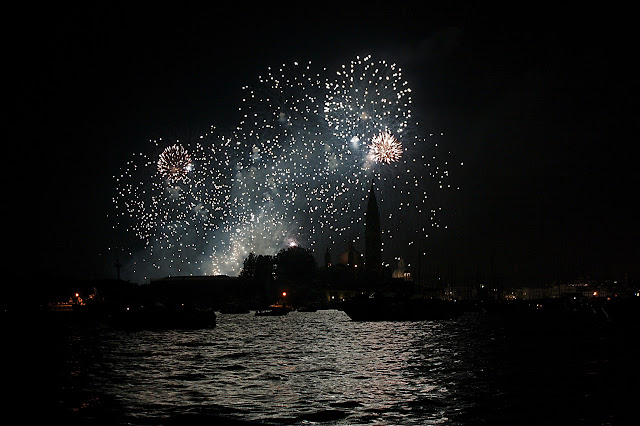 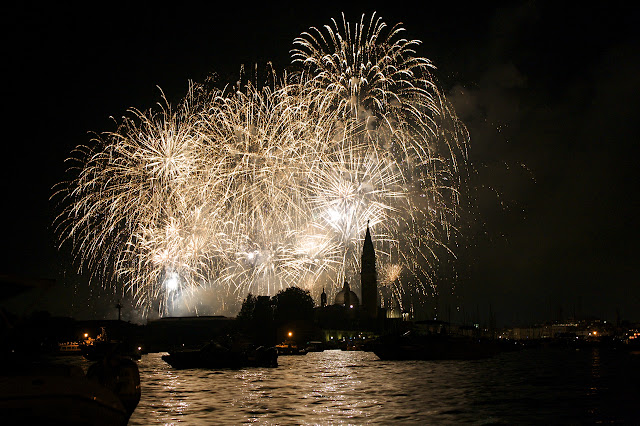 Posted by Steven Varni, aka Sig. Nonloso at 7:39 PM No comments:

Friends in I Giardini Pubblici 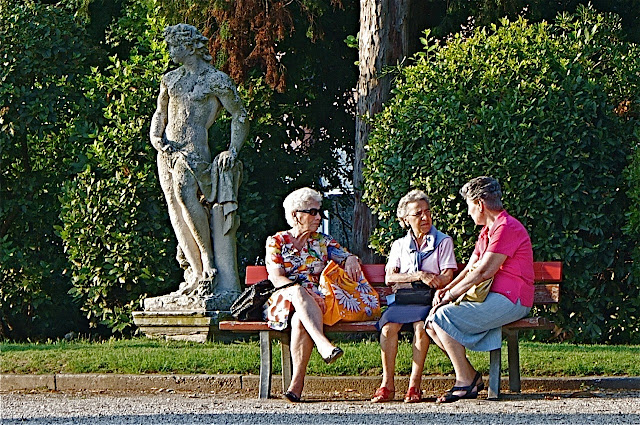 Each evening in Venice, as all over Italy, people gather in calli or campi--or via, viale or giardini in Castello--to catch up with friends before dinner (a ritual that the journalist Beppe Severgnini has called a "daily dose of social antidepressants"). It's something I've never seen in New York, or anywhere else I've lived in America. One group of elegant older women--ranging in number from 2 or 3 to 6 or 7 members on any given day--meets regularly in the public gardens right near the statue of male beauty (is it Adonis?) not far from Viale Garibaldi. I can't help but pass by without admiring their style, maintained even in the heat of summer.
Posted by Steven Varni, aka Sig. Nonloso at 3:37 PM 2 comments:

My son Sandro and I were introduced to traditional Italian puppet theatre last weekend at the Festa di San Pietro di Castello. I can't remember the last live performance of any kind I went to that was so entertaining, perhaps not least of all because the audience was so deeply engaged in it. Kids not only responded enthusiastically to any questions addressed to them by the puppets, but did their best to influence the action. I wish I'd had a video camera to record the way one little girl stood up and, with hands pressed together, pleaded with Brighella not to drink the bottle of wine that had just been dosed with magic sleeping powder by the evil magician. She could've been auditioning for the most heart-rending scenes from Open City or Aida.... Except, of course, she wasn't acting.

The play, Arlecchino, Brighella e i due maghi, was performed by Compagnia Teatrale L'Attimo.

I did not have a camera, but fortunately the local photographer Federico Roiter was there. The photos below were taken by him, and he was kind enough to let me post them here. A google search will turn up more of his excellent photos of events in Venice.

I'd only ever seen puppet shows of this type in old Italian or French movies and had always thought the kids' response was exaggerated for cinematic purposes. At San Pietro I found out it was not. 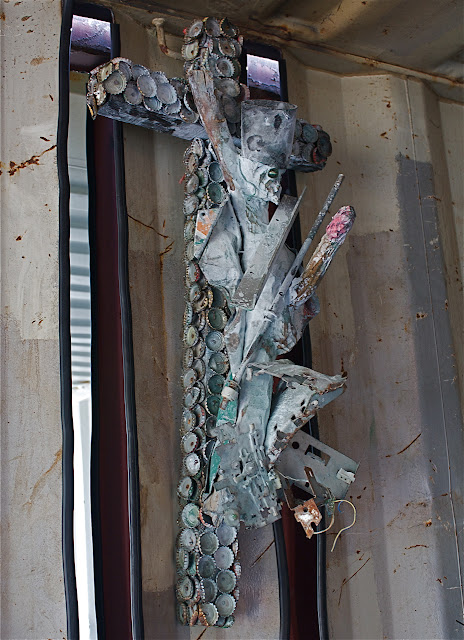 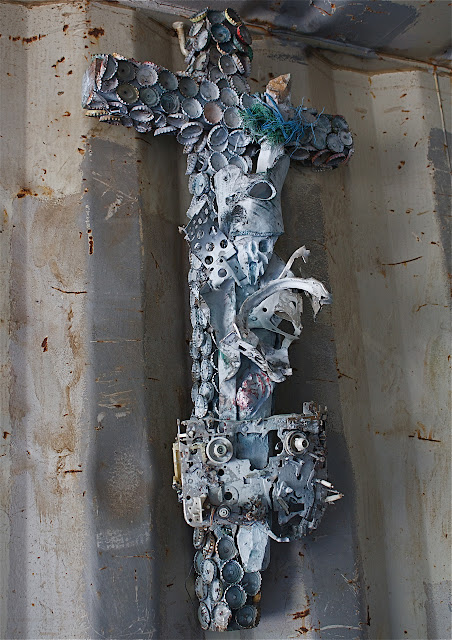 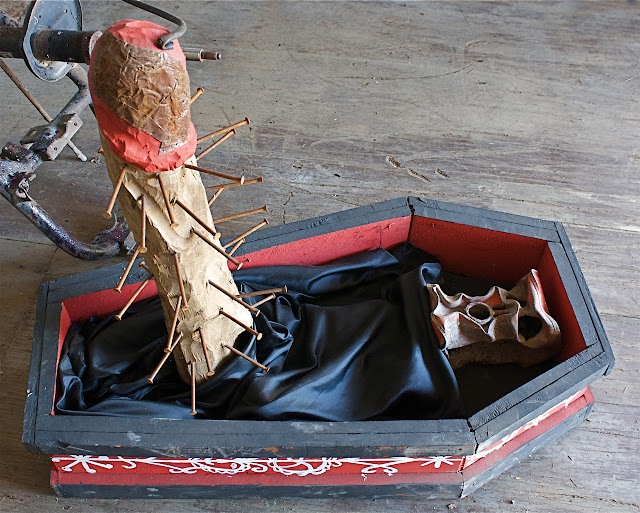 Today, July 28, was the last day for the exhibition. Tomorrow it is to be removed to make way for a massive cruise ship to dock there--where absolutely positively no one wants it. But the Haiti exhibition may, I hear, possibly travel to a museum in the Netherlands.

My earlier post on the Haiti Pavilion can be found at:
http://veneziablog.blogspot.com/2011/06/venice-biennale-haiti-pavilion.html
Posted by Steven Varni, aka Sig. Nonloso at 1:09 PM 3 comments: