Venice's Kitchen Garden and the Great Flood of '66


Most ardent fans of Venice know about the famous flood of 1966 that is said to have alerted the world to how imperiled the city was by the same sea over which it had once exercised such profitable dominion. Few people, however, seem to know of the disastrous long-range impact the same flood had on what was called during the Republic "l'orto dei dogi" (the doges' kitchen garden) and, later (and still), "the city's garden": Sant'Erasmo, the lagoon's largest island.

As in Venice, flood waters swept high into the ground floor of nearly every house, but when they receded on Sant'Erasmo the damage went beyond merely the domestic and architectural. The salt water of the flood wiped out nearly all of the island's agriculture--and not just for a season. For more than five years the sea salt left behind in the soil made it barren--this according to one island resident I spoke to with a long family history on Sant'Erasmo. He was not yet born when the flood hit. Another resident I spoke to, also with a very long family history on the island, and who was a school boy in 1966, said farming was pretty much impossible for eight years. Both agreed that the return to full yields progressed little by little after those first years. Deprived of their usual livelihood during that period, the island's farmers sought work in the factories of Murano, or wherever else they could find it.

If you take a boat past the island today you'll see that it's now fully enclosed within bulwarks against high tides, keeping it entirely safe from all flooding up to a height of 140 cm above the mean sea level, according to one farmer I spoke to. And, as you can see in the image above, each of Sant'Erasmo's inner canals is reached through sluice gates that are closed whenever the tide reaches 110 cm. Sluice gates that always seemed quaint and a little whimsical as we motored through their frames in our small boat on our way to buy vegetables at our favorite farm on Sant'Erasmo, not knowing a thing about the disaster that necessitated their construction.

Spring Blossoms in the North Lagoon 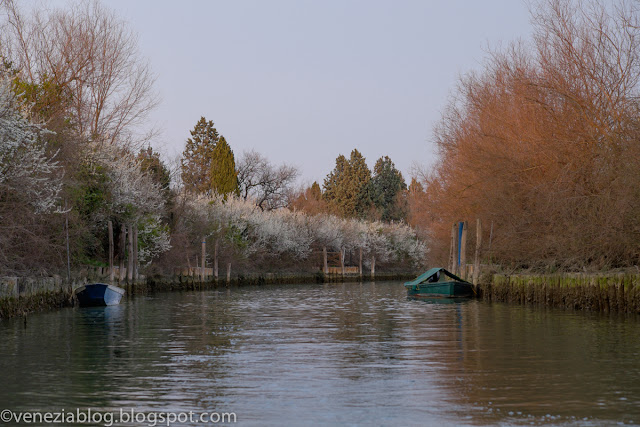 The white blossoms along the left bank of the canal are on wild scrubby little trees that produce, I am told, small plum-like fruit every other year. The fruit lacks enough flesh to make it edible, but is soaked in grappa to lend flavor to the alcohol.

Today was the holiday of Pasquetta, the "little Easter" that follows the high holy day. A day free of church-y obligations; a more intimate holiday--of immediate rather than extended family, or of friends--traditionally celebrated with a picnic in the countryside, if you live in a town, or out amid the lagoon, if you live in Venice. You can read more about it here: http://veneziablog.blogspot.it/2015/04/a-little-easter-on-lagoon.html.

This year, for the first year I can remember of the five we've lived here, low clouds vaguely threatening rain diminished the number of boats out. But we were lucky to be out on the lagoon yesterday, when the above image was taken.

Meanwhile on Sant'Erasmo... This Evening

The Easter crowds are beginning to fill the city now, which made it a good afternoon to get away to Sant'Erasmo, which, though only a short distance away, really is another world from the city all those tens of millions of people come to see each year. In the broadest sense the relatively few people who live on Sant'Erasmo are "Venetians," but only in a broad sense. They are more particularly, and quite proudly, Sant'Erasmans, and the more time one spends on the island the more one understands how well-founded and justified are their sentiments and their fidelity to the place.


Out in the north lagoon authorities are emphatic about protecting the barene (mudflats) that are so important for tempering the force of tidal surges that threaten the city--though in this case the above signs specifically indicate submerged piles in the water on the borders of the barene. Boaters are not supposed to go ashore on the barene; they are also not supposed to blow past them at high speed, causing damaging wakes. In truth, the former restriction is heeded far more often than the latter.

For more on the importance of barene in the lagoon, and how they relate to Ruskin's ideal Venetian architecture, see: http://veneziablog.blogspot.it/2014/03/ruskins-irregularities.html.

Posted by Steven Varni, aka Sig. Nonloso at 5:22 PM No comments:

The Picture of Contentment at Sant'Erasmo, and A View of Vignole 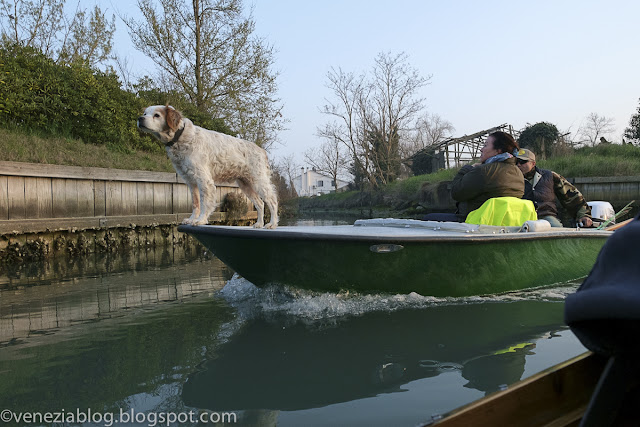 I've written  before that Venetians never appear more content--and sometimes even majestic--than when they are at the wheel or tiller of their own boat, no matter how modest it might be. The regal fellow poised on the prow of the small boat in the image above reminded me, however, that I'd neglected to note how intensely pleasant it is for their dogs, too.

Both the dog above and the house below were among the sights during last Saturday's boat ride to Sant'Erasmo, Venice's vegetable garden, and the largest island in the lagoon (though only sparsely populated). The farm we go to also maintains a regular series of weekly deliveries to a few locations in Venice; after signing up, you can even place your order online on their website (as you can read about in this piece: http://veneziablog.blogspot.it/2014/10/the-best-place-to-buy-vegetables-in.html).

You won't find better vegetables at better prices, and the weekly deliveries are quite convenient--though, if you happen to have your own boat there's much to recommend making the trip to the farm itself. 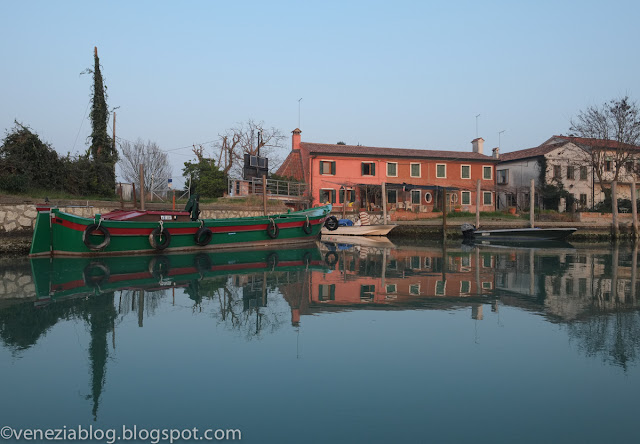 Posted by Steven Varni, aka Sig. Nonloso at 4:51 PM No comments:

Rower In This Afternoon's Glitter and Haze 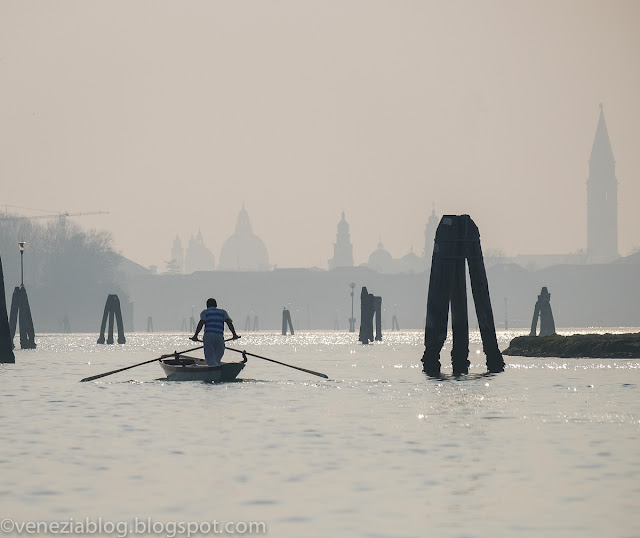 I'm afraid that without my intending it, this has become a boating blog this month: every March post has featured an image of at least one. I'll return to a broader range of topics soon, but I just haven't had much time for the blog this month and for some reason in the little time I have had I've been coming across boats. But it's really the skyline in the above image that never fails to strike me from this perspective in the north lagoon: a fairy tale collection of shapes that in this afternoon's hazy sunlight took on an appropriately immaterial appearance--like something projected by one of those old fashioned magic lanterns that figure so prominently in Proust.

When the Whole Wide World Is Fast Asleep: Venice in the First Hour of This Morning 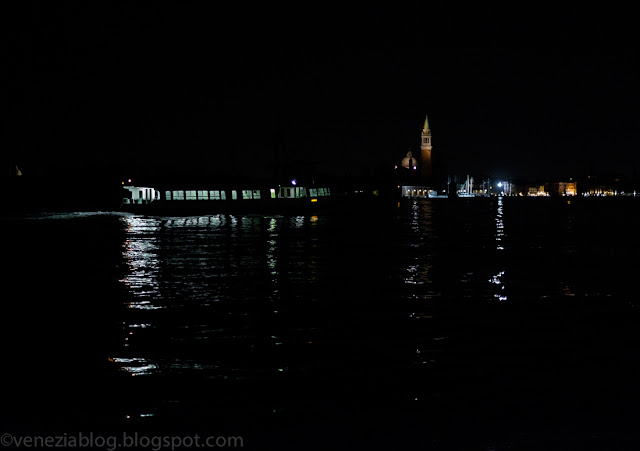 On a black night, with the moon already down, every light in the lagoon, no matter what its practical or necessary function might be--and including even those of a passing vaporetto!--seems to exist solely for the sake of spectacle.

Reading in the Open Air 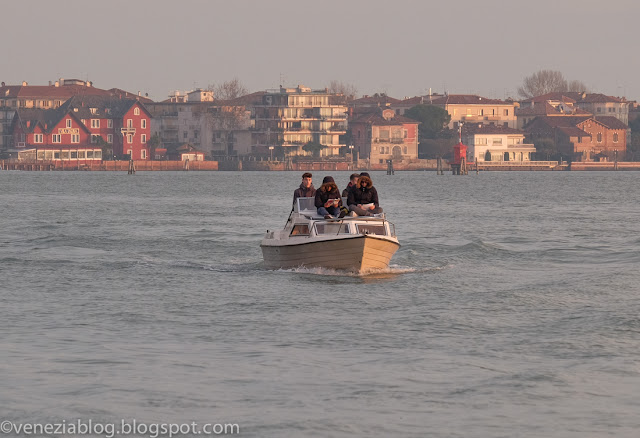 Posted by Steven Varni, aka Sig. Nonloso at 4:39 PM No comments:

Cozy on the Canal 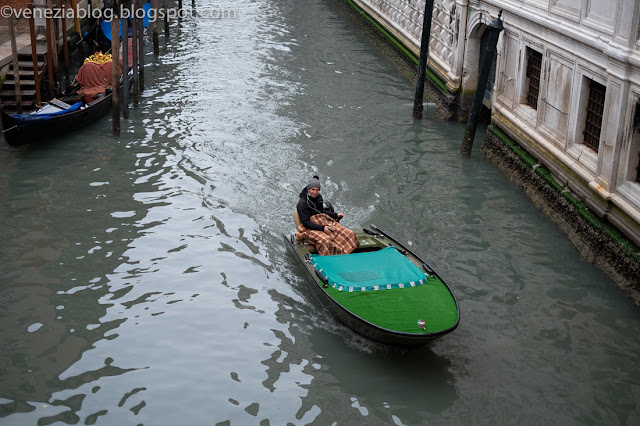 Posted by Steven Varni, aka Sig. Nonloso at 3:57 PM No comments:

Prepping for Spring, This Afternoon 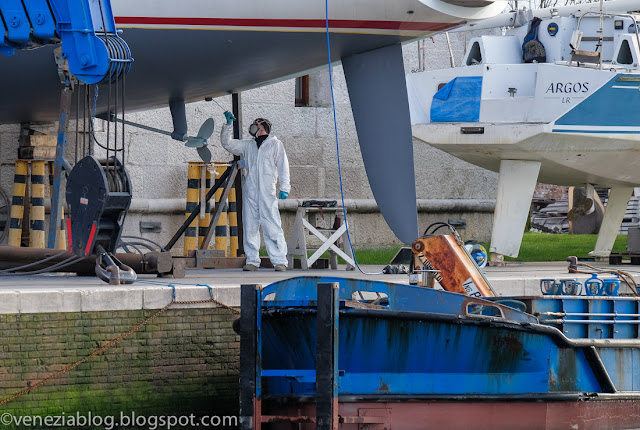