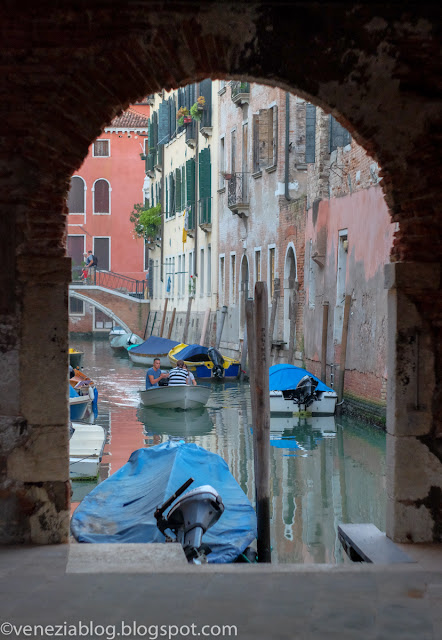 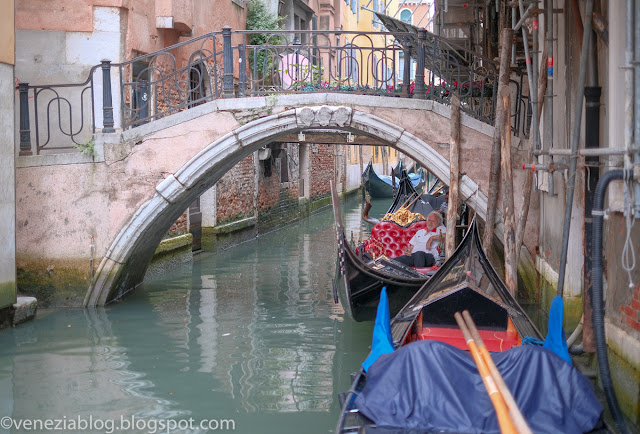 Another Venice By Moonlight, Tonight 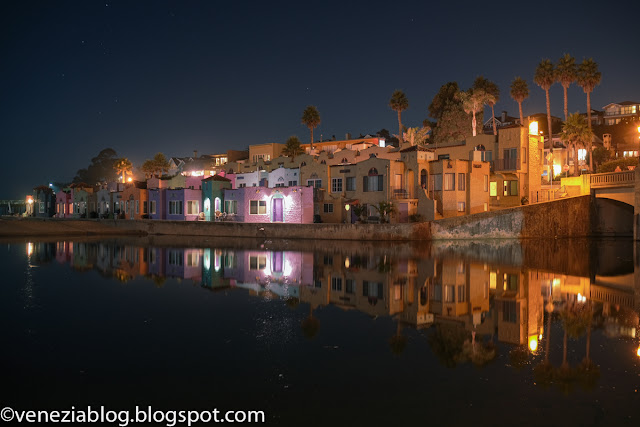 Though not as well known, nor as extensive, as Southern California's Venice, the northern California town of Capitola has its own version of La Serenissima, originally called the Venetian Courts (above). Opened in 1925, some two decades after the founding of the beach community down south originally called the "Venice of America," the Venetian Courts bear, in truth, remarkably little resemblance to their supposed model in the northwestern part of the Adriatic--aside from their proximity to water (Soquel Creek, just before it empties into the Pacific Ocean) and their brightly painted facades which, at least for certain sufferers of color blindness, might conceivably evoke Burano (though neither Buranesi nor Venetians would be pleased by such a conflation of their two communities).

In fact, the lack of resemblance between the above place from its supposed inspirations has always, at least for me, been a main source of its charm. There's something to be said for getting something so wrong as to stumble upon a certain idiosyncratic rightness all its own.

Posted by Steven Varni, aka Sig. Nonloso at 1:57 AM No comments:

In the Middle of a Monologue: Rialto Bridge, Early Morning 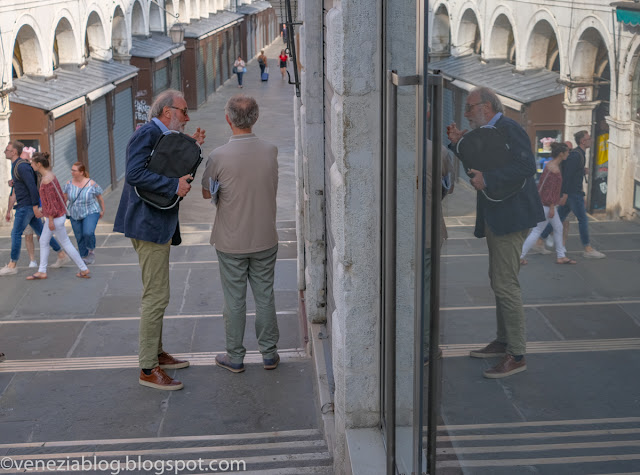 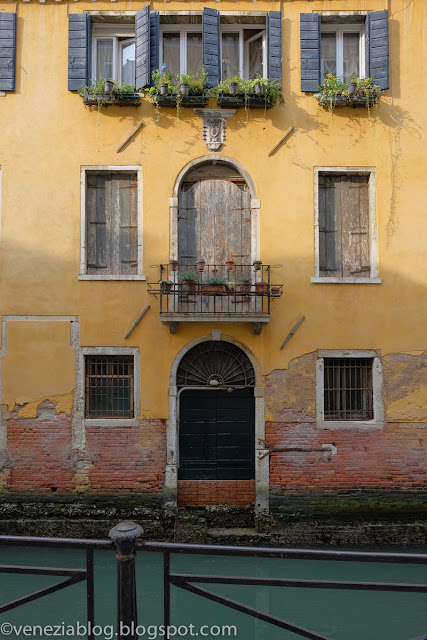 Despite his abiding concerns with moral rectitude, uprightness, and social order, John Ruskin hated architectural symmetry. In this, I suppose, he was just following in the Romantic tradition of the poet William Blake, who feared that the unbounded imagination--of the sort that could see angels sitting not just in the boughs of trees, but in the lineaments of one's fellow citizens--was, in the modern world, becoming ever more oppressed by what he termed the "fearful symmetry" of scientific and mathematical ideals. Ideals embodied in new forms of industry, which reduced living Nature to mere "raw materials," and human beings to machine-like repetition in the service of this new industry.

In Ruskin's willfully-myopic myth of Venice, the Republic's Fall from god-fearing righteousness to cynical materialism is first evident in its shift from the glorious hand-crafted irregularities and surprises of its Gothic architecture to the predictable symmetry of the Renaissance style (before becoming vulgar beyond all bearing in its Baroque phase).

But what I'm repeatedly struck by as I walk around Venice is that its buildings are never quite so symmetrical as they may, at first glance, appear to be. There's not so much a "fearful symmetry" in the three facades pictured in this post, as a kind of nimble equilibrium, a subtle and unexpected play of counterbalancing well-suited to a city whose survival has always depended upon its ability to adapt to the demands of its liminal and always-changing location between sea and land.* 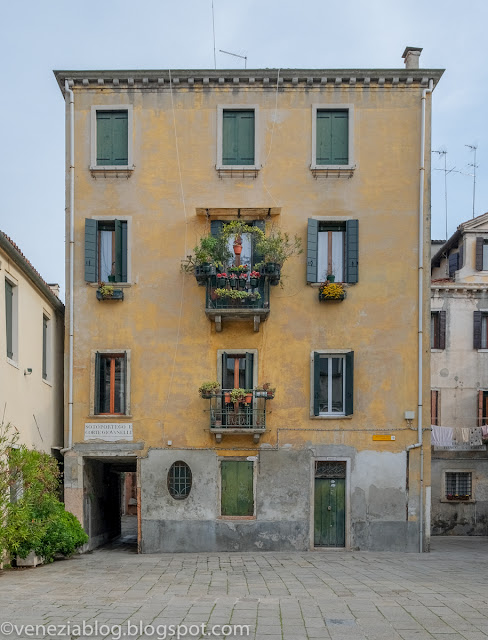 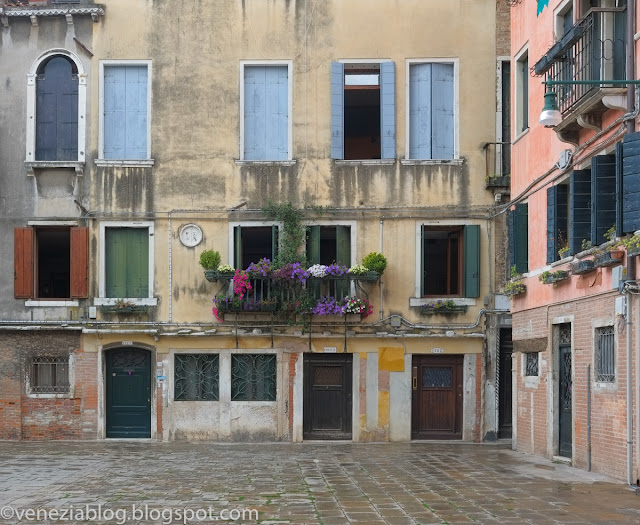 *An ability which its recent city administrations, with their costly failures--ranging from the MOSE watergates to the forever-dysfunctional Calatrava bridge--and short-sighted money-grabs suggest it may have lost.

Posted by Steven Varni, aka Sig. Nonloso at 2:50 PM No comments: 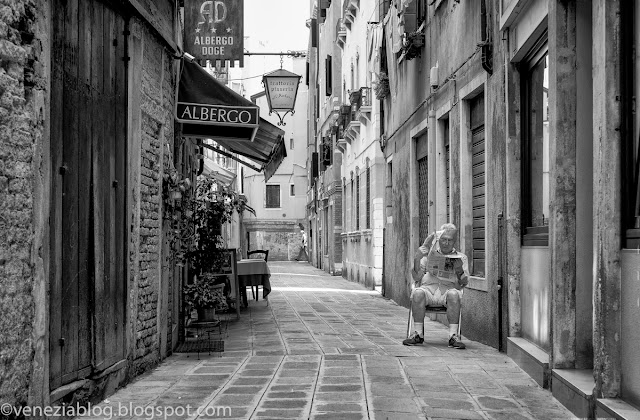