Bumper-to-bumper Traffic on the Riva, Tonight 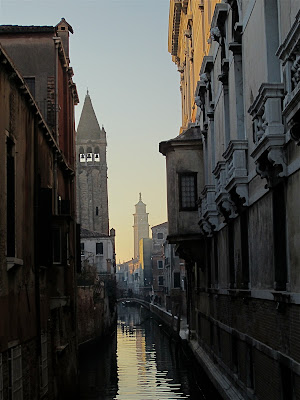 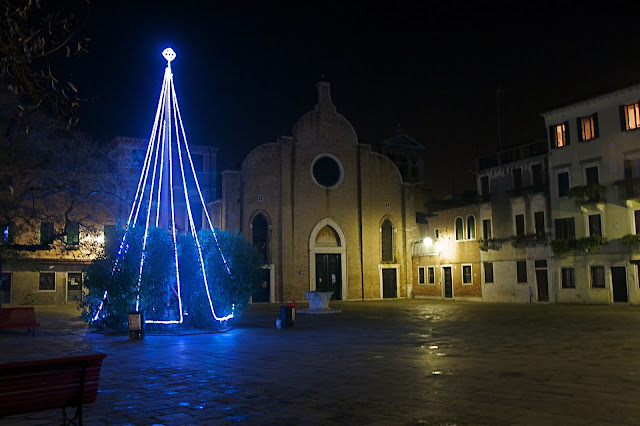 Email ThisBlogThis!Share to TwitterShare to FacebookShare to Pinterest
Labels: Christmas in Venice, Church of San Giovanni in Bragora, Churches in Venice, Scenes of Venice

The other day my wife Jen had a long errand to run and I suggested she take along our small camera, as one of the excellent photographers (Bert) who contributes to the Venice Daily Photo blog (http://venicedailyphoto.blogspot.com) has reminded me that one should never go out in this city without a camera. She seemed too focused on her particular errand to even consider the idea--but then she returned home with these.

She, like the city, is full of pleasant surprises. 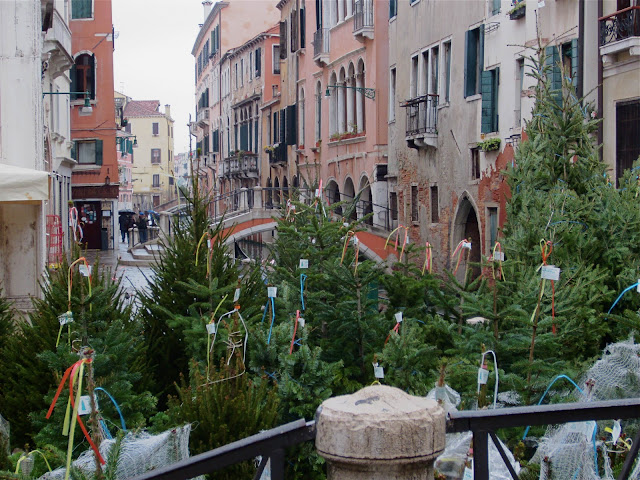 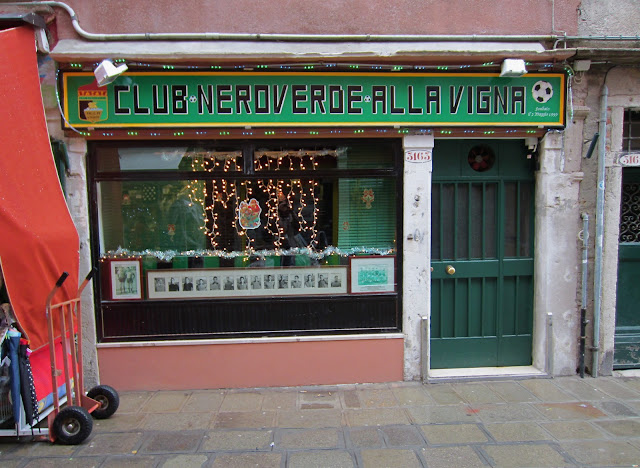 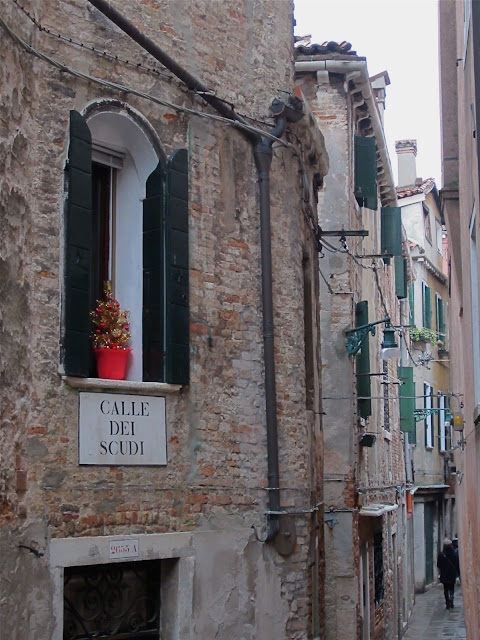 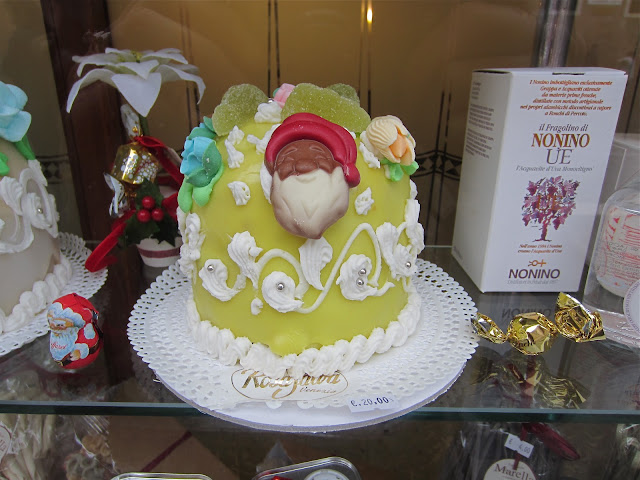 Email ThisBlogThis!Share to TwitterShare to FacebookShare to Pinterest
Labels: Christmas in Venice, Living in Venice, Scenes of Venice

Yesterday morning was the 2nd annual La Regata del Panettone, a series of races among the members of la Remiera Francescana designed, according to its planners, less as a program of heated competitions than as a means of fostering group spirit and fellowship among the club's members.

I must admit that I was involved in a small incident that had exactly the opposite effect, at least for a short time, but we'll get that to a little later. For now it's enough to know that the morning was high-def clear, and frigid (0 C, 32 F) and wavy and windy, but beautiful beyond words--and photography (at least mine). But I hope the following pics will provide some idea of the scene. 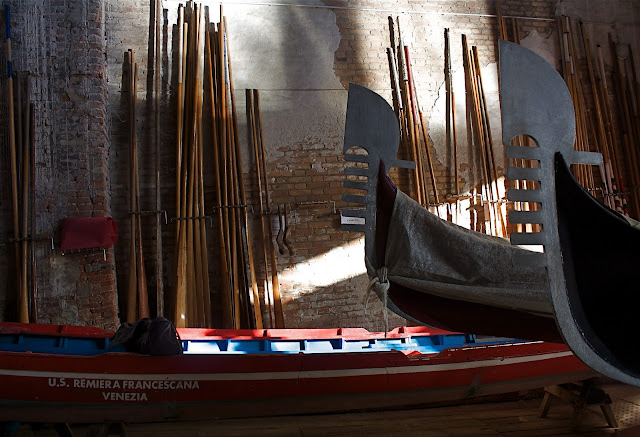 I went out onto the lagoon with my camera in a light rather shallow-bottomed mascareta, with the club's youngest member--3-year-old Valentino (who's quite a good rower, actually)--his mother, and another man who joined the club about the same time I did. It was too windy and wavy for Valentino to do any rowing on the lagoon, though he wanted to, and I rowed very little as well, as I hadn't planned on going out in a boat at all, but just taking photos from the fondamenta.

But there I was, sitting in the prow with a bundled-up Valentino, while the waves rocked us rather mercilessly and the wind blew, and our little boat meandered about the lagoon with no definite destination. I think all of us realized we actually needed a more experienced rower among us, but we were making the best of it when we noticed that the first race had started and the entire field of two-man teams was headed our way.

At this point we really could have used an experienced rower among us, but she or he was on some other boat and all we could do was first strike out in one direction before realizing the field of contestants stretched even further on that side, then, disastrously, tack back another way.

Do I need to tell you that it is an extremely unpleasant sensation to be seated in a drifting boat while an entire field of Venetian-born and bred agonisti bear down upon you?

Might I add that this sensation is even more unpleasant when you remember that exactly such a Venetian-born and bred agonisti has described such a race as nothing less than a war?

If only we could have stopped at one point right where we were, in an open expanse of water between two onrushing boats, everything would have been okay.

We could not. Onward we drifted and onward the first place team came. There was utter helpless panic in our boat and fierce shouts from theirs as, like some diabolical geometry demonstration, our two paths approached their inevitable point of intersection.

Luckily, it was fairly tangential. They managed to swerve a bit, so the prow of our boat suffered only a blow from one of their oars--instead of a full-on collision--and young Valentino got to hear some very interesting and spirited language.

How I hoped that team would maintain their lead and come in first!

But when we finally returned to the club, after that race had finished, the preparations for other heats were under way and so nothing--at least as long as I was at the club--came of our little encounter.

One Year Ago Today: White Week Before Christmas 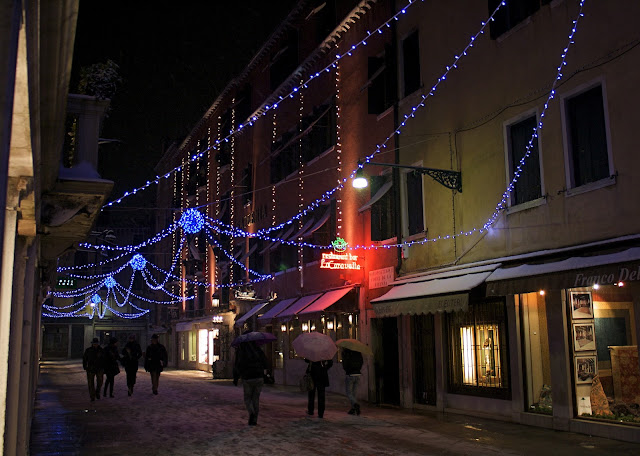 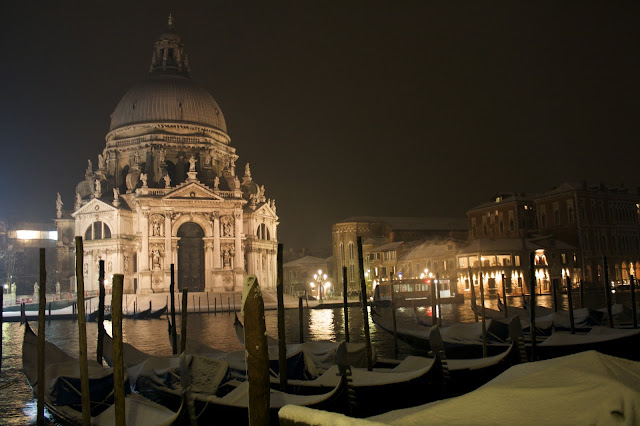 Stars Over Via Garibaldi, Tonight 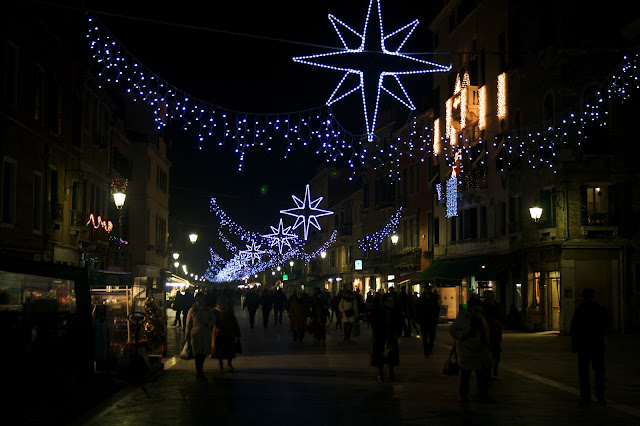 Lining Up for the Holiday Near S. Giacomo di Rialto, Today 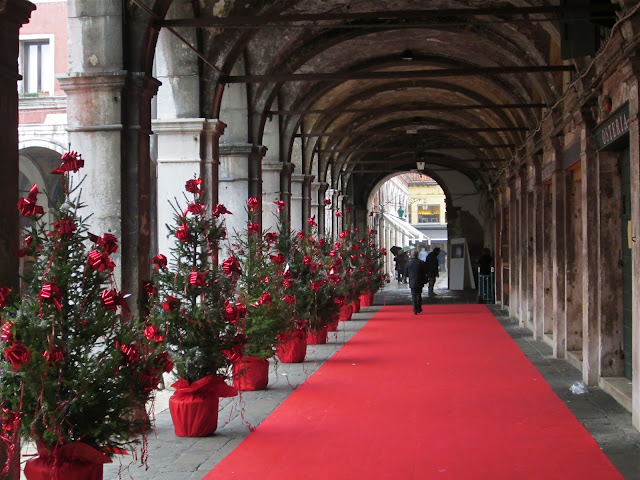 A Bit of Christmas in Campo Santa Margherita, Tonight 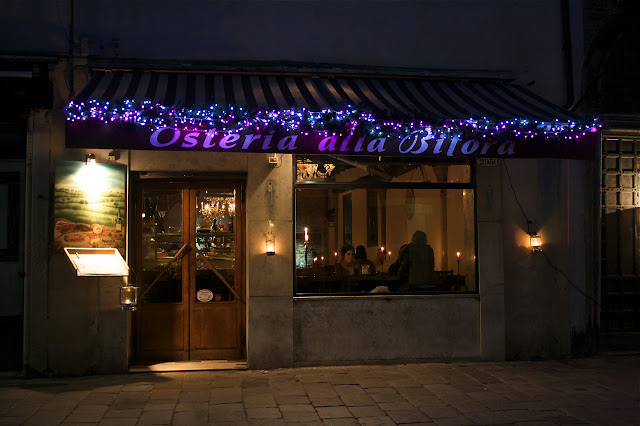 The Largest Church in Venice

If, as many people have noted, calcio (or football or soccer) is a major religion in Italy, then the largest church in Venice is neither SS Giovanni e Paolo nor I Frari, but Stadio Pierluigi Penzo which, from what I've observed, few tourists ever enter.

As recently as 2002 the Venice team--or, at times, Venice-Mestre team--was in Italy's top league, Serie A. But since being declared bankrupt after the 2009 season (as it had been after the 2005 season as well) it has vied for top spot in Serie D as F.B.C. Unione Venezia.

A local friend who has rarely attended a game since its demotion from Serie A said that the stadium used to have a great many more bleachers, which were removed as the team's fortunes declined. To attend a Serie A game in the old fully fitted-out stadium was, he told me, a thrilling and terrifying experience. Thrilling because the fans were rabid in their support. Terrifying because the old metal stands never seemed particularly sturdy and when the crowd got to stamping its feet in unison, as it often did, complete structural collapse seemed certain and imminent.

Venezia fans still stamp their feet, and sing, and jeer their opponents, and are still as passionate as before--but there are far fewer of them. Perhaps 3,000 per game, as compared to more than 20,000 in the Serie A days.

Unione Venezia sat all alone at the top of the standings--undefeated in 14 matches, with only 2 draws--when I went to my first game of the season last Thursday afternoon. It was a special holiday game against a team far below them in the standings, Mezzocorona, and Venezia played as if they resented being among the relatively few folks in town who had to work that day. Or perhaps they were contemplating the mystery of the Immaculate Conception, whose feast day it was. They certainly weren't thinking about playing defense. They were behind 2-0 at the end of the first period, and 3-0 as soon as the second one began. Nor could they conceive the least bit of creativity on the attack.

But the games are worth attending if only to observe the fans. I always sit near the large group of ultras in the Distinti section--there's another isolated group of them in the Curva Sud, behind the goal. The price for a seat in either section is the same, so I'm not sure why someone would choose the latter place, as the view is much worse, but there may be some details about each group of supporters I've yet to learn.

At least two or three of the ultras who lead the songs and chants and cheering spend the entire game with their back to the action--not even American high school cheerleaders see so little of what's going on. As there is no in-stadium screen showing instant replays, nor even a scoreboard, these young men miss everything. In the church of calcio they are the most selfless of sacristans.

But try as they might, there was no helping i lagunari this day. Venezia hardly even threatened to score. In frustration, I took to wandering all over the stands, then down close to the field, then up to the very highest most distant bleachers in the place, trying out different vantage points. But there was no beauty to be found in the so-called "beautiful game" last Thursday, at least not for a Venezia fan. So I turned my back to the field and looked out over the shipyard behind the stadium, the harbor, the lagoon. I was not disappointed.

Little City at the Edge of the World

I read somewhere that Venice is only about twice the size of New York's Central Park. After a hard day's night of travel and the sadness of having to say arrivederci to family in the States, we were happy to see it again yesterday evening--though I have no idea what day it is today.

When I sit on a certain park bench at the far eastern end of the city I often see some airliner approach Marco Polo Airport along just the route we were following when this picture was taken. If I'm not preoccupied with other thoughts I usually imagine how pleasant it is to be in a plane as it finally descends to its destination, and how excited passengers must be to find themselves arriving at such a city for the first, or fifth, or tenth time. I don't think I'd ever gotten such a clear view of the city from the air as this photo presents, so now I can imagine the experience of those on the plane much better than I ever could before. And if you are one of those on the plane arriving you can imagine at least one guy, invisible, and miles distant, watching you come in for a safe landing.
Posted by Steven Varni, aka Sig. Nonloso at 5:20 AM 7 comments:

Does everybody out there know about Libreria Marco Polo?

It's just a few minutes from the Coin department store, right behind the church of San Giovanni Grisostomo (with its great Giovanni Bellini), and always has an extremely interesting selection of new titles in Italian and a pretty broad selection of used books in English. It also has some titles in German and French, I believe, though I haven't gotten around to looking at those.

It's a small charming friendly place that reminds one that the quality of a bookstore is not measured by square meters (or feet) or numbers of total volumes, but by its distinctive intelligence. Librera Marco Polo is positively overflowing with that.

It also puts on excellent events, such as the one for Sergio Garufi's dark and engaging novel of bibliophilia, Il nome giusto, pictured above and below.

And when you're in Venice, stop in and see it for yourself. 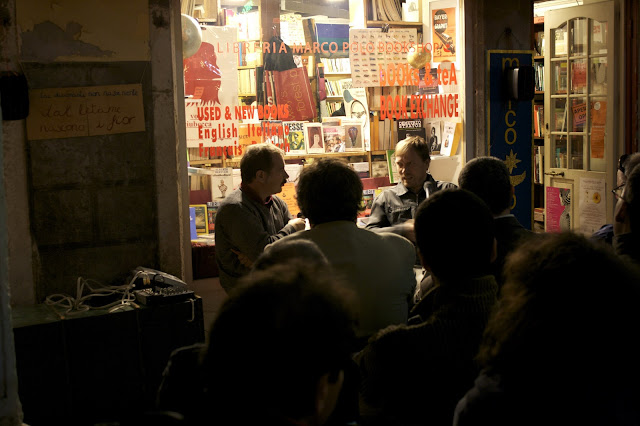