Dining Beside the Rialto at Campo Erberia

I often find myself falling into the assumption that any place in Venice so famous as to be a destination for even the most oblivious of day-tripping visitors to the city--Piazza San Marco, say, or the Rialto area--is steadfastly avoided by Venetians and residents, especially during the summer months. But this is not entirely true. Nor is it true that any Venetian with a boat will inevitably use it to flee the center of town and its tourist hordes.

There are exceptions to the above assumptions, as I first learned a little over a year ago when I boarded a friend's topa for an evening picnic and found that our destination lay not out in the lagoon but moored beside Campo Erberia (pictured above), on the Grand Canal hardly 200 meters from the Rialto Bridge. Reserved for the use of garbage boats during the day, it becomes something of a destination for residents' boats after the work day is over. In fact, it's such a pleasant place to eat in one's boat that not only did my family and I tie up there one Saturday evening in July, but no sooner had we left than our mooring spot was taken by a large topa full of friends seated in chairs around a fully outfitted dining table.

Before leaving for our trip to the US at the beginning of August we made another attempt to moor there only to find the few spots already occupied. So we continued on in the direction of the train station and tied up in front of a non-descript palazzo not far from where the Cannaregio Canal enters the Grand Canal. There was no competition for a space here, and the laughter directed our way by a passing water taxi driver suggested that our selection may have been a bit, well, eccentric, but it was a pleasant spot nonetheless. 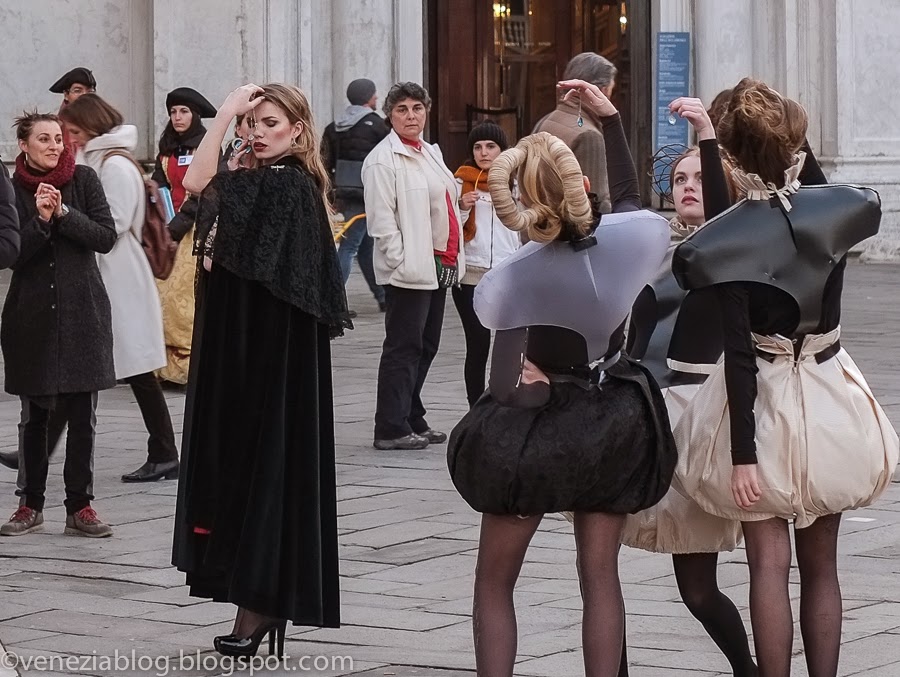 The job of these four models was to go all ga-ga over the crystal or gem or whatever the little commodity they're holding was, but when I took this picture and the one below last February 12, 2014 I was excited to find that after many years the pleasant campiello in front of the Accademia museum was finally completely clear of construction  material. By now the absence of the work site and the crane that long towered above it is no longer news, but I still appreciate the view every time I pass. Even without the models. 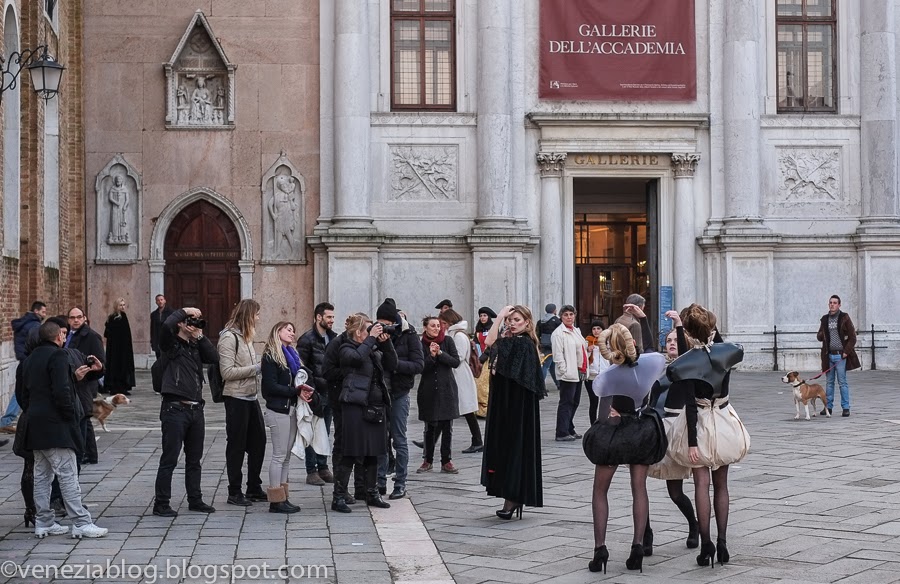 Posted by Steven Varni, aka Sig. Nonloso at 1:43 PM No comments: 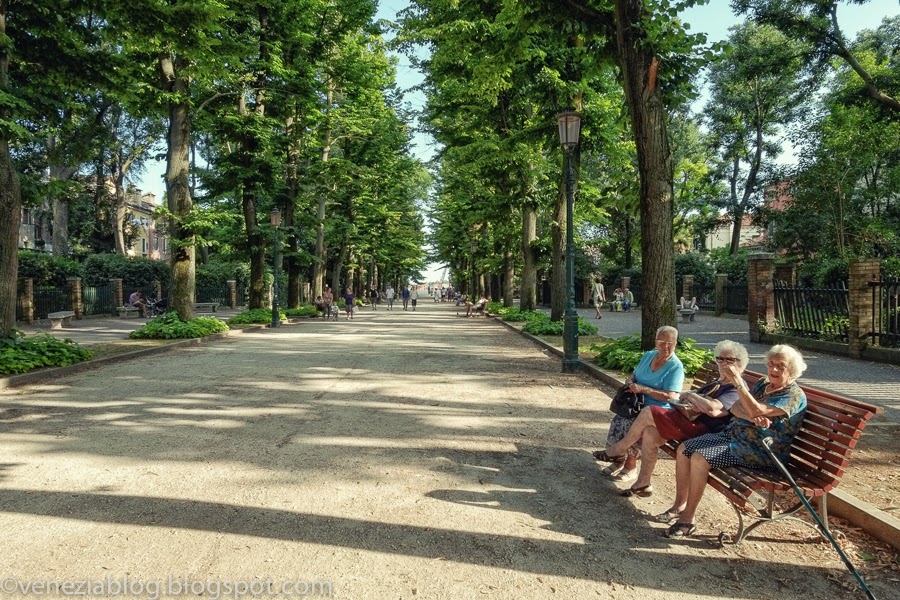 On even the hottest summer days one can usually find a corridor of breeze under the trees of Viale Garbaldi. Experiencing it with friends potentially makes it more refreshing.

Posted by Steven Varni, aka Sig. Nonloso at 9:24 PM No comments:

Colors of a Cantiere on a Summer Evening on Giudecca 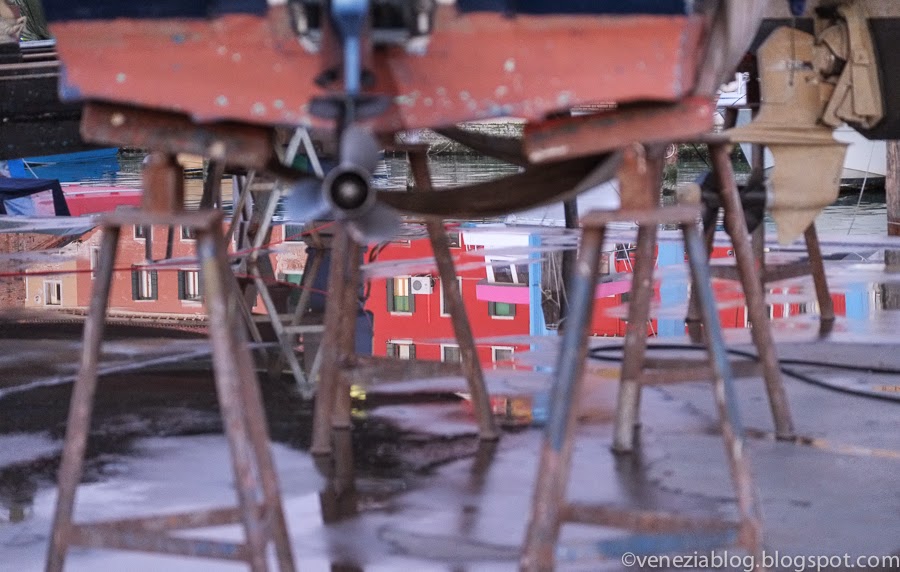 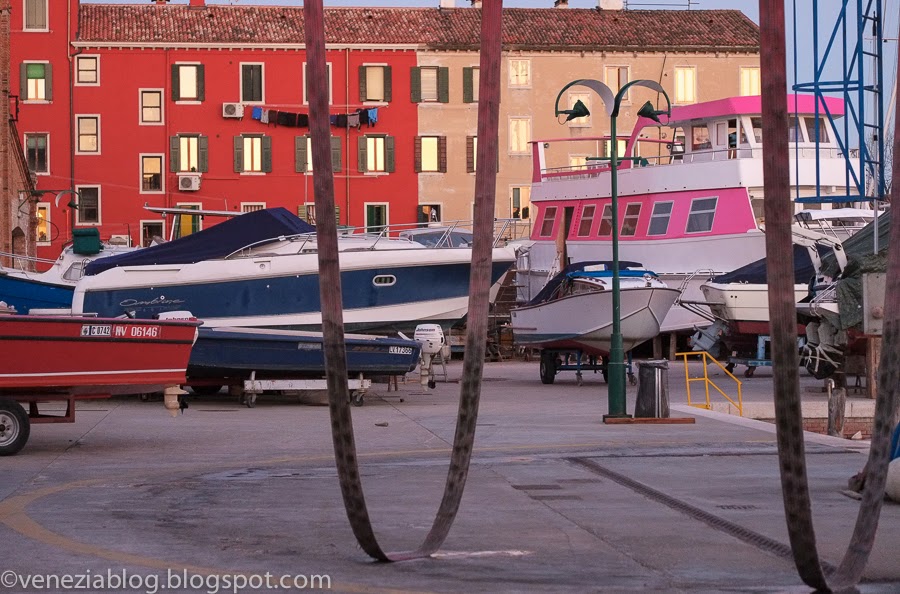 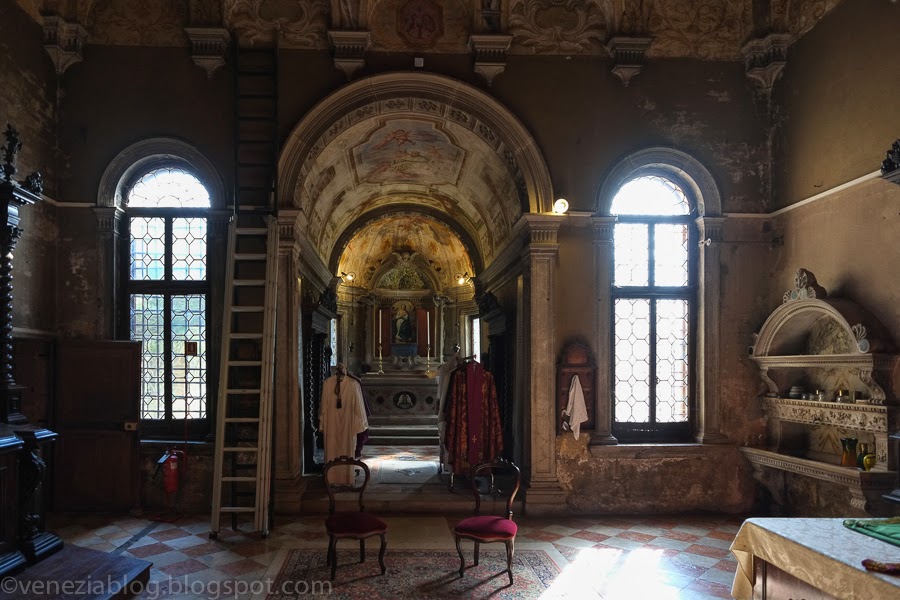 For more information on this church of San Michele in Isola I refer you to the website of the Churches of Venice and its interesting entry near the bottom of its page devoted to the various churches of the lagoon's smaller islands:

We're still on the road far from Venice and I'm afraid the captioning of these images is beyond me at the moment, but the link above provides a good overview. 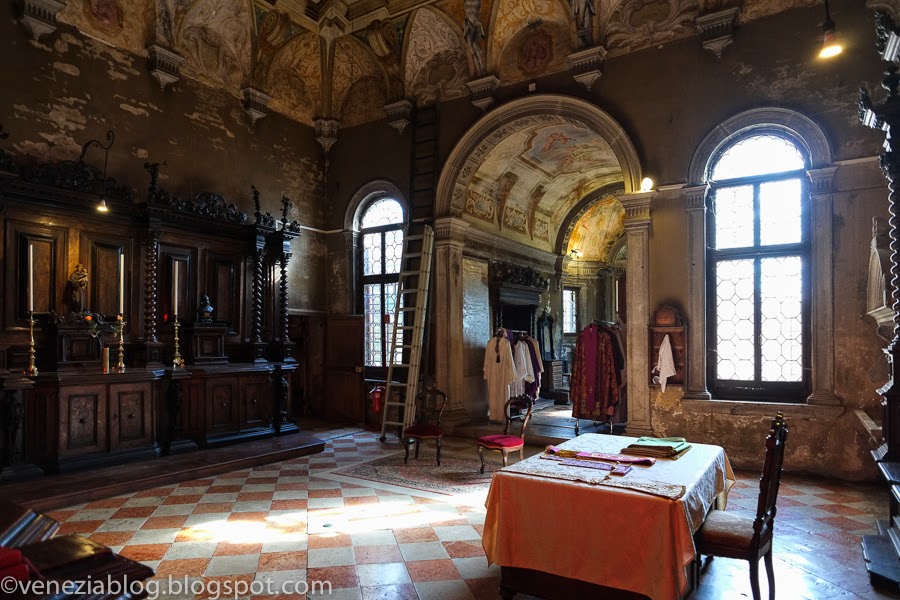 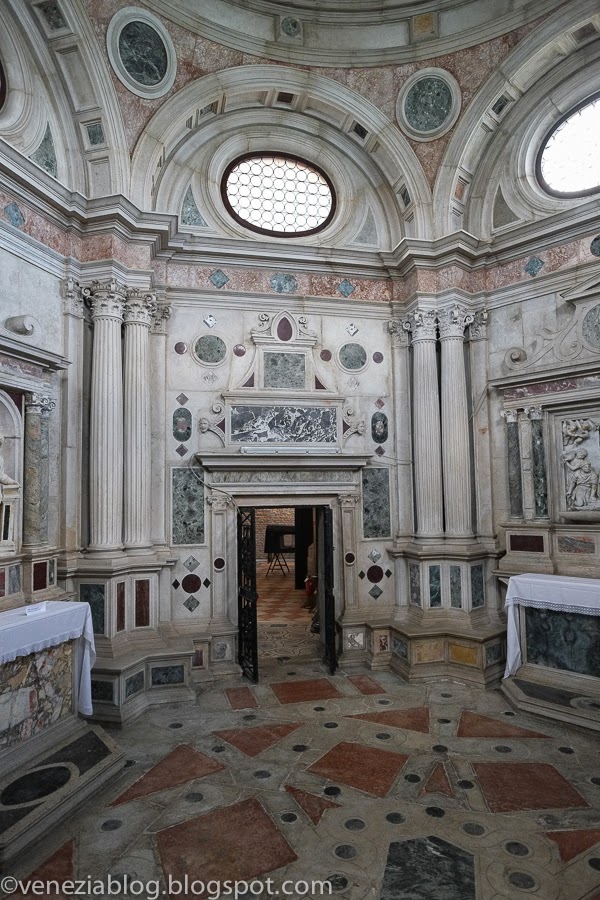 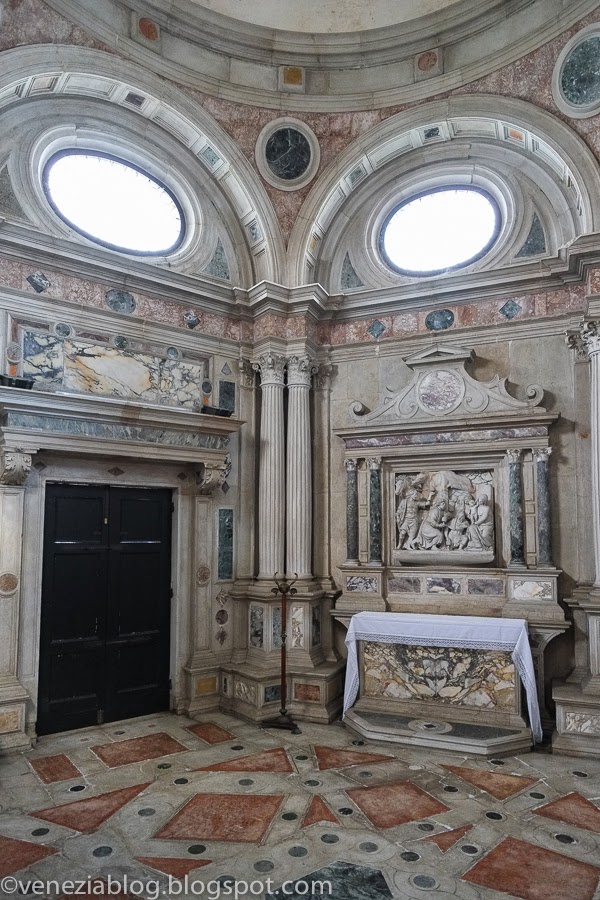 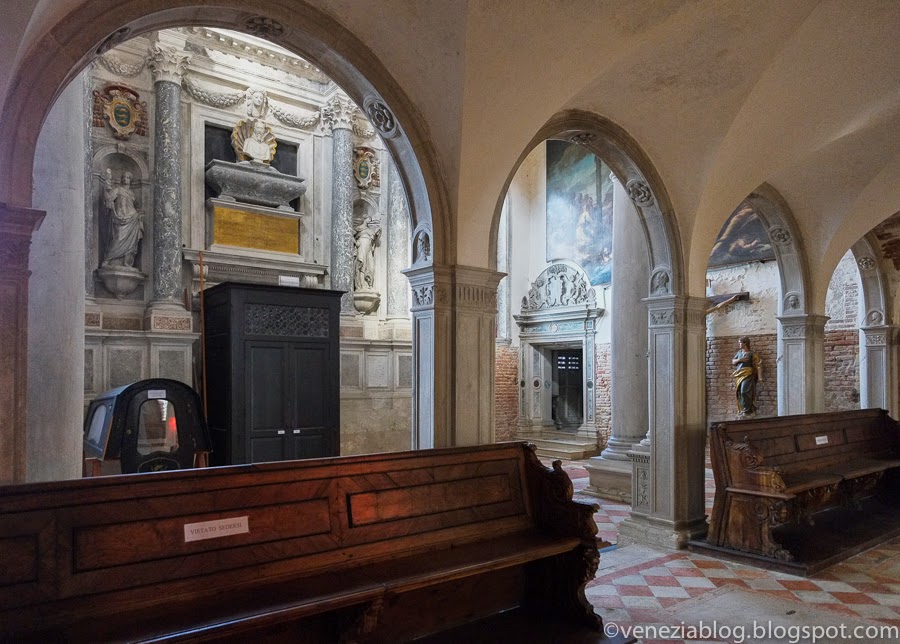 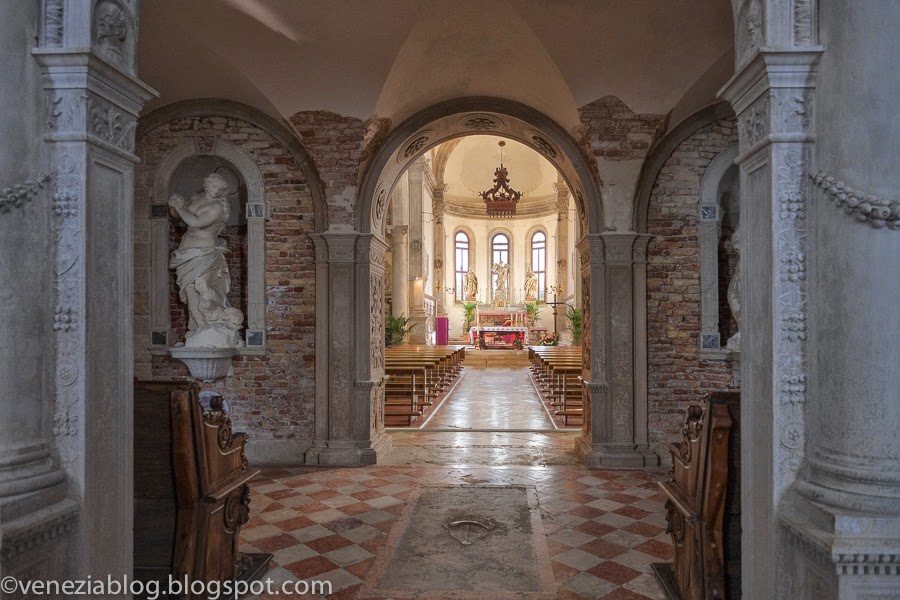 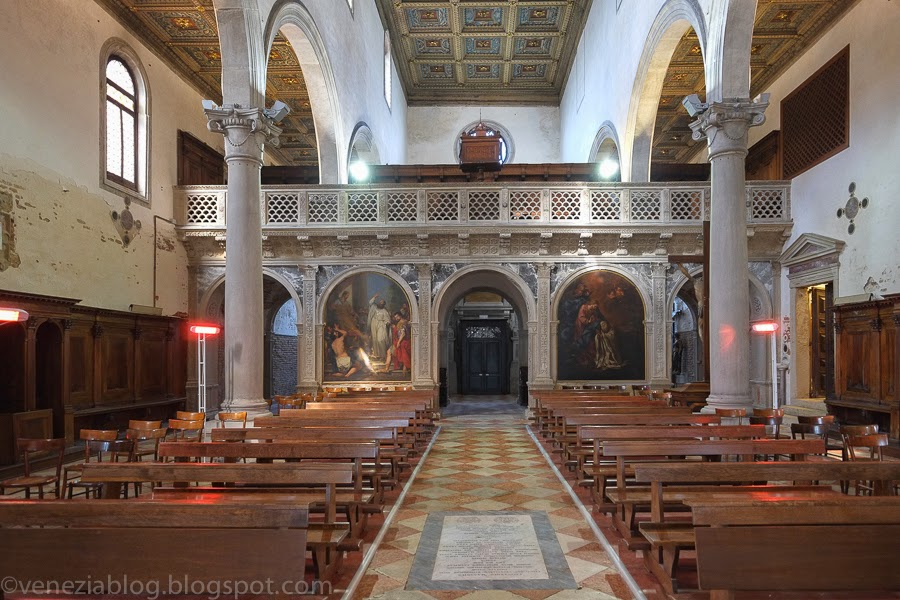 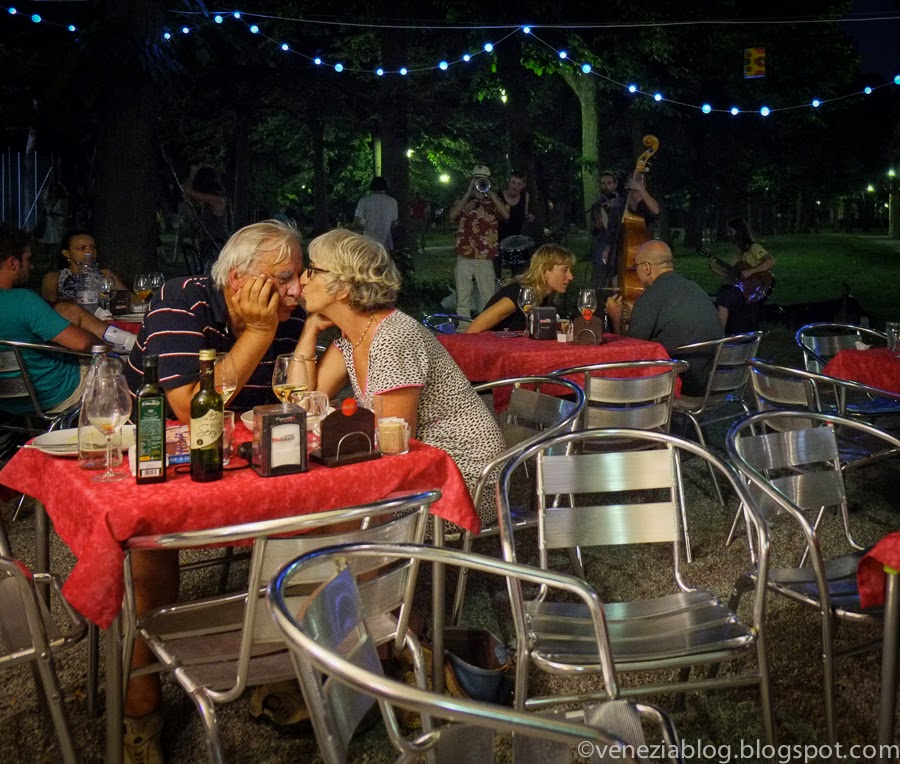 I originally posted the above image last summer as one of 7 photos of last July's Festa del Redentore celebration, but my fondness for the unknown couple in the foreground always made me wish I'd posted it by itself. So here it is as a post of its own, with a new black and white version below which seems to suggest a slightly different mood. 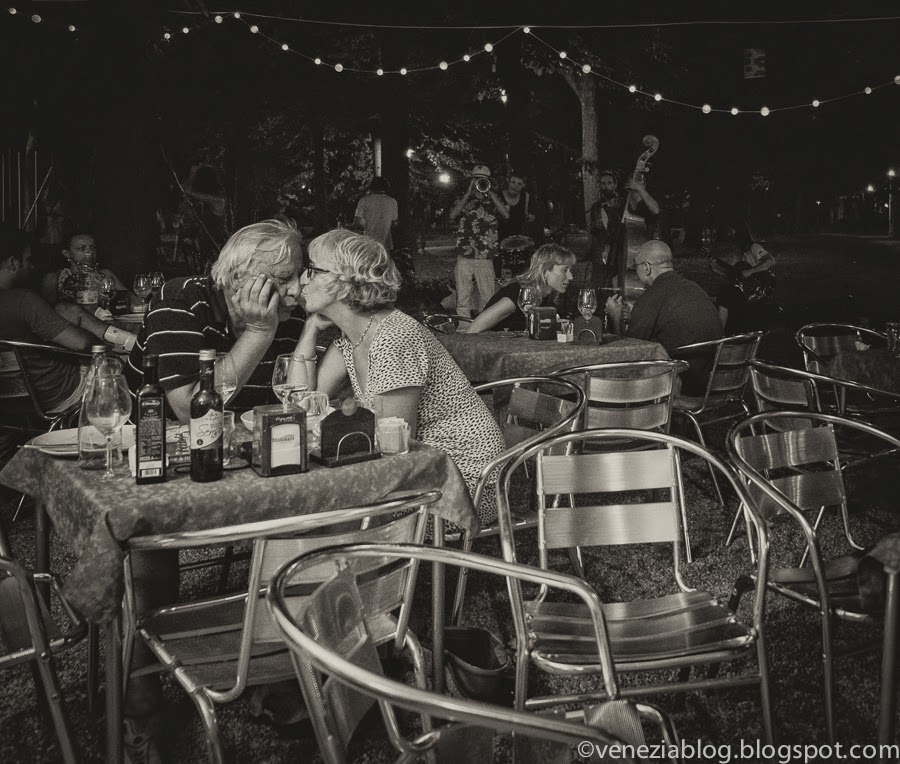 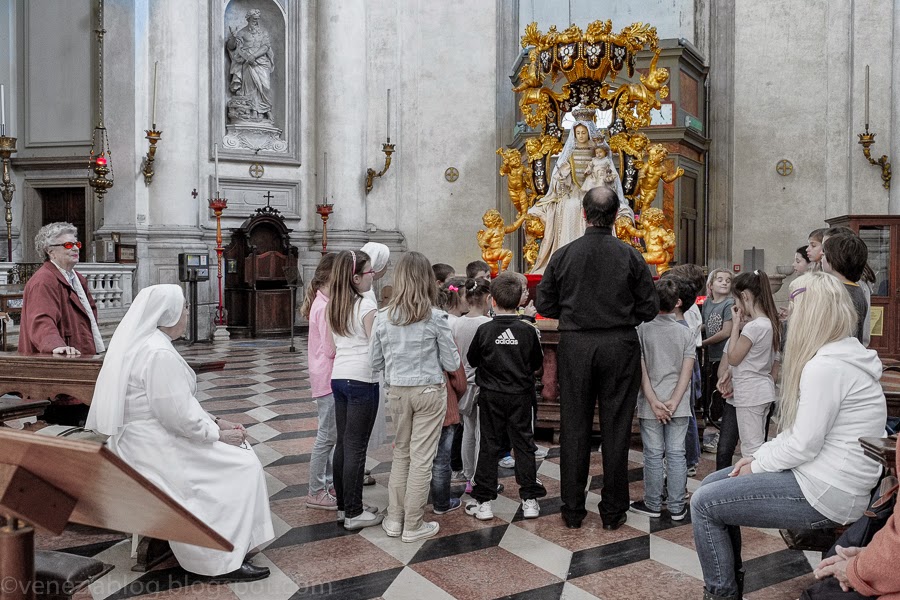 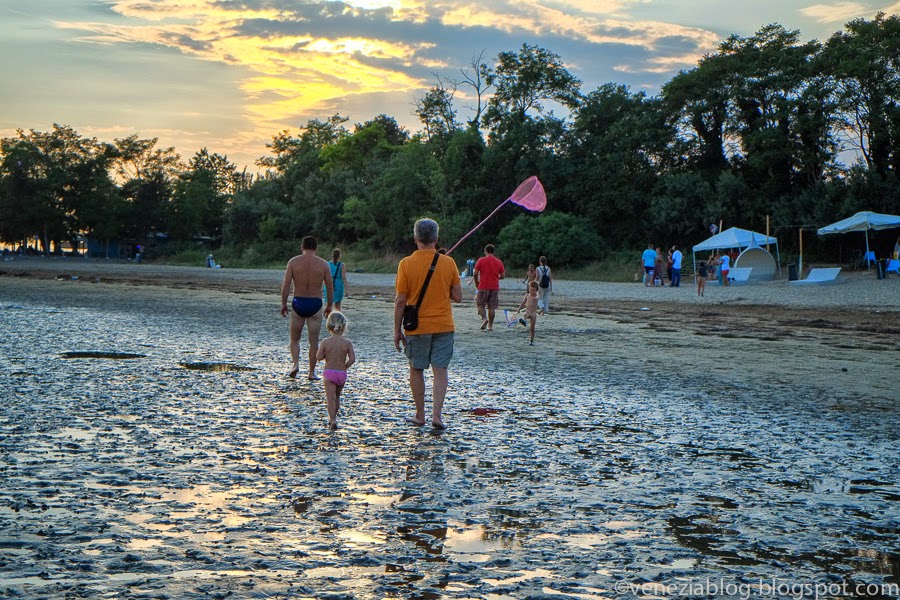 There are still places in the lagoon that few tourists ever visit, still experiences--like netting and releasing little crabs along the shallow shore--not on any tour itinerary.

Posted by Steven Varni, aka Sig. Nonloso at 9:08 AM No comments:

Heavenly Gelato and a Painting by Lorenzo Lotto 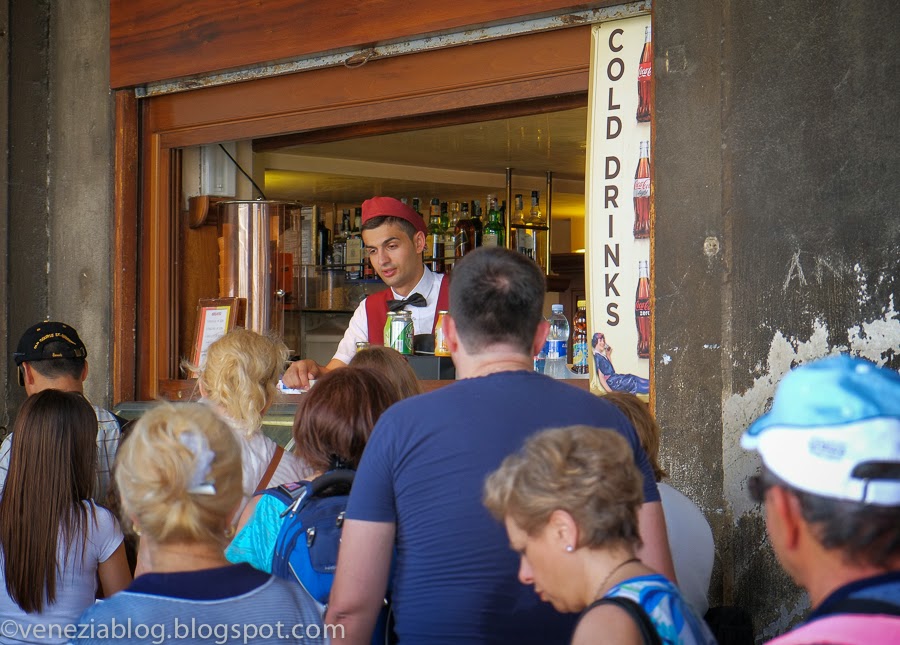 A city with so many great paintings sometimes exerts an influence on how you see the everyday world. I took the above photo last summer because it reminded me of a painting by Lorenzo Lotto in the church of Santi Giovanni e Paolo called "The Alms of Saint Anthony" (1542). I wasn't thinking of St Anthony himself, enthroned in the upper half of the painting in the company of angels, but--as you can see in the detail of the painting below--his two clerical helpers in the lower half of the canvas, ministering from behind a slightly elevated ledge to a crowd of supplicants.

I'd intended for it to be a post of its own, along with images of the Lotto painting, but I ended up including the image as one of "6 Views of Piazza San Marco" (6 Views) instead, without any reference to the work by Lotto.

Most photos that I post on this blog are taken two or three days before their appearance here, sometimes on the same day, but as we are going to be leaving Venice on Tuesday to spend a little more than three weeks in the US such timeliness won't be an option this month. Instead, I'll be posting images taken as long ago as last summer to as recently as just three days ago that were never posted because something else came along and took their place--or, in the case of this image and one other, became one image among many within a single post.

I hope you'll enjoy them.

Over the more than two centuries that Venice has survived on tourism any number of writers have encouraged visitors to notice how the faces of the saints (and sinners) in the city's great religious paintings from four or five hundred years ago are those of the living people they're still likely to see around them: fish mongers, merchants, gondolieri. This seems to have been an especially popular theme in the 19th century, but the same might still be said today.

Each era comes up with its own images of saintliness and service. And sometimes they may even involve gelato. 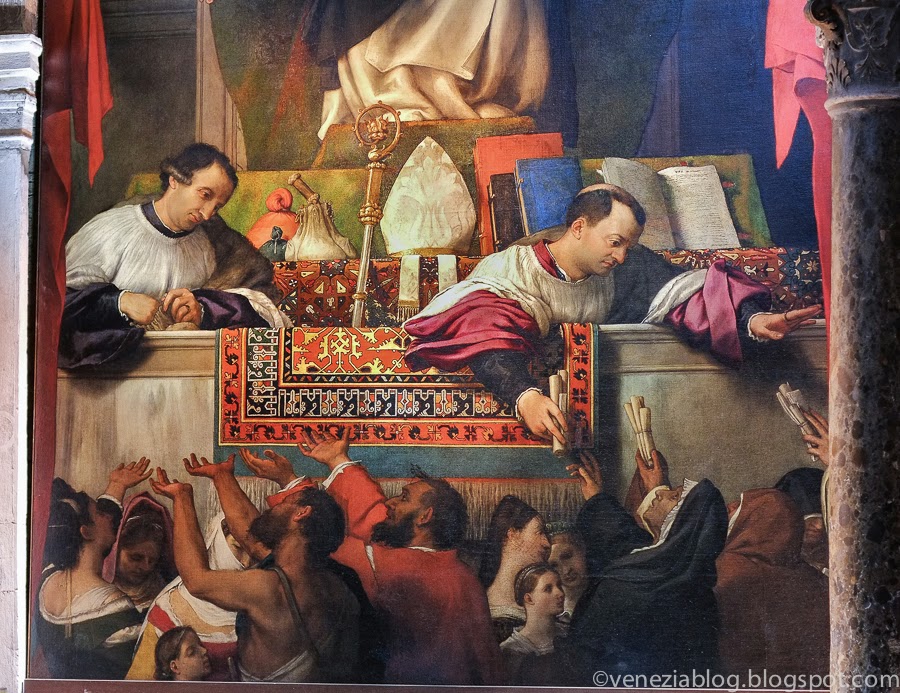 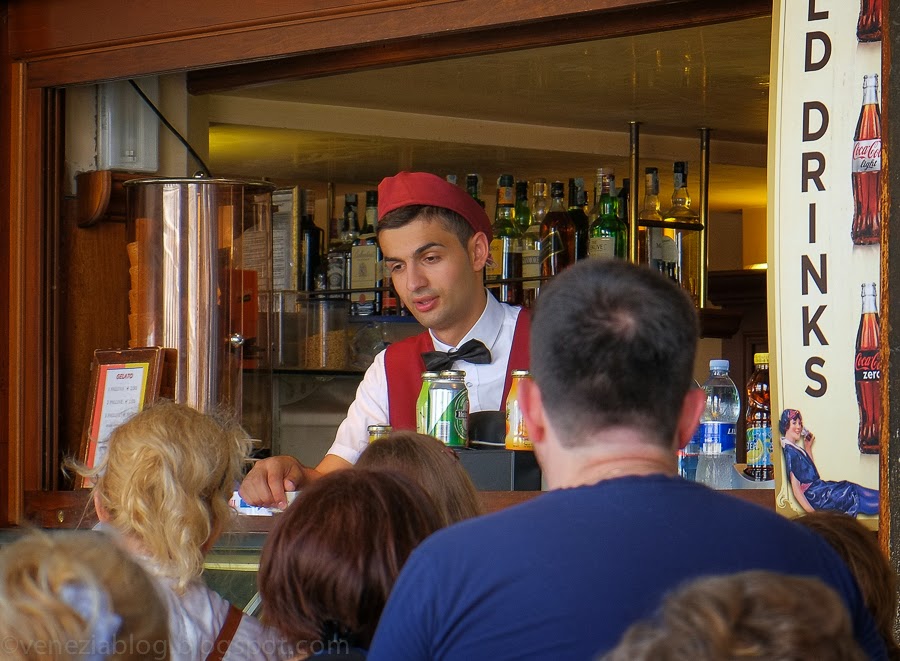 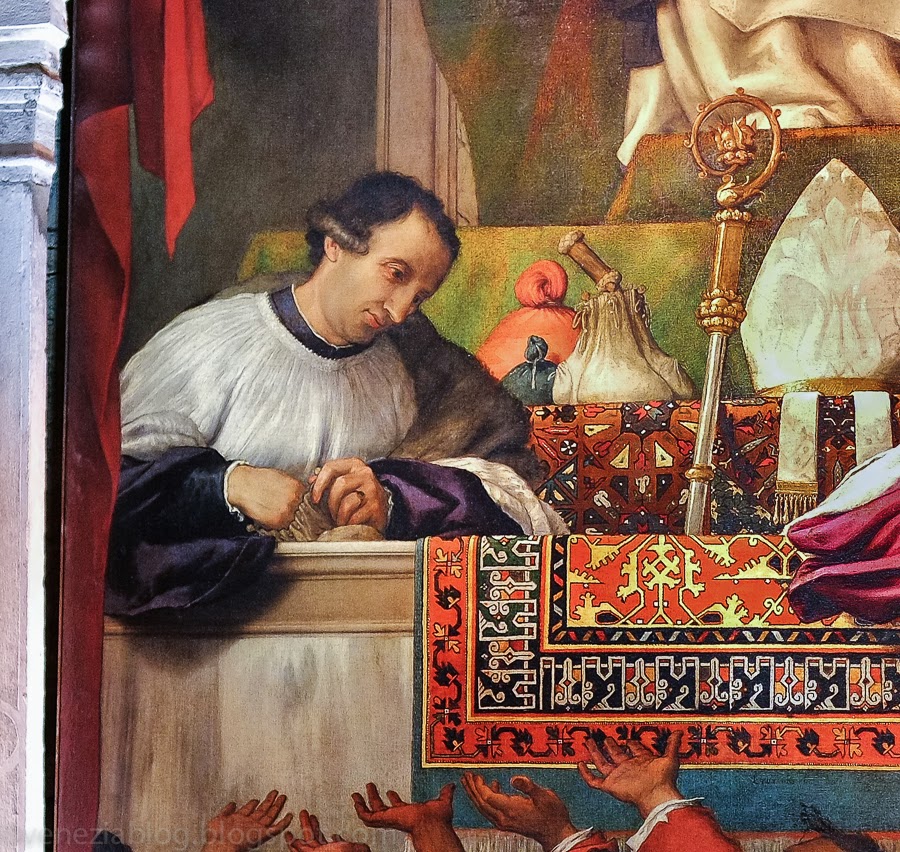 Sunset from Certosa, This Evening 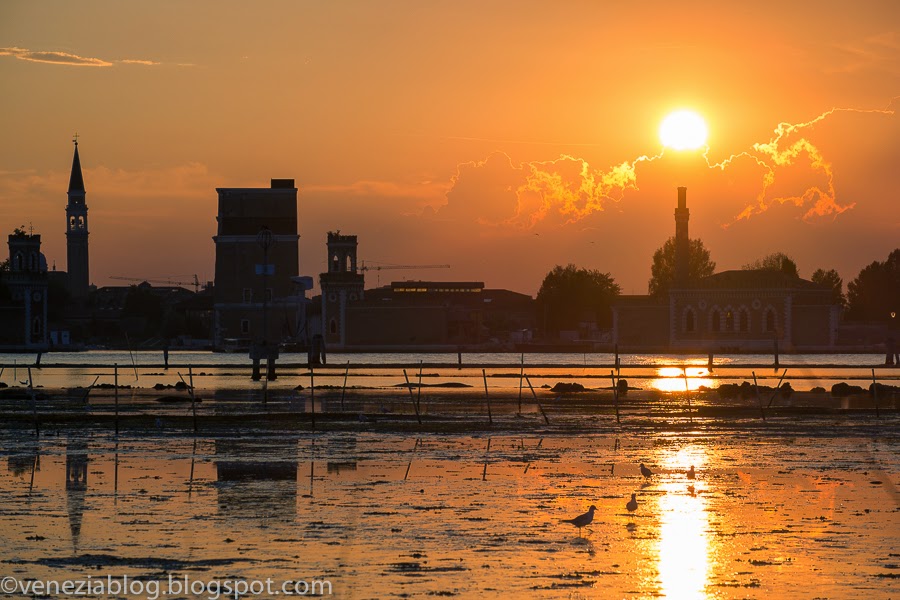