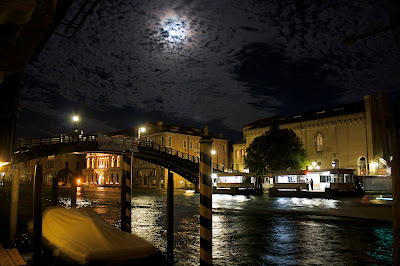 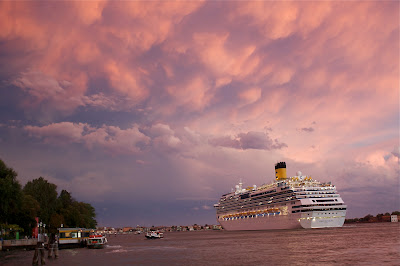 Posted by Steven Varni, aka Sig. Nonloso at 3:26 PM No comments:

Rowing on the Lagoon at Sunset: August in Venice

Venice in August may not be a particularly great place for visitors--crowds are large, many shops are closed--but in a few ways it's not so bad for residents. For one thing, because most other residents of Venice leave town in August, a resident who remains here finds him- or herself--without the hassle or expense of travel--on something of a vacation at home. Things quiet down in the residential neighborhoods. The playgrounds and even the beach are less packed. In fact, after enough people you know leave town you find yourself leading a life quite different than the one you lead the other 11 months of the year: less busy, less social, more relaxed. Your own home comes to seem rather like some isolated cabin in the mountains, your neighborhood like some strange sparsely inhabited village. Without your usual social circle around, you find yourself thrown back upon your own devices, engaged in new interests or intensifying old ones--just as if you'd ventured to some far-off locale.

Suddenly we've acquired a menagerie: two goldfish and four turtles, which we're baby-sitting while their owners are away.

And at this time my remiera, where some two or three or more members are usually coming or going in its boats throughout the year, feels almost like a private garage. When Sandro and I went to row last Friday evening the register showed that not a single other member had signed out a boat that day. And out on the lagoon one rarely sees another boat of vogatori (rowers). Even the agonisti or competitive rowers who engage in the regatte--those top-flight rowers who train every day through the bone-chill of winter--take a break.

Two and a half months of heat and virtually no rain have taken their toll: even the bumptious cicadas filling the trees of Sant' Elena--domineering as the sun through June and July--have subsided to a thin stream of desultory chatter, worn down.

Floating on the lagoon after dinner seems the perfect place to end such lethargic days. We try to get out on it at least three or four times a week.
Posted by Steven Varni, aka Sig. Nonloso at 8:09 AM No comments: 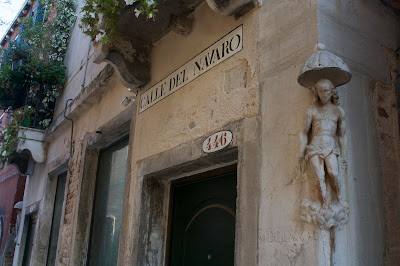 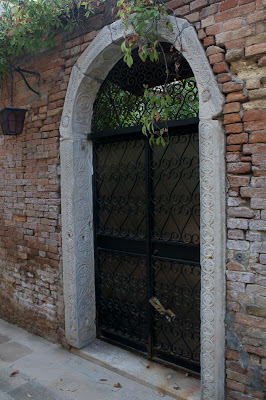 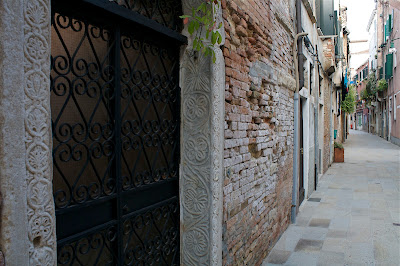 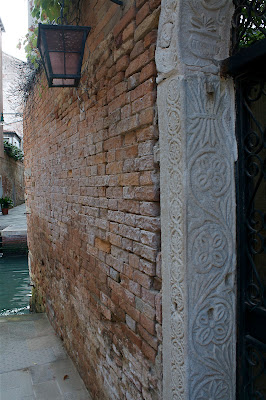 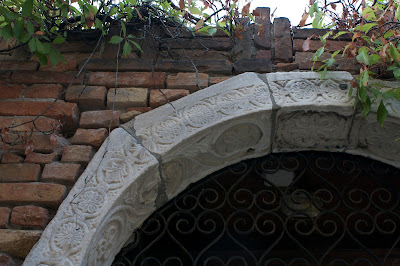 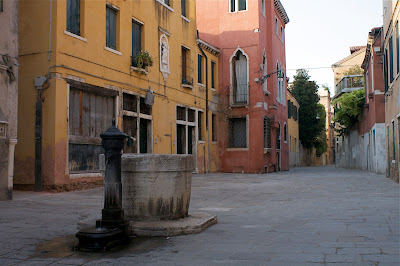 Just a short way from the heavily-trafficked Rio Terrà Foscarini route between the Zattere and L'Accademia, Piscina Sant' Agnese was completely quiet yesterday just before 7 pm: a nice retreat for anyone who, like me, is a sucker for reds and oranges in all their weather-worn appeal (to which I'm afraid these photos don't do justice). 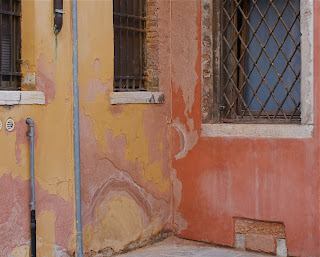 Campo Do Pozzi, This Evening, 9 pm 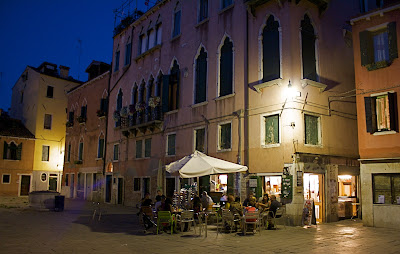 Of course there's actually only one well (pozzo) still to be found in this campo, not two, but the pleasant bar pictured above makes up for the missing one. It's a favorite place for members of my rowing club (or remiera) to relax and find refreshment after a particularly taxing uscita (or outing), and is generally much more of a local hangout than tourist place. Before Sunday afternoon games of the Venetian soccer team you'll sometimes find groups of fans in green, orange and black fortifying themselves for the action ahead. I snapped this picture on the way home from my own practice session at the remiera tonight--I'm trying to get the hang of vogata alla valesana (a solo form of rowing using two crossed oars)--and was reminded yet again how very much I need a tripod: leaning the camera against the corner of a building and trying to hold it still for a slow shutter speed has some serious limitations.
Posted by Steven Varni, aka Sig. Nonloso at 4:09 PM 13 comments: 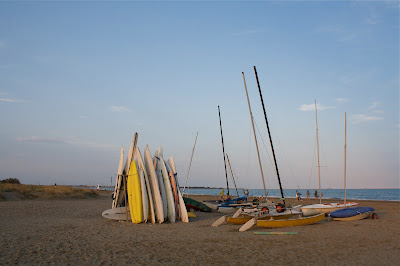 One of the nice things about living in Venice is that when you go out shopping here at the smaller food shops--rather than Coop or Billa-style supermarkets--you come home with much more than groceries.

Recently Jen returned from a visit to a certain macelleria on Via Garibaldi to tell me that we lived on an island of Fascists.

Now both of us already knew that, yes, the bulk of what is now Sant' Elena was built up of mud dredged up in the process of creating deep shipping lanes through the lagoon in the early part of the 20th Century and that the construction upon it was the handiwork of the Fascists. Prior to this, except for the island upon which the 12th-century church and monastery of Sant' Elena stood, the rest of what is now the island was merely a barrena, frequently submerged by tides. 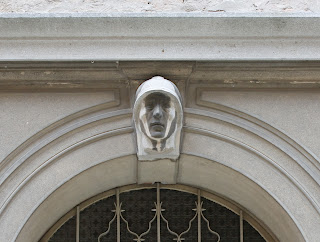 But this is not what the butcher meant. No, he said, he'd lived on Sant' Elena for one year but had to leave because it was far too conservative for his taste.

Well, Jen said, it's traditionally been un quartiere popolare (working class neighborhood) and sometimes those can be conservative...

No, not just conservative, he insisted, but quite literally unabashedly Fascist. He claimed that the families who originally moved into the newly-built Fascist neighborhood in the 1920s were party loyalists, and many have remained so.

He said that in the uppermost stories of certain Sant' Elena apartments there were still to be found busts of Mussolini, which were of more than merely historical interest to their owners. He'd seen them himself.

He couldn't wait to escape from Sant' Elena. After one year here he'd fled to the nearby--but not too nearby--island of San Pietro di Castello. Where he has lived happily ever since.

In our year and half here we've yet to encounter any busts of Mussolini. The life-long Sant' Elena resident we know best is actually quite liberal, and having been to the low-ceilinged uppermost floor of his apartment I can tell you that the only portrait to be found there is a lovely oil of his childhood self painted in the late 1940s, with no trace of Fascism in it. 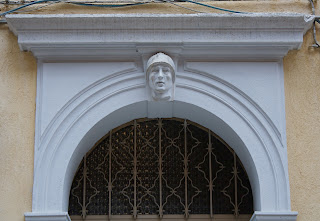 That's not to say that there aren't visual reminders of the party that built Sant' Elena that you can't see for yourself--and without going to the trouble of finagling your way into some resident's attic. On two sides of a certain large apartment building about a block from Sant' Elena's only hotel (which was once a convent), you can see four soldier heads above four different doors (two overlooking Calle del Carnaro, two overlooking Calle Zugna) in the particular style that Mussolini favored: concrete reminders of the expansionist dreams of military glory that were one of the foundations of the Fascist state. They adorn the doorways of an apartment complex once exclusively designated for Italian veterans of World War I. You'd think that survivors of that nightmarish war could have done without daily reminders of their service but, well, Fascism never tired of selling heroic sacrifice.

As for contemporary flesh-and-blood Fascists, I've yet to meet any in Sant' Elena. Nor even any supporters of Lega Nord. But I'll keep my eyes open, as these days no matter what part of Venice, or Italy, or the world you live in there are some very dangerous political groups trying to gain traction. 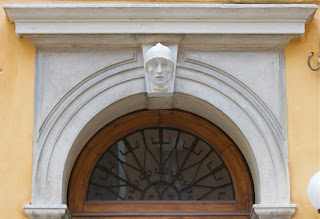 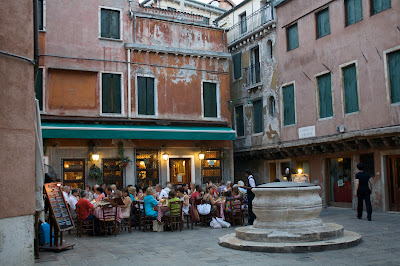