Welcome, More or Less, to Venice 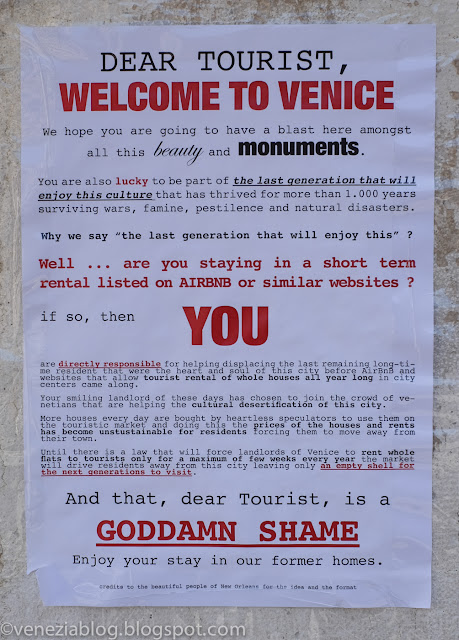 If you're renting an apartment in Venice for a few days (or longer) and happen upon one of the above posters that began showing up around the city a couple of weeks ago you might have good cause to be surprised. After all, you might ask (or at least think), "Aren't I one of the good tourists?!"

"Unlike 75% of the more than 20 million visitors who invade the city each year," you might say, "I'm not here for just a few hours, requiring much more in city expenditures (in terms of garbage collection, policing, etc) than I spend. I'm here for a span of days, buying food, perhaps going to restaurants, paying to go to cultural sites, putting money into the local economy. I'm one of the good guys!"

And you'd be right, for you are the type of tourist that Venice needs and should appreciate. But...

But nothing is simple in Venice, and that "but" which includes you also includes a lot of other people who are not only more culpable, but, even worse, knowingly and intentionally culpable.

Here's a quick bit of background, courtesy of last Wednesday's Il Gazzettino. In 1999 there were 12,000 beds available in the hotels of Venice. By last year that number had increased 50% to 18,000.

Now this great increase was not due only to the rise of the internet and sites such as AirBnB, but, initially to a change in the laws which allowed people to start legally turning private homes into B&Bs. For in a city in which jobs were (and are) hard to come by, and where families tend to hold onto property, this change opened up an income source for residents who, upon the death of an elderly relative, for example, could convert that apartment that had once housed a local into tourist lodging--and thereby get a better rate of return than if they had rented it long-term to a city resident.

I know people who rent out part of their own home in this way as a source of income.

In some ways this change in law, one could argue, gave well-established Venetians who might otherwise have had to leave the city for lack of work new career opportunities: they could become tourist hosts.

But, unlike the family we know which rents out part of their own lodgings, not every Venetian who decided to do this did so legally: doing all the paperwork required (needless to say, it's a lot) and reporting their earnings and paying taxes. And as the growth of the internet made renting out tourist flats easier, the number of landlords doing so illegally only increased.

So, if the official figure of "ex-alberghi letti" aimed exclusively at tourist traffic is placed at 20,000, the actual number could very be well twice that.

In last Monday's Gazzettino the head of the Guardia di Finanzia promised more tax audits to address this problem, and announced a renewed commitment to collecting funds owed to the city. One might be excused for asking, "What took you so long?"

(An account of some of their recent successes in uncovering dozens of illegal B&Bs right around Piazza San Marco is here: http://www.ansa.it/veneto/notizie/2016/05/18/scoperti-decine-di-bb-abusivi-a-venezia ).

But aside from unreported income and illegal lodgings, the law that allowed landlords to legally change their properties from residences to tourist lodgings has had a profound effect on the housing market. Speculators who would not have bothered buying up properties to rent to Venetians residents at less-than-inspiring rates were excited by the much higher returns promised by tourist-only flats. So that it was not merely a matter of a local family renting out their late grandma's old place for income, but of "entrepreneurs" (local and otherwise) buying up vast quantities of apartments that once would have been rented to residents and orienting them exclusively to tourists.

Not surprisingly in such a context--especially when added to the already-existing market for little-used second or vacation homes--the price of apartments has steadily gone up.

(Of course this kind of situation is not, unfortunately, limited to Venice. A line in small print at the bottom of the poster above acknowledges that its form and content is derived from one created in New Orleans, Louisiana--which explains the distinctly un-Venetian-sounding phrase "damn shame" that appears in it. And a recent live discussion on the Guardian UK website on the question "Should the government ban second home ownership?" [http://www.theguardian.com//2016/may/25/should-the-government-ban] considers the matter in British and northern European contexts.)

Additionally, as the price of Venetian apartments for sale has moved beyond the reach of most Venetians, the number of apartments for rent to residents has dwindled. You see, apartments here are designated either as transitorio (only to be rented to non-residents for no longer than a year) or for residents (usually in a contract of 4 years). As I've discovered first-hand, not only are the pickings quite slim for residents looking for an apartment, and quite pricey, but generally only the worst apartments are designated for residents. (see: http://veneziablog.blogspot.it/2015/03/renting-apartment-in-venice-part-1.html)

So that distinctly Venetian apartment you may find yourself day-dreaming about renting--with the view of the little canal and all the charming touches--will most likely be available to you (no matter how much you might be willing to spend) only if you are not Venetian and don't have Venetian residency and don't plan on really making a life here.

As is the case with too much about the city, the housing market, too, is oriented toward idle, barren and unsustainable fantasy, profitable to a few, rather than to actual, generative living.

To loosely paraphrase George Carlin about another place, the "Dream of Venice" is too often predicated upon being fast asleep, with eyes shut tight.

Now, if those who control Venice actually cared about preserving what little actual life remains in it, they might do things such as create tax incentives that would reward landlords for renting to residents rather than tourists, and change any tendency in the current regulations on renting to residents that make landlords fear that they will never be able to rid themselves of even non-paying resident tenants.

And they might also immediately place a moratorium on all transformations of residential apartments into tourist ones (called "i cambi d'uso" in Italian).

This is exactly what is called for in a petition which you--yes, you Dear Reader--can sign, whether you are a resident or not: https://gruppo25aprile.org/2016/05/20/to-our-foreign-friends-would-you-please-sign-this-petition/

And if you are planning to rent an apartment in Venice--which really does put you among the best visitors to Venice (which also includes people who stay in hotels)--you might ask your potential landlord if the apartment you're interested in is "un'affitacamera regolare" (a legal rental rather than a black market one). Then you'll not only be doing your part to contribute to the continuing existence of the city, but you'll know that your landlord is doing his or hers, too.

Posted by Steven Varni, aka Sig. Nonloso at 5:59 PM