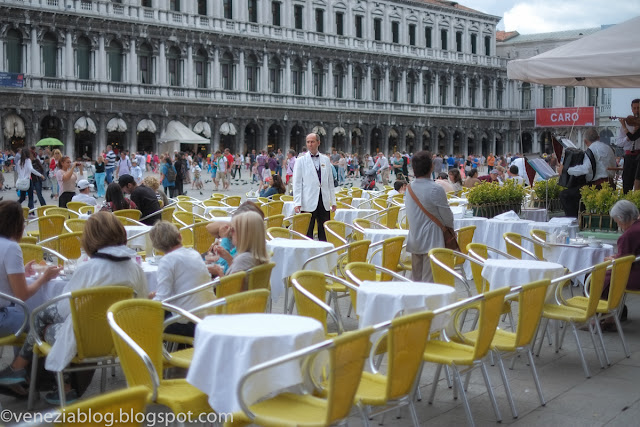 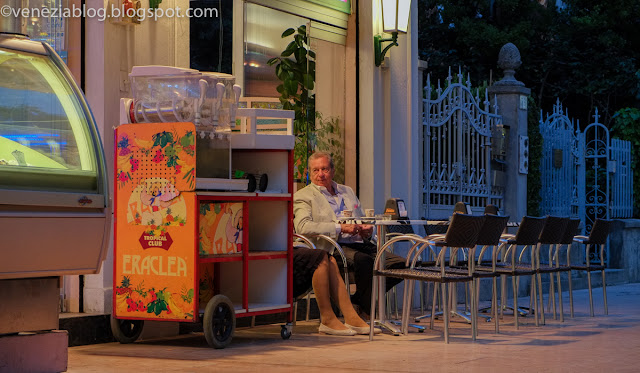 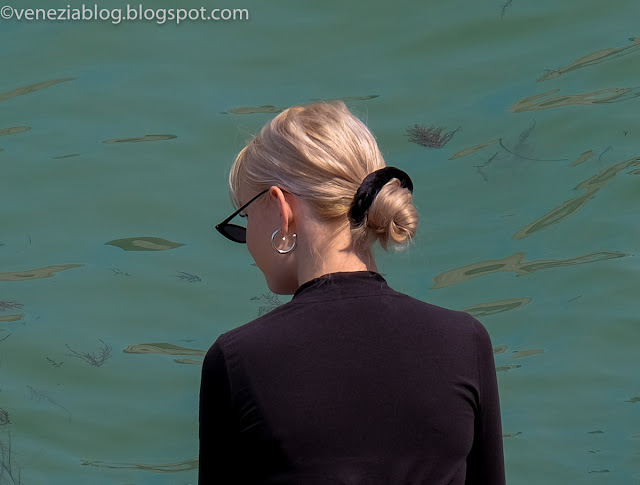 The palaces lining either side of the Grand Canal famously make for a beautiful backdrop, but on some days just the particular (and always changing) shade of the water itself will do. 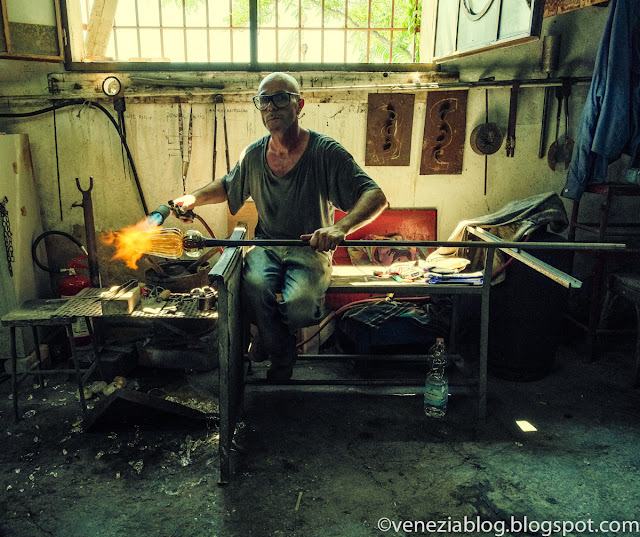 And you think it's hot where you are this summer!

The artisan in the image above is one of Maestro Giorgio Giuman's three sons at Fornace Linea Arianna on Murano, and his work station is just a short distance from the factory's main glass oven, which burns at a temperature of 1,147℃ (or 2,967℉). To keep hydrated in such conditions he and his brothers each drink 6 liters of water (just over 1.5 gallons) per workday.

A slightly different version of this image was originally posted in late July of 2013, in connection with a post on the artist Judy Harvest's collaboration with Fornace Linea Arianna on her work Denatured.

Posted by Steven Varni, aka Sig. Nonloso at 9:35 AM No comments:

Far From the Madding Crowd (of Lido): Beach Volleyball in the North Lagoon 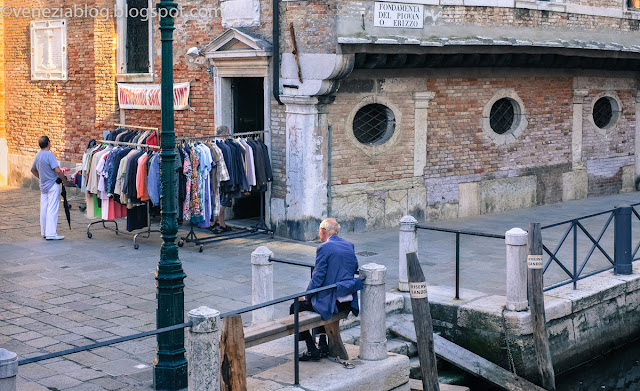 Posted by Steven Varni, aka Sig. Nonloso at 9:22 AM No comments:

Summer Is Here, Ready or Not 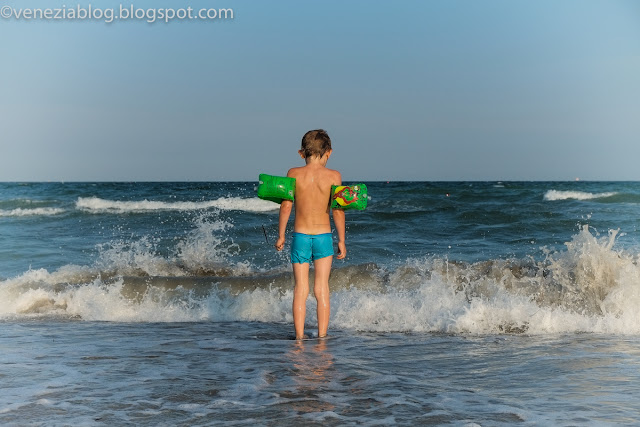 In a couple of days we'll be leaving Venice to travel for about a month. While we're gone I'll generally be posting images of Venice I took during Junes past: for example, the one above was taken on Lido almost exactly five years ago but never posted.

In a couple of instances they may be images I posted more than four years ago, but which I've newly reprocessed and edited.

Any new images will be identified as such in the post.

Venice is a beautiful place to live; it's even more beautiful when one returns to it after being away for a while.


Though my high opinion of Pro Photo Italia and its proprietor Marco Missiaja hasn't changed in the four years since I first wrote of them on this blog, a number of other things about the store have--not least of all, its location.

Originally divided between two small storefronts near either end of Calle dei Fuseri, the store has recently fused into a single larger shop located on the same calle about midway between the old split locations.

The new shop not only has more space to display photographic equipment and photos, but in which to hold photography workshops.

To see images of the new location, and to read my (updated) post about what keeps me coming back to the shop, click on this link: http://veneziablog.blogspot.com/2014/02/the-best-photography-shop-in-venice.html

To check out the Pro Photo Italia website and online store (and to find out the address of its second brick-and-mortar store in Rome--which is run by Marco's brother), click here: https://prophotoitalia.webnode.it/ 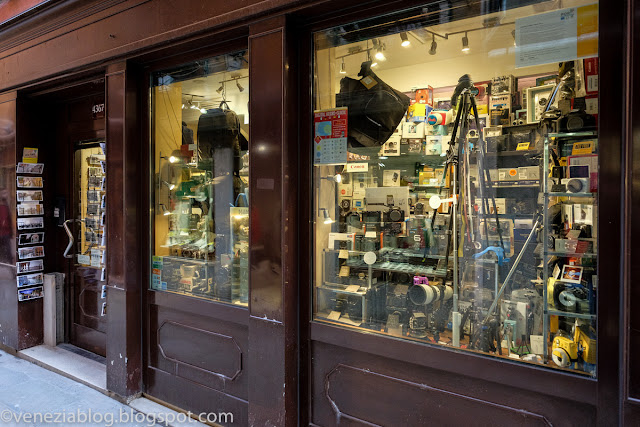 Posted by Steven Varni, aka Sig. Nonloso at 7:52 AM No comments:

All In The Family at the Querini Stampalia


Until 1 July you can still catch the Querini Stamplia's beautifully designed presentation of Andrea Mantegna's and Giovanni Bellini's parallel depictions of The Presentation of Jesus at the Temple. Mantegna and Bellini were brother-in-laws, and the wife of the former and sister of the latter is presented just to the left of Mary in both paintings. There are competing conjectures about the other peripheral figures in each painting as being some combination of family portraits and self-portraiture. Bellini painted his version about five years after Mantegna's (which is dated 1455).

In October the two paintings will be part of the major Mantegna/Giovanni Bellini exhibition that opens in London, before moving to Berlin in March 2019 (which is where Mantegna's Presentation can usually be found).

But there's something to be said for seeing these two paintings as they are presented here in Venice, apart from other works, as there's a great deal to take in, and a great deal that can't help but be missed when they become a pair of masterworks among many other masterworks.

Of course you couldn't ask for a more dramatic scene, though it's not one I'd ever given much thought to before, not least of all because the word "presentation" in the title can be misleading. Neither painter depicts Mary as presenting the infant Jesus in the way we commonly use that word today, with its suggestion of a certain open-handedness.

On the contrary, Mary, her hands bent at the wrists around the infant, clutches the infant close to her, even as the figure of Simeon (simply described as "righteous and devout" in the passage in the gospel of Luke from which this scene is taken, but by the time of Mantegna and Bellini often conceived of as a Temple priest) reaches out for the child.


In an informative and well-presented antechamber to the two paintings themselves, the curators of the exhibit point out that although it was common for children to be swaddled in the 15th century, in the belief that doing so prevented bone deformation (a practice, they note, which continued into the 20th century despite arguments as early as the 17th century that it was harmful), the wrapping of the infant Jesus in these depictions also foreshadows the winding sheets in which both artists (and countless others in the Christian tradition) will depict the dead adult Jesus after his crucifixion.

In Luke 2:34-35, the holy figure of Simeon "prophesied to Mary: 'Behold, this child is set for the fall and rising of many in Israel, and for a sign that is spoken against (and a sword will pierce through your soul also), that thoughts out of many hearts may be revealed.'" 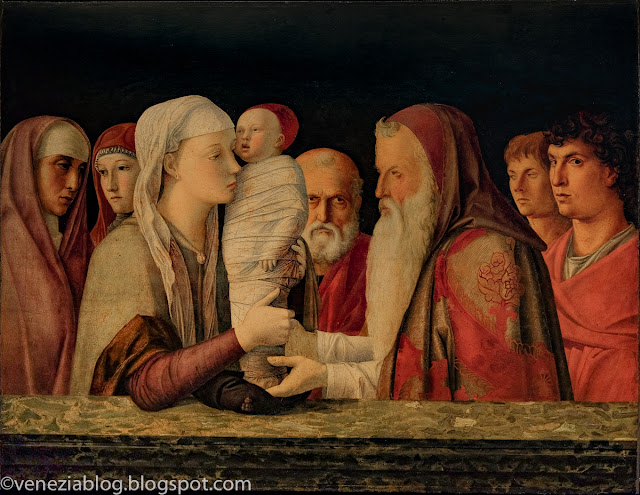 I take it, in other words, that once again the figure of Mary is called upon to do some heavy lifting for the Church as a representative of, and role model for, we mere mortals who look upon these paintings. Heaven knows (one might say) that the figure of Jesus will have no end of suffering to go through, suffering that will test the limits of his human endurance. But of course Jesus, to Christians, is not merely human.

Mary is only human, though, and like ancient figures before her (Agamemnon and Iphigenia come to mind, Abraham and Isaac), she's being asked to hand over her child to be sacrificed in the interest of a greater good. Agamemnon and Abraham both go along with this request with what can strike one as a dismaying alacrity, a canine obedience. But Mary, even as she submits to this higher calling, suffers visibly, humanly, and in doing so represents what have sometimes and in some places (not in Trump's America, not in Lega Nord's Italy) been valued as the most profound of human capacities (regardless of one's religion or lack of it): love, compassion, mercy, humility, and the fortitude to bear those "swords through the soul" from which no human can escape: all that frailty, pain, and loss we can only avoid feeling not by becoming gods but by becoming inhuman.

On a more earthly level, while looking at these two paintings I found myself wondering if the fact that Mantegna outfits his Holy Family in clothing in keeping with what was expected of patricians and nobility had anything to do with this painting being particularly aimed at that class of viewers, from whom both the Church and the State were certain to demand certain sacrifices (as Venetian depictions of Mary in her enclosed garden are said to have been intended to remind patricians not to marry outside of their class). But I'm no art historian, so who knows?

In any case, if you can't see these two paintings here in Venice perhaps you'll be lucky enough to see them in London or Berlin as part of those larger exhibitions. But if you're really lucky, you'll see them both here and there.

Posted by Steven Varni, aka Sig. Nonloso at 7:03 AM No comments:

Sunday in the Park with Tong, Today 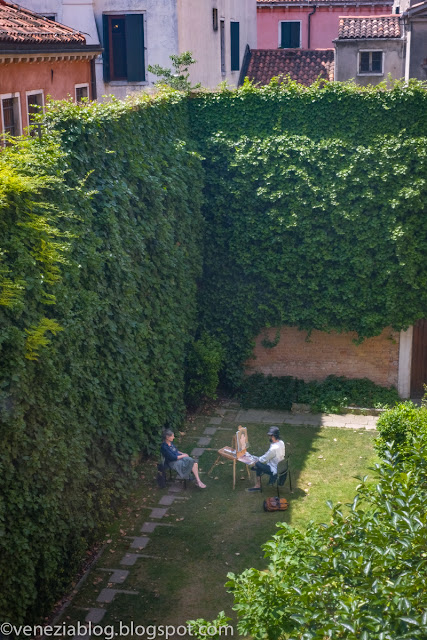 Actually, it's within the walled garden of the Querini Stampalia Museum where the Chinese artist Tong Yanrunan is painting an open air portrait. An exhibition of Yanrunan's portraits entitled Face to Face serves as the compelling centerpiece of a broader exhibition of contemporary Chinese art (Splendors of the Sun and Moon) which is running at the Querini until 20 July. Today was the last day that the artist was scheduled to be there painting portraits (something, alas, that I only found out about today), but the portraits themselves, built up from thick graceful brushstrokes, are definitely worth a look whether the artist is around or not.

Of course the Querini Stampalia is always worth a look (though I think it's still the rare tourist who actually makes his or her way there, though it's located just a short distance from Piazza San Marco). And until 1 July you can still catch the fine exhibition of two twinned paintings by Giovanni Bellini and his brother-in-law Andrea Mantegna--an image or two of which I'll put into the next post.


Posted by Steven Varni, aka Sig. Nonloso at 2:52 PM No comments: