Number 1 on the Grand Canal: You are There 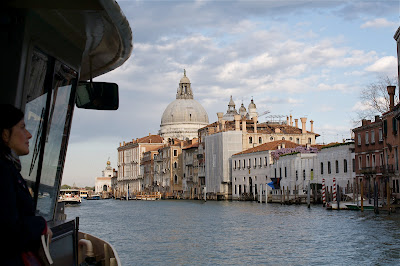 Or at least you are at least as much there--if not more--than I am right now; as I'm currently in Siracusa. A beautiful city is Siracusa, but as this is a Venice blog I can now share the sensation of missing La Serenissima along with absent others. By the time I return in a little less than a week the wisteria (festoning the terazzo of the Wake Forest University palazzo beside the Guggenheim above) will be blown...
Posted by Steven Varni, aka Sig. Nonloso at 2:37 PM 4 comments: 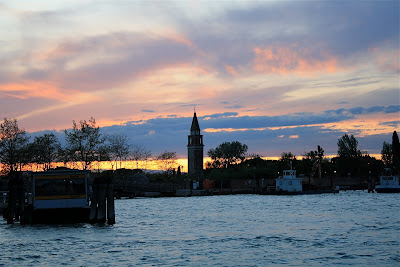 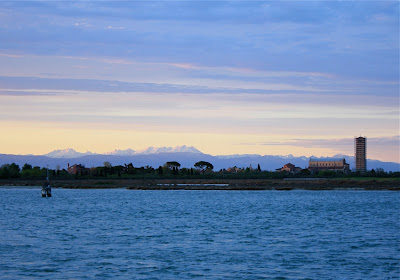 Via Baldassarre Galuppi, Burano, This Evening 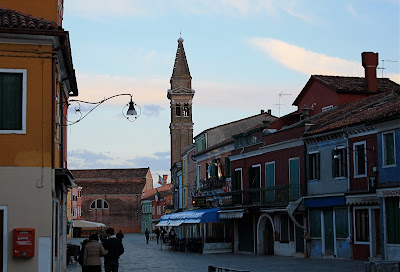 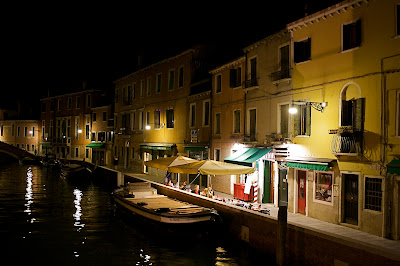 Shakespeare in Chinese at Teatro Ca' Foscari a Santa Marta

Last night I was one of the lucky 200 to snag a ticket for the sold-out one-night-only engagement of Love in Shakespeare at Teatro Ca' Foscari, an evening of sonnets and scenes in Chinese, Italian, Japanese and Spanish with Italian supertitles.

It was a project of Ca' Foscari's Professor Jimmy Lam and his Chinese language and translation students which, in addition to being a really fascinating and entertaining night of theatre, doubled as their final exam.

They aced it.
Teatro Ca' Foscari a Santa Marta is a small professional-grade contemporary theater west of San Nicolò dei Mendicoli, and a wonderful place to see a performance. 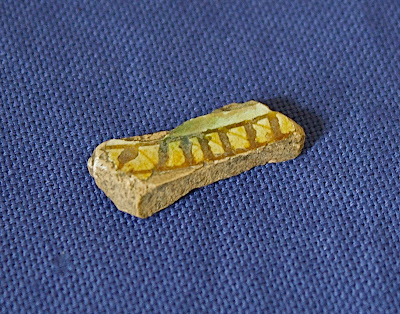 In terms of world historical significance Sandro's discovery of a very small piece of painted ceramic while digging in the community garden behind the church of Le Zitelle doesn't exactly compare to, say, the two 5th-century Greek bronzes of warriors found underwater in 1972 off Riace in Calabria, but in terms of personal historical significance it's been quite a big deal.

It's only a short time since he began accurately using the term "yesterday", and there was a phase not too long ago when the visible age of Venice could just as easily strike him as yucky as interesting.

Just as we acquire a sense of Time only slowly in childhood, so we only gradually acquire a sense of, or interest in, History. Of course some people never get it: I remember hearing 20 years ago about a friend's parents (from Orange County, California) who were disgusted by how run-down Venice seemed.

And some people can't wait to get rid of it. Like an Italian I knew in New York City, born and raised in Florence and with a PhD in Renaissance painting, who'd come to loathe all the history of his hometown. History seemed to him a stultifying burden. He opened a contemporary art gallery in Chelsea and--is this related?--told me when he himself was 40 that he still only dated women in their 20s...

This little piece of painted ceramic, though, smaller than his smallest finger, has inspired in Sandro an interest in History of which he'd previously shown few signs.

When his excitement to tell someone about it gets the best of him, he simply calls it il mio vaso antico (my old/ancient vase). At calmer moments he'll specify that it's a piece (pezzo) of an old vase.

Our Venetian neighbors who saw an exhibition on Venetian ceramics of the 18th Century believe it really is from that period. Another Venetian said it's not that unusual for such fragments to turn up, for example, on Lido. Though Lido seems to me to be one of the less likely places for them to be found, considering that Byron famously went there to ride horses in the early 1800s, and as late as the 1860s Henry James was still remarking on how bucolic a place it was.

In any case, it's become an historical touchstone for Sandro. When we walked through Ca' Rezzonico the other day he had an ardent new interest in paintings of domestic or dining scenes, looking for a vase (or cup or pitcher or plate) that looked like his.

Of course even for adults, and even in a place like Venice, History can be such a difficult thing to really get a hold of. You see the remains of History literally everywhere you turn here, you read about it in guidebooks and history books, and yet to me at least it seems there's no telling what little unexpected detail, what little surprise, what perhaps relatively insignificant and completely idiosyncratic discovery will really bring the sense of the past home to you--or me.

It may be that there's just too much History here, or that some of us are too consciously aware of it, for us really to feel it, to be pierced by it, until we stumble upon our own small personal discovery: not Verrochio's grand equestrian bronze of Bartolomeo Colleoni, but the chisel-pocked white marble of a modest lintel nearby.

In any case, Sandro has announced that the next thing he expects to unearth at the community garden is un piatto d'oro (gold plate). 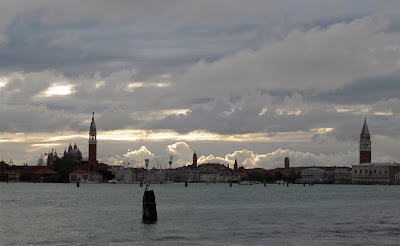 Above you'll see the city's reward after a long day of rain.

Though it turned out not to be so much after as between showers: an intermission rather than the grand finale it appears to be.

Well, brava or bravo, brave or bravi all the same.
Posted by Steven Varni, aka Sig. Nonloso at 3:36 PM 4 comments: 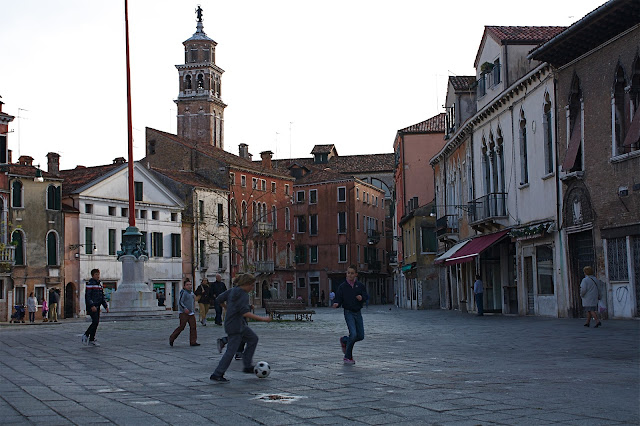 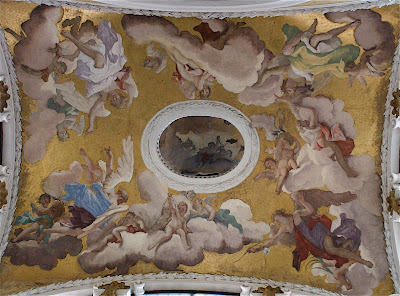 The acknowledged masterpieces inside Dorsoduro's church of Santa Maria dei Carmini are altarpieces by Cima da Conegliano and Lorenzo Lotto, and each is stunning--and rather pricey to see, as the necessary illumination for the former costs 50 centesimi, while the latter sets you back a full euro, and you could easily drop 4 or 5 coins into each light box before getting your fill.

But if you're also in the mood for something a little more redolent of Spring, as I was two days ago on a rainy Monday afternoon, you may get a sore neck from craning your head back to peer at the ceiling high above a side altar but it won't cost you a thing. Up there you'll find the fresco Gloria di Angeli by Sebastiano Ricci, painted in 1709. It has the gold background of the great Byzantine paintings you can see around Venice, but with none of that era's solemnity--or, as Ruskin would no doubt say, piety.

Well, sometimes piety only takes you so far...  As Ruskin's poor wife could attest. 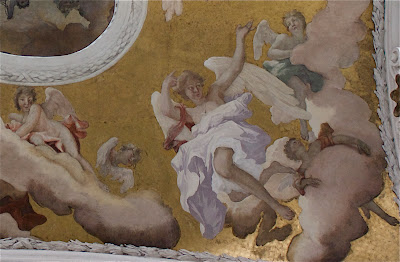 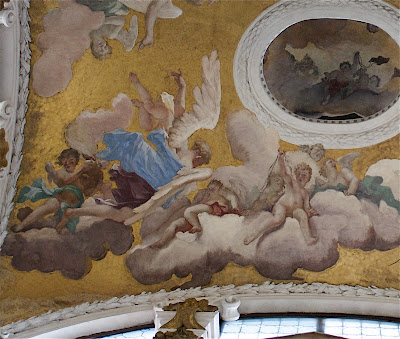 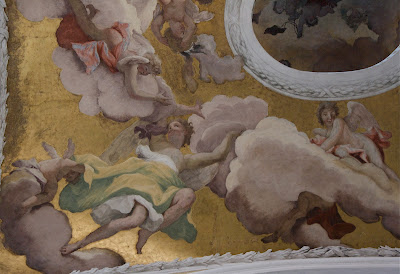 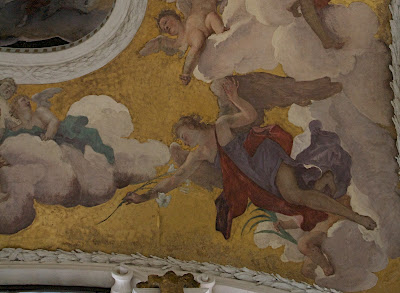 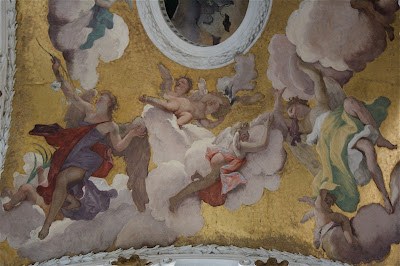 But perhaps Ruskin would have had a point, as I'll admit that one of the things I found myself distantly (and perhaps nonsensically) recalling while looking at Ricci's fresco was a mural of wood nymphs painted in the 1930s by Howard Chandler Christy for an Upper West Side Manhattan restaurant I knew a dozen years ago as Café des Artistes. A very poor and partial image of this mural is below: 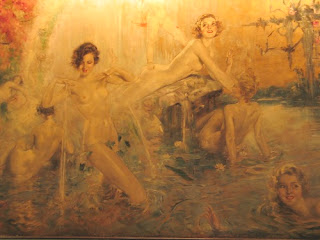 The restaurant closed in 2009, then reopened last year as Leopard at des Artistes. I don't know a thing about this new restaurant except that it serves Southern Italian food and the Italian owners had the good sense to preserve Chandler's series of murals.
Posted by Steven Varni, aka Sig. Nonloso at 7:15 AM 5 comments: 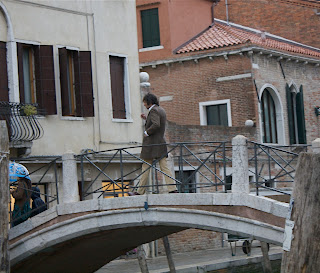 In this city without cars, with its narrow calli and old buildings, it's sometimes easy to feel you've left the present day far behind.

But, in truth, I often get the sense here of living in the past--albeit a more recent one than that of the doges--simply by noticing what people are wearing.

For example, I'll see an older man on a vaporetto rocking a look right out of some early '70s episode of Peter Falk's Columbo or the old Mastroianni film La grande bouffe (1973). I don't know a thing about fashion, but the cut of the man's coat, along with the particular colors and texture of his pants and sweater, say, give me the dizzying sense of suddenly finding myself somewhere else, temporally speaking. A time I may recognize only from old films or photos, or recall only vaguely (but viscerally) from the big Italian weddings of my boyhood in the 1970s.

In New York City you might come across similar clothing worn semi-ironically by some 20-something hipster. But to borrow a distinction from Quentin Crisp, such hipsters are examples of mere fashion, while here in Venice the pensioners are all about style.

Fashion changes year by year. Style is a slow process of discovery, in which one's look comes more and more to fit one's sense of self. Clothes may go out of fashion, and according to fashion's commercially-determined dictates deserve to be thrown away. Style dictates that one hold onto whatever works for him or her, for as long as it does--even a lifetime.

I rarely have a chance to take pictures of Venetians who embody this notion of style, but yesterday, as the afternoon darkened to showers, I left the 16th-century splendors of Lorenzo Lotto and Cima da Conegliano in the church of Santa Maria dei Carmini, walked through one end of Campo Santa Margherita, and found myself suddenly in 1969--at least as I know it from the film Withnail and I.

There before me was Withnail himself--or at least the Byronic late 1960s figure Withnail aspired to be--dressed entirely in period clothing: the tight pants, the sweater vest, the prominent crisp white collar and cuffs, the high armholes of the jacket and its early 19th-century silhouette, the hair, the sideburns, even the kerchief around the throat.

This guy was younger than the Venetians I wrote about above--as well as, I like to imagine, English--but he was old enough (late 30s, early 40s) to have had enough time to develop a look and manner in which style and self seemed perfectly and comfortably merged. And this time I had a camera in hand.

The photos I post are, I hope, clear enough to give you a sense of this particular figure in this particular setting, and blurred enough to obscure the identity of whomever this person happens to be. And I post them as a suggestion that perhaps sometimes the best things to pack for a visit to Venice are things that haven't been in fashion in your hometown for years. 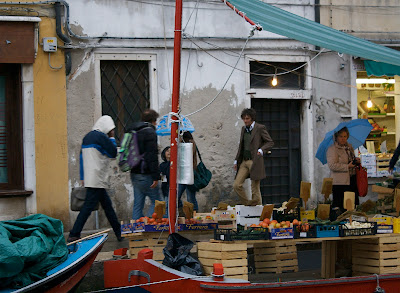