Another Foreigner in Venice--Who's Become Quite Popular 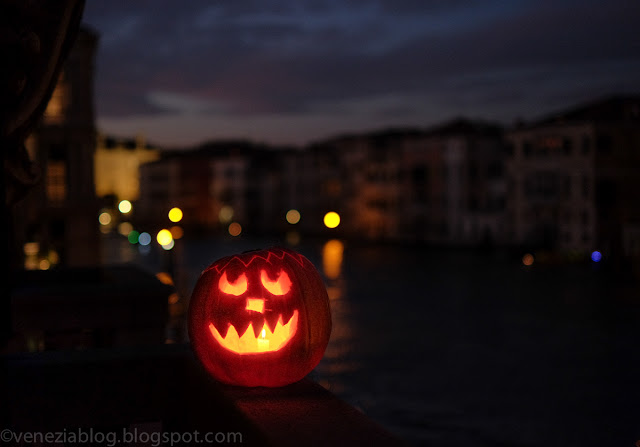 Though not native to the city, Jack O'Lantern (above), and the festivities with which he's associated, have become rather popular in Venice.

Though some few people (and institutions) are no happier about this than they were when I wrote the following post 6 years ago: http://veneziablog.blogspot.it/2011/10/dolcetto-o-scherzetto.html

Posted by Steven Varni, aka Sig. Nonloso at 5:28 PM No comments: 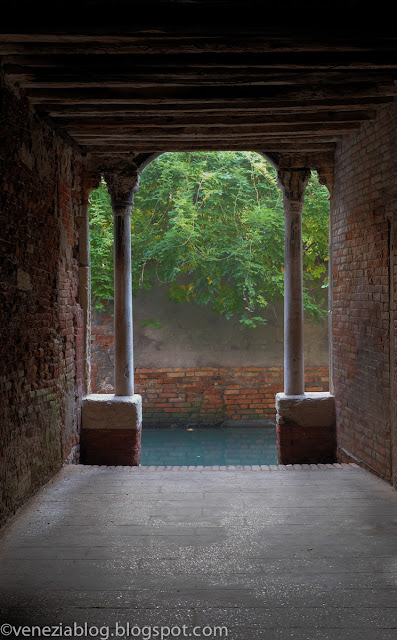 It's the glimpse of the water entrance at one end of the Sotoportego del Filatoio that stops you as you pass by it along the Fondamenta de le Grue. You venture into the sotoportego's depths, drawn by the canal view bracketed by twin columns, then turn and find that the view in the other direction is just as appealing. 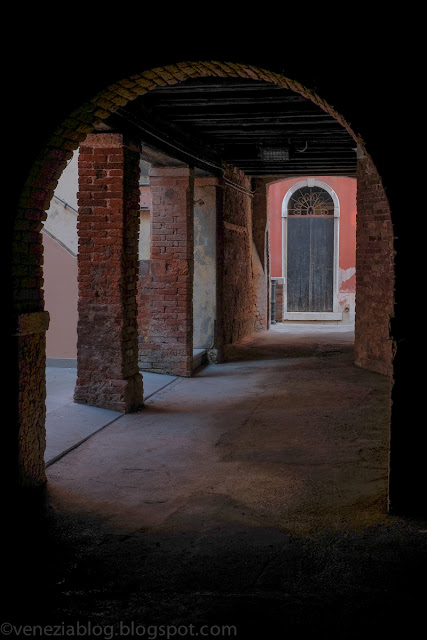 City of Falling (and Leaping, Climbing, and Swimming) Tourists


The other day, on one of the less-frequented calli leading from the Rialto Bridge area toward Campo San Cassiano, my son and I were stopped in our tracks by the sight of a large young man standing on the parapet of a small stone bridge and giving every indication he was about to jump.

It was a bridge we had to cross to get home and as he looked about to jump into the center of the bridge, rather than into the canal below, we had no choice but to stop. The young man's girlfriend was poised with a smart phone on the crown of the bridge, waiting.

After checking that she was ready, the young man leapt with a yowl, landed heavily, then bounced up to see if his girlfriend had captured his heroic leap in all its glory, demanding "Did you get it?" As this digital-age American Narcissus gazed at the little screen, Sandro and I seized on our chance to pass, before they could set up to do another take.

It's not easy being a tourist these days.

In the old pre-internet days you might have anticipated showing the images you took on a trip to friends (and/or victims) when you returned home, envisioning their favorable response.

Now, you can make yourself subject to those responses immediately, by posting images online as soon as you capture them and receiving instant real-time feedback on how well they're going over.

This, in my shamefully outmoded way of thinking about things, seems awful. For it has the potential to make all of us obsessed with our "ratings." Not so long ago, this would have been considered a terrible thing. In movies from the 1970s such as Network, or even from the 1980s, such as Broadcast News, an obsession with ratings was presented as the defining (and corrosive) feature of a soulless, intellectually vacant corporate culture, and depicted as being antithetical to creativity, freedom, justice, and truth.

In the 1960s such quantifiable responses were the sole concern of advertising firms on Madison Avenue.

But I suppose we are all Mad Men now.

We accept such an obsession as a matter of course, as unavoidable, and replicate it even in our own personal lives. The basic human need for social acceptance has been quantified, and turned into a mother lode of information to be mined by the likes of Google, Facebook, et al.

How it actually profits us, as human beings (rather than brands), is open to debate.

What makes all of this worse, though, is that the same social media that quantifies responses to what we post, also makes us continually aware of the infinite competition we have for anyone's (even our closest family members') attention.

To some of us this may not matter. It's enough to know that Uncle Anselm or Aunt Latifa, no matter how far way they may be from where we are, has seen our travel image.

For others, however, it means that only an image of yourself flying through the air--rather than merely standing--before a picturesque Venetian backdrop will do. Or climbing up the facade of the Palazzo Ducale. Or shimmying up an old lamp post in Campo San Pantalon. Or any of the many other simian (or aquatic) tourist feats you're likely to encounter when you live in Venice.

In other words, you can't live in an international destination like Venice and not be reminded of how technology and social media have profoundly altered how we view and experience the world--and what we value.*

And even when the ostensible aim of our travel is to "get away from it all," or at least from our regular workaday life, we carry the cultural ideals of the workplace with us: self-advancement, competition, and the inclination to judge our efforts by how we profit from them. Thanks to smart phones and social media, even our "free time" seems like work, as we (consciously or unconsciously) construct and disseminate the brand of ourselves.

The most venerable and fragile of historical, cultural and/or religious sites become merely location shoots, or sound stages, for the show that is our self.

And what won't some people do for ratings? As television series are said to "jump the shark" to increase their audience share, so tourists jump all kinds of other things. Sometimes even each other.

As John Berendt recounts in his 2005 book on Venice, the heavenly host of statuary adorning the facade of the church of Santa Maria della Salute was in such bad repair in the 1970s that a sign beneath it warned "Beware of falling angels."

These days in Venice, as Sandro and I were recently reminded, the beings likely to crash down upon you from out of the sky are of a purely terrestrial sort.

For an interesting article on "museums" specifically oriented toward being the perfect backdrop for social media selfies see: https://www.wired.com/story/selfie-factories-instagram-museum/  But this trend is evident in traditional museums and art galleries as well.

Dante and Virgil in Venice 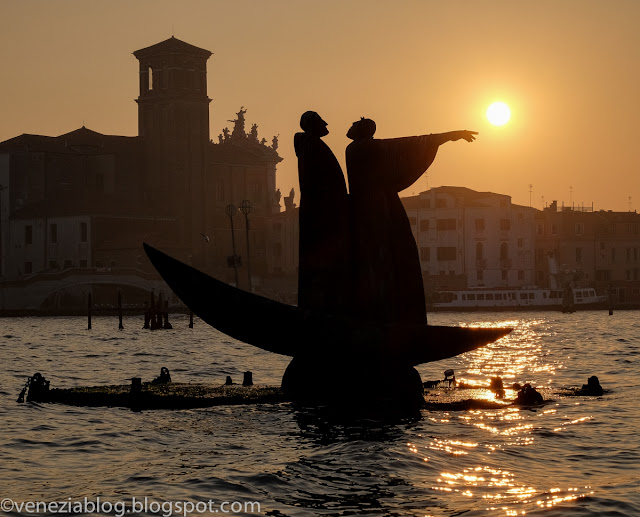 I've never felt the least inclination to form any kind of aesthetic opinion on this sculpture of Dante and Virgil situated in the lagoon between Fondamenta Nove and the cemetery island of San Michele, but I can tell you that its creator was a Russian sculptor named Georgi Frangulyan, that it was placed in its present spot in 2007, and that, considering it weighs 2 tons, any decision to remove it won't be undertaken lightly.

It's inspired by the two poets' crossing of the river Styx in Canto 8 of L'Inferno toward the flaming city of Dis.

Reflections On (or, Of) a Foggy Venice Morning 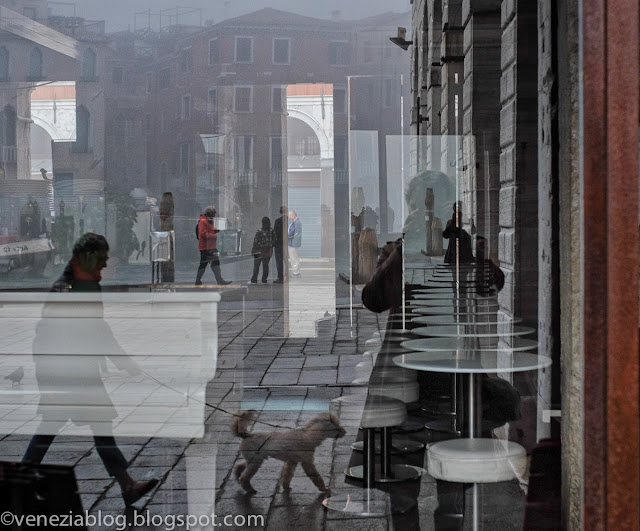 3 Views of the Rialto Bridge in This Morning's Fog 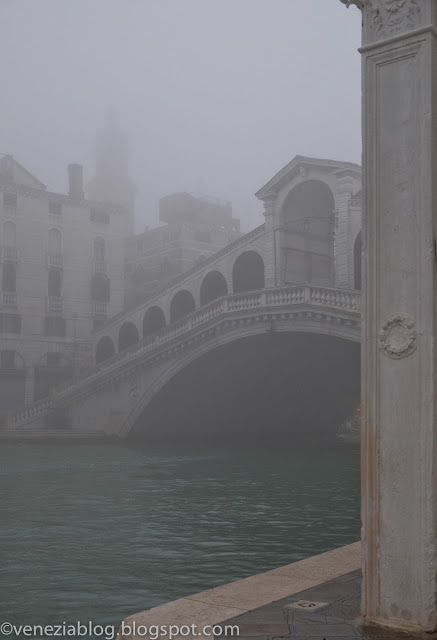 It's not just that Venice looks different in the fog, it's that the fog, by blunting the city's visual assault upon a spectator, diminishing its usually staggering array of details, allows the viewer to look differently at Venice. You see more in less. 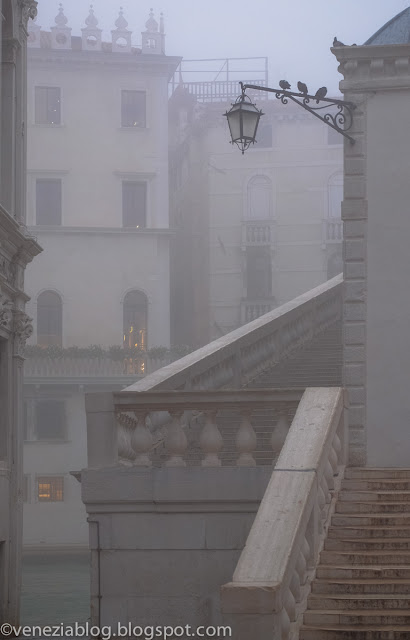 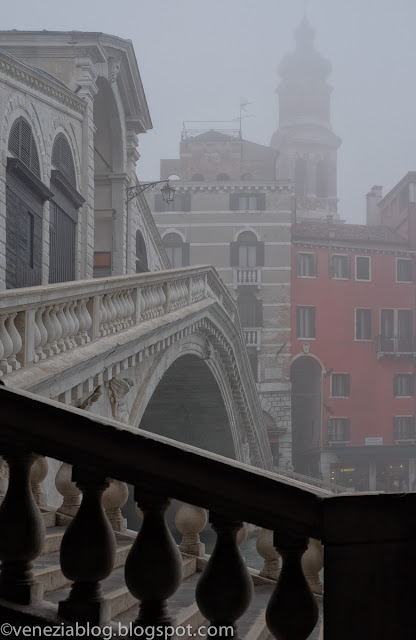 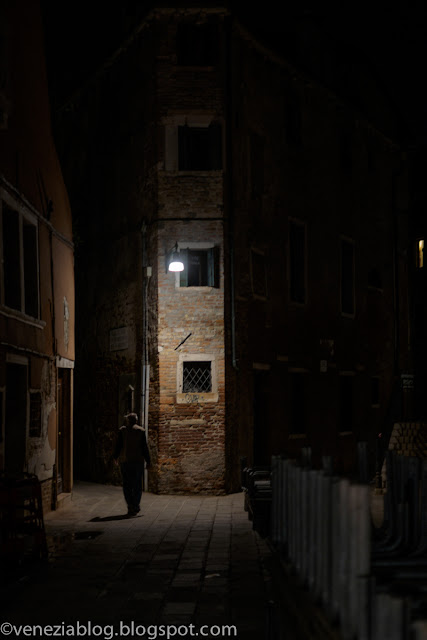 Posted by Steven Varni, aka Sig. Nonloso at 3:37 PM No comments:

Posted by Steven Varni, aka Sig. Nonloso at 9:29 AM No comments: 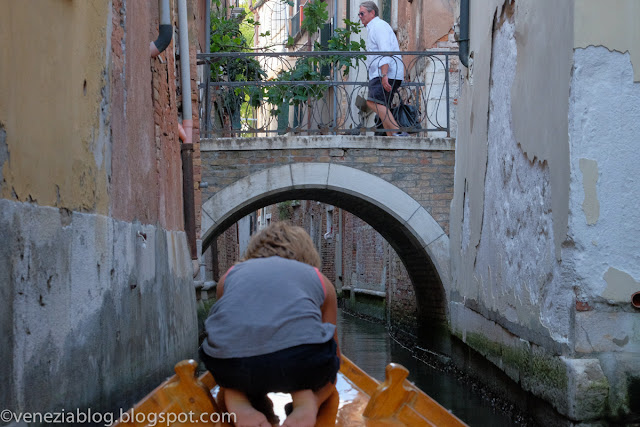 As a Venetian friend told me soon after we moved here, "There are two Venices, one you see on foot, and the other you know only from a boat."

In Venice: The Tourist Maze, Robert C. Davis and Garry R. Marvin put it this way:


Enclosed and walled in rather than scooped out, canals have primacy in Venice, even when they have been whittled down to the narrowness of alleys by competing palace builders: the waterscape of the city is, paradoxically, its bedrock. Even with a good many of them now filled in [a favorite activity of the Austrians in the 19th century], they still represent the most direct way to reach most parts of Venice; unlike the contorted maze of calli, campi, and bridges just above them, they generally make sense, at least to those who have a boat handy to take advantage of them. Which is... to say that they make sense to Venetians, and indeed the canals of the city, or more precisely, getting around on those canals, could reasonably be called the last backstage left in Venice, the final spatial possession of the Venetians.

It should probably be noted, though, that this book was published in 2004, and since that time even this "final spatial possession of the Venetians" has become less exclusively their own. One spends years learning about the city's waterways and observing others in their boats before making one's own timid first ventures into the narrow rii, and you shout out the traditional warning as you approach a tight blind right-angle, receive no reply, idle into the turn and--encounter a pod of kayakers in town for the day. My hope is that the number of kayak tours and kayakers won't--like every other tourist venture in Venice--be allowed to get completely out of control.

Posted by Steven Varni, aka Sig. Nonloso at 5:07 AM No comments: 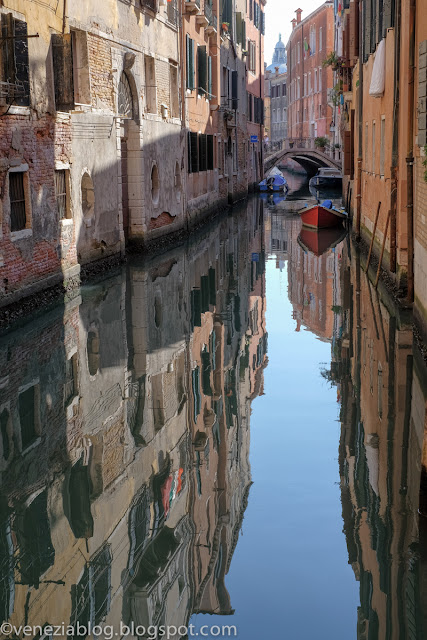 When the water in the rii is still you're reminded that Venice is its own "sister city": the city and its reflection are twins joined at the waterline.

Posted by Steven Varni, aka Sig. Nonloso at 3:27 PM No comments: