"Non ho parole" ("I'm speechless"), posted one indignant Venetian on Facebook beneath his own cell phone photo of the work you see above when the British artist Marc Quinn's "Alison Lapper Pregnant" first appeared a few days ago beside the church of San Giorgio Maggiore.

As this remark appeared on the anti-Gabbiotto-in-Piazza-San-Marco site, I think it expresses as much about how fed up Venetians are with the appropriation of their city (and its most famous sites) by commercial or outside interests as about the work of art in question. But it seems like an appropriate response to the work itself as well, and one that the artist himself would probably appreciate, as the piece requires us to confront in monumental and heroic scale an image of a human being whose form falls well outside what we usually talk about, much less see.

It's hardly a bold new gesture for an artist to foreground what a local newspaper had no qualms yesterday in calling "freaks", and such work is always going to raise questions (as it should) about the artist's motives, and sensationalism, prurience, exploitation. But as much as I sympathize with many Venetians' sense that their city is under attack by malignant forces from without and unscrupulous traitors within, part of me thinks that "Alison Lapper Prenant" really might work as art--that is, something with the potential power to incite thoughts, emotions, ideas, discussion--not just spectacle.

A little background is in order, though, especially for those of us who don't live in England, or London. The model for "Alison Lapper Pregant" is an English artist who was born without arms and with shortened legs. She was institutionalized by her family at an early age and grew up, as they say, "out of sight, out of mind" of both her immediate relations and society as a whole.

The original 3.55 meter (about 11.5 feet) sculpture of "Alison Lapper Pregnant" was made of Carrara marble, weighed 12 tons, and was displayed from September 2005 to late 2007 upon the fourth plinth of Trafalgar Square.

Michelangelo's David is sculpted of Carrara marble, which has been used since the age of Ancient Rome for important public monuments (the Pantheon and Trajan's Column both use it): for the very embodiment of heroism and valor and beauty. To sculpt the figure of Alison Lapper in this material is a bold statement, and perhaps a rather obvious one as well in the way it simply inverts our typical hierarchy of value and moves someone whom society has long been intent on not seeing into the very center of the public gaze. But whatever its obviousness, I'm not aware of any comparable sculpture of such a subject in such material on such scale. The work incites us--or aims to incite us--not only to re-think our notions of what we are in the habit of recognizing as an "acceptable" human form, but what we think of as a life worth living, of heroism, and of motherhood.

It makes me think of two books I've recently read: Andrew Solomon's Far from the Tree, with its intelligent and compassionate examination of the challenges and pleasures of raising any child who for one reason or another falls outside society's narrow sense of what is "normal" (deaf, autistic, schizophrenic, or Down Syndrome kids, for example; prodigies or dwarves or children born of rape) and Barbara Taylor's and Adam Phillips's On Kindness. The latter title suggests, among other things, that one of the reasons the very notion of unsentimentalized kindness has fallen into such disrepute in our age of glorified Hobbesian competition is that we live in a culture that is terrified of vulnerability. Kindness, Phillips (a brilliantly literary psychoanalyst) and Taylor (a historian) suggest, rests upon our capacity to acknowledge that even the most robust of us has known helplessness and, if we live long enough, are likely to know it again. That vulnerability is an inescapable fact of human life, and is what unites each of us to the other. "Alison Lapper Pregnant" strikes me as a heroic image of both truly human vulnerability and strength.

Of course, everything I've written above has more to do with the original sculpture of "Alison Lapper Pregnant" than with the inflatable version (12 meters high/39 feet) that now sits beside the church of San Giorgio Maggiore. Does the piece still work as well if the material from which it is made suggests not Michelangelo and Trajan but some huge blow-up Paul Bunyan advertising a lumber yard?

The Patriarch of Venice certainly does not think so. In today's Gazzettino il direttore dell'ufficio Beni culturali del Patriarcato don Gianmatteo Caputo cites "Alison Lapper Pregant" as the prime example of works of art that do not fit into the sacred context in which they are placed and notes, interestingly enough, that the Church was misled into believing that it was the original marble version of the sculpture that would be placed beside San Giorgio Maggiore. The inflatable version he compares to simply a "banner" (his exact word), whose only purpose is to advertise the large exhibition of Marc Quinn's work (more then 50 pieces, 13 never before seen) put on by the Fondazione Giogio Cini on the island of San Giorgio Maggiore.

I think he has a valid point.

So, as I said, I'm of two minds about this work. After all, though I haven't yet seen the exhibition of Marc Quinn's work on the island, much of what I've seen of it online--from the solid 18-karat gold sculpture of Kate Moss (which manages to be both astonishingly crass and dull) to his transgendered Adam and Eve--seem as obvious as his work on Alison Lapper has always been in danger of being.

To invert our culture's notion of beauty, to present a new vision of beauty and heroism, doesn't the piece itself have to be as beautiful as, according to The Guardian's Rachel Cooke, the original Carrara sculpture in Trafalgar Square was (http://www.guardian.co.uk/artanddesign/2005/sep/18/art)? A painter friend here in Venice exclaimed yesterday after seeing the current work up close that it was just plain ugly: the way the ears were formed (which are supposed to be, after all,"normal" human ears), and especially its purple tint. "Why that purple?" she asked me. "It's like he's trying to make you feel queasy."

I had no response. Carrara marble is white or blue-gray. Perhaps the makers of the blow-up version were aiming for blue-gray but ended up with purple? But the original marble work was, Rachel Cooke notes in her piece cited above, "white and dazzling". So, really, I have no idea, and am not sure, finally, quite what to think about the inflatable piece on San Giorgio Maggiore. Or at least, I can't give a single non-conflicted opinion.

I guess all I can ultimately say is that I suspect that the real work of art--that is, what it actually makes happen or accomplishes--occurs within each of us, and is unpredictable and unquantifiable, and can go forward long after we've left the presence of the piece in question. Some art does something, for some of us, sometimes, and if that's all we can finally say about it, it's still saying a lot. I'll be interested to see and hear and read if the piece on San Giorgio Maggiore works for anyone else. 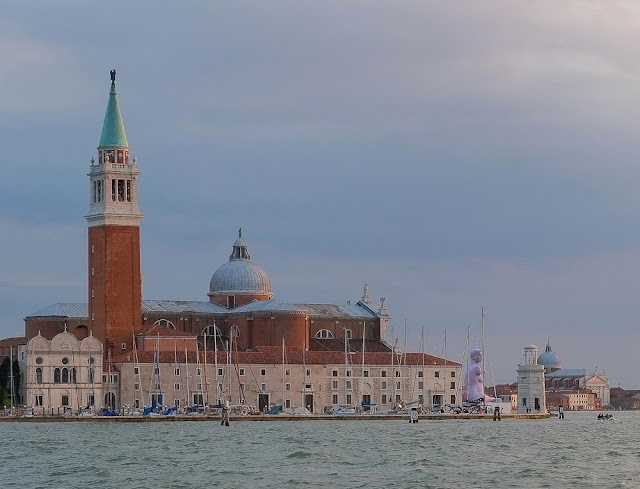