I thought I was going to see the American poet Michael McClure read last night as part of the international event 100 Thousand Poets for Change at Ca' Tron, near San Stae. (A few of the 99,999 other poets were also on the bill, but the rest were spread out at different venues around the globe). Information for the event that I'd found online said the event would begin at 9 pm.

Actually, it began at 5 and, from a report I got from a friend, was packed. I didn't know this when I arrived, nor even as I enjoyed a poetry competition among local poets of all ages, which I imagined were the opening acts for McClure. Until the competition wrapped up,  a young raggae band set up on the stage, and I ran into my friend.

Have I ever mentioned how challenging it can be to get accurate scheduling information in Venice? Even for natives. For example, no one with kids in my son's preschool--not even the typically in-the-know-head-of-the-PTA types--knew exactly when the first day of school would be. We had a general idea, but didn't find out for sure (well, almost for sure; few things here are for sure) until two days before school opened. Only the day before it opened did we get some idea of what the actual hours of the first two days of school were likely to be. Though those were inevitably revised on the opening day itself.

In any case, I missed McClure. But if you ever have the chance to catch a poetry competition at Ca' Tron, which is the seat of the Università IUAV di Venezia (an architecture, urban design and arts school), it's worth a visit, even if your Italian is limited, just to take in the scene. They also host films and other events open to the general public.

Last night's competition was won by Gigi, an older poet who uses dialect in his works. Though he's often in Venice for business, he told me as we caught a ride home together on the vaporetto, he lives on the mainland, in the countryside. He grew up in the mountains, near Belluno, and though the language he grew up speaking would be considered part of the Venet language spoken throughout the old Venetian Republic, he told me about the differences between his native tongue and that spoken in the lagoon. He also reminded me that such differences between mainland and lagoon were hardly surprising when one considers the differences in language spoken even to this day by natives of, for example, the Giudecca compared to those of Castello, of Castello to Chioggia, of Chioggia to Malamuoco....

In light of which the complexities or ambiguities or multiplicities of scheduling seem to pale.

Posted by Steven Varni, aka Sig. Nonloso at 8:36 AM No comments:

There's no end of competition for the contemporary artist in Venice. As good as the works are in the Chinese Pavilion, I couldn't help becoming obsessed with the huge old fuel tanks lining the walls of the massive warehouse. 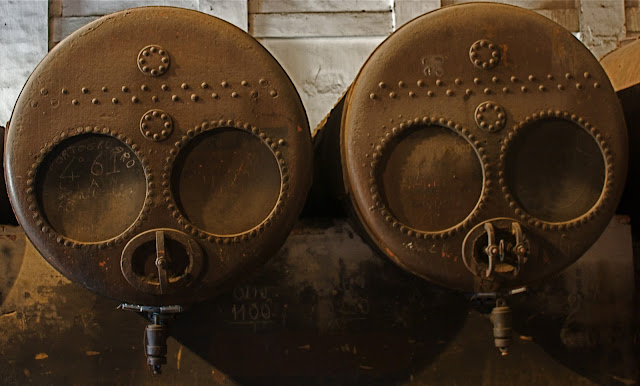 Procession of the Madonna, Church of Sant' Elena, This Morning 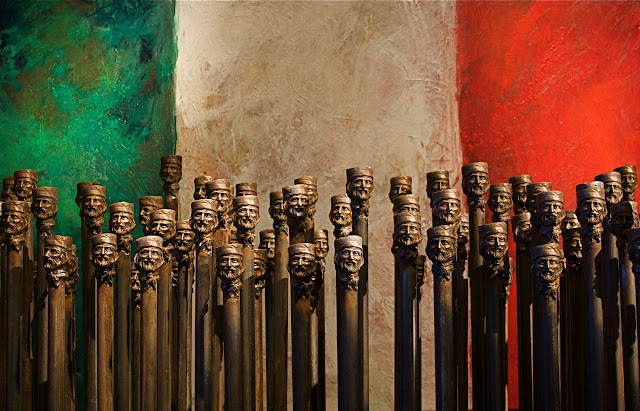 A thicket of Garibaldis: detail of the work Innocente Italia by Lello Esposito (acrylic on canvas, bronze and iron).
Posted by Steven Varni, aka Sig. Nonloso at 6:58 AM No comments:

Posted by Steven Varni, aka Sig. Nonloso at 7:13 AM No comments:

It's hardly been more than two days since we got relief here from the high temperatures and humidity of August and, having complained more than enough about the oppressive weather (and being without a functioning air conditioner), I would have expected to be happy now that the temperature has dropped into the high 70s (or mid 20s C). Instead, having suddenly noticed the fallen leaves under my feet, I'm already ridiculously nostalgiac for summer...

And so, indulging this absurd nostalgia for a month hardly past, I post a photo below taken at sunset on August 11--right in the thick of the heat (but when our a/c was still actually working). Imagine yourself sitting on a bench at the edge of Sant' Elena, coated with a light layer of perspiration, and with the mosquitoes really starting to come on all around you in the heavy air, and it will almost be like you're there.

Though you, unlike me, may have the good sense to simply enjoy the first signs of autumn (if you're in the northern hemisphere). To which I promise to resign myself soon. But not just yet. 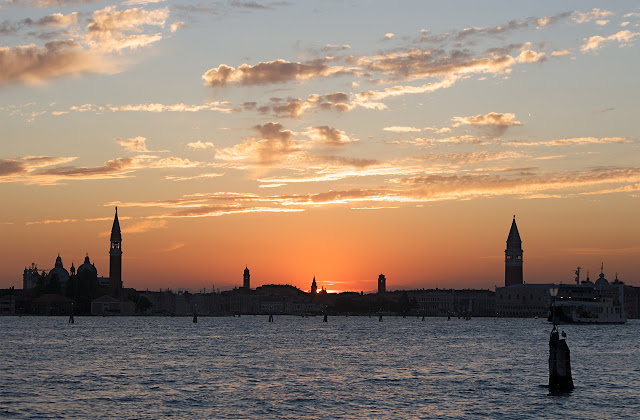 Continuing the Lido theme of the last few posts, today we head down the beach a ways to the Venice Film Festival with some exclusive photos--available only on this site!--by photographer Federico Roiter, who was previously kind enough to provide photos of the the Spettacolo dei Burattini (or traditional Italian puppet show) from the Festa di San Pietro di Castello (http://veneziablog.blogspot.com/2011/07/festa-di-san-pietro-di-castello.html).
I'm no expert on film, but I think Madonna is one of the worst actors I have ever seen. Thankfully, she's at this year's festival as a director--of a story based upon the romance of Wallis Simpson and Edward VIII. The film itself hasn't gotten very good reviews, but the woman does know how to make an entrance.

I don't know if Federico was in a tree to get the above shot of the director with two of her stars (Andrea Riseborough, Abbie Cornish) behind the scenes, but I find it an interesting contrast to the photo below, as she approaches the press conference stage with the determination of General Patton. 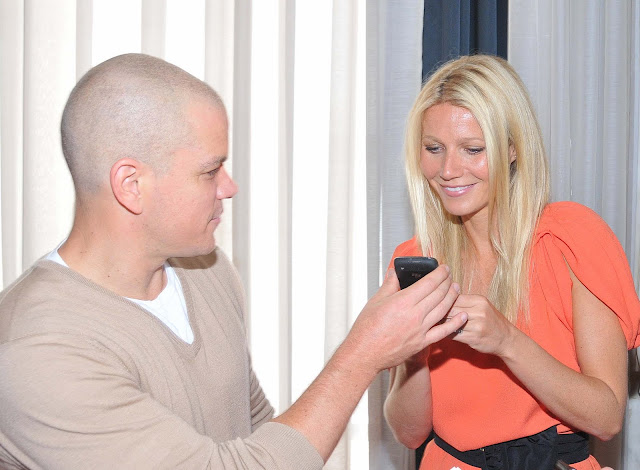 Matt Damon and Gwyneth Paltrow co-star in Steven Soderbergh's Contagion, which, like the Madonna film W.E., is being shown "Out of Competition" at the festival. That is, as an "important work by a director already established in previous editions of the festival." If anyone has any ideas about what Mr. Damon may be showing to Ms. Paltrow on his iPhone I'd love to hear them.

George Clooney is at the festival this year as the director and co-star of the in-competition film Ides of March, in which a young campaign press secretary played by Ryan Gosling finds out just how nasty American presidential campaigns can be. Evan Rachel Wood, pictured above, also stars.

Kate Winslet stars in no less than three films being screened at this year's festival: Todd Haynes' Mildred Pierce, Steven Soderbergh's Contagion, and Roman Polanski's Carnage, set amid the "mean streets" of our old neighborhood of Park Slope, Brooklyn. Actually, Carnage involves a meeting between two pairs of parents who get together to discuss what should be done about a playground act of bullying perpetrated by one couple's son against the other couple's son. In such gentrified surroundings and with such civilized intentions everything should work out just fine--but this is a Polanski film... And one that I'm eager to see.

Finally, who is this man? He looks so very familiar, I'm fairly sure he's a director, but Federico did not label the photo and I haven't gotten in touch with him yet to find out. Help...

P.S. For even more candid--much much more candid--glimpses of three major Hollywood leading men (and lovers of Venice), I refer you to one of the early posts of this blog: http://veneziablog.blogspot.com/2011/02/il-sputinato-di-venezia.html
Posted by Steven Varni, aka Sig. Nonloso at 3:56 PM No comments: