Outside Looking In, Rio dei Mendicanti 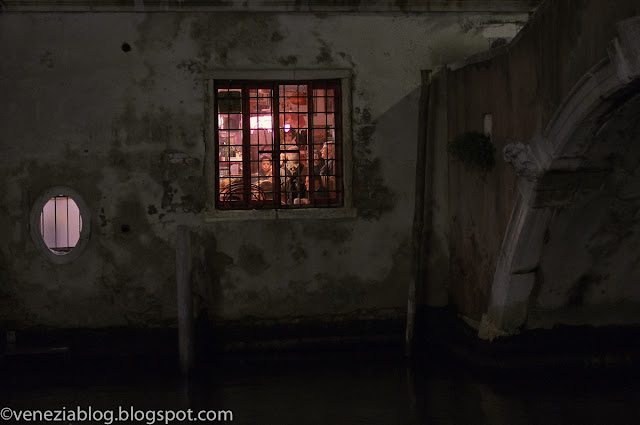 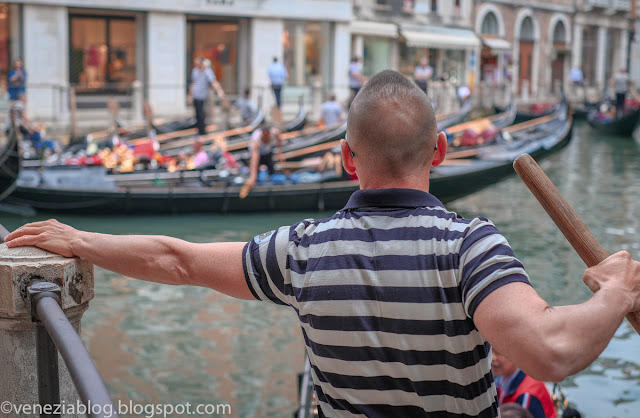 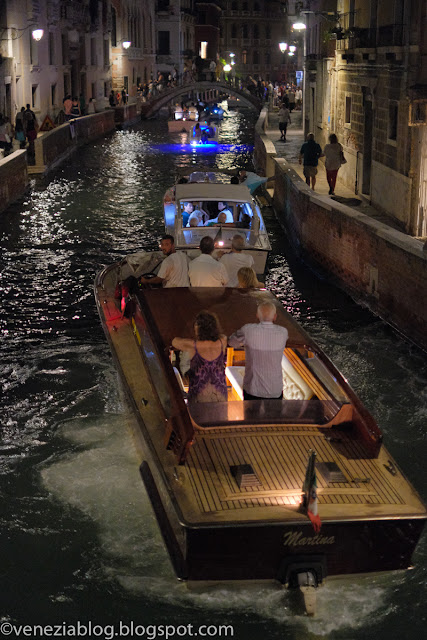 And for views of the festival from many many different vantage points, enter "festa del redentore" in the "Search This Blog" box in the right margin near the top of this page.

Posted by Steven Varni, aka Sig. Nonloso at 4:47 PM No comments:

Email ThisBlogThis!Share to TwitterShare to FacebookShare to Pinterest
Labels: Events in Venice, Living in Venice

The Funniest Art Currently On Display in Venice


"The worse your art is," the great American poet John Ashbery once said in an interview, "the easier it is to talk about."

I'm reminded of this remark whenever I encounter a work by a living (if not quite "contemporary") artist whose sculptures in recent years have come to be a pretty much constant presence in Venice.

The very first time I saw one of his pieces it was situated on the long stretch of loading docks that run along the Canale della Scomenzera, amid pallets of construction materials and gravel and garbage bins.

A life-sized tank, it was, held by a hand so over-sized as to make the former appear like a toy and extending upwards just beyond its wrist, where it abruptly and smoothly terminated like Thing T. Thing in The Adams Family.

I had no idea what it was the first time I passed by it on the vaporetto, nor the many times I passed by it afterwards while it sat unmoving and neglected amid the constantly changing array of trash containers and building materials for a period of many months. Could it be art? I wondered at one point. But it was such a puerile piece it seemed too great a stretch to apply the term, in any but the loosest sense, to it.

Perhaps it had once formed part of a promotional display, or an amusement park for children.

Whatever it was, or had been, no one seemed to want it. It sat there uncovered in all weather for what I seem to recall was at least a couple of years before someone, mercifully, hauled it away.

Eventually, I'd discover that, yes, indeed, it had at one time been created as a work of art and had been shown in the 2011 Biennale in the Italian Pavilion.

It was the kind of piece I was happy to forget all about.

Until 2017, when not just one but two of the same kind of over-sized hands appeared in the Grand Canal, rising up from its water to support the facade of the Hotel Ca' Sagredo. Not to feel up the old pink facade, or to tickle it. No, neither of those things, but--and make no mistake about it!--to SUPPORT it. For that was the title of the piece, displayed in large letters on a banner hung from the hotel's main balcony, lest anyone succumb to the temptation to tease any other meaning from the spectacle.

And what a spectacle it was! Front page of the New York Times! Backdrop for innumerable selfies!

Now this was an important piece! Why, it told you so itself! Exhaustively, in an artist's statement that told you precisely the piece's significance. And that significance was huge, it was massive, it was profound and very moving, and many people were, as they should have been, very moved indeed. Why, it was all about saving the fragile city of Venice, supporting it in all its ancient beauty.

Who in the world could disagree with such a statement?

After all, a whole century had passed since those trouble-making Futurists suggested just the opposite: that the old city of moldy stones, with all its oppressive history and romance and "magical moonlight" be pulled down: the canals filled in and the lagoon transformed into a mecca of modernity, with fast motorcars and trains and aeroplanes. Murder the moonlight! they cried. Put the tired old tart of a city out of its misery, worn out as it was after centuries of prostituting itself.

Well, no one says such horribly nasty things today!

Not even the very people themselves who are most avidly prostituting the city, most busy destroying quite literally its very foundations, most frantically wringing the last juice of profit from the old rind. Every single one of those people and companies, from Venice's non-resident Mayor "Cruise Ship", to all those pigs fattening themselves from the trough of the corrupt and ever-inoperable swindle known as MOSE, to all the speculators, large and small, who have turned 6 of every 10 apartments in the city into a tourist rental--every single one of these entities will, with one voice, assure you they are supporting Venice.

So what does it mean to actually "support" Venice?

Well, that's a rather complicated question: one which a simple exhortation, no matter how big the banner, no matter how selfie-worthy the spectacle, no matter how explicit and even moving the explanation of the work offered by the artist himself may be, doesn't even manage to acknowledge, much less raise.

The popular success of those two giants hands, in fact, stemmed precisely from the fact that their ostensibly bold exhortation, for all its bullying over-determination, proclaimed quite simply nothing.

In a culture in which everyone seems to be just waiting to take offense, it managed to offend no one at all, because, in the end, for all the artist's over-explanation, "support" is one of those words, like "freedom," which can mean whatever anyone wants it to mean. (Every American, for example, enjoys total "freedom"--they just can't afford to quit their job and lose their health insurance lest an illness wipe out every cent of savings they have and drive them deep into the abyss of debt, if not death.)

But, regardless of my own opinion of that work, it was a smash. Of such magnitude, in fact, that the Hotel Ca' Sagredo parted with it reluctantly, and only after city authorities informed them that the exhibition permit needed to display the work on the Grand Canal had expired and could not be renewed.

After the hands were hauled away, the hotel soon installed another work by the same artist in the same location, and it is there still. A work which, though much smaller, exhibits what I consider an equal level of... artistry.


Indeed, if the work of this particular artist floats your boat, you're in luck, as there's a display of his works currently running at the Arsenale that includes not just a new expanded version of those giant hands but smaller (though still monumental) works involving the entire human figure akin to that currently posted outside Hotel Ca' Sagredo.

I encountered them a couple of weeks away quite by accident, having gone to the Arsenale to see the boat show. The boat show ran for just a few days, but the art on display is slated to run, I believe, through the end of the Biennale in late November.

The newest monumental work by the artist of the giant hands "improves" upon Support by multiplying the pairs of hands from one to an even half dozen, and supplying not just, indoors, a smaller (though still large) working model of the gargantuan work situated outdoors, but extensive and detailed wall text explaining the precise meaning of each and every pair of hands.


The pairs of hands, it seems, are nothing less than emblems, not just expressive of something or other, but actually educational and inspirational, according to the very specific wall text.

Again, I was reminded of a quotation. In his dialogue entitled "The Critic as Artist," Oscar Wilde has one of the participants declare: "There are two ways of disliking art. One is to dislike it. The other, to like it rationally."

I'd change this slightly to: "There are two ways of disliking art. One is to dislike it. The other, to create and post explanatory wall text beside it." (And there's no shortage of these at the actual Biennale itself, by the way.)

The problem I have with this particular artist whom, to my amusement, seems to be becoming as associated with Venice as Tintoretto, is that, ultimately, his works are just so limited, so earnestly self-defined, such dead ends, in other words.

If living in Venice teaches you anything it's that you shouldn't put too much faith in road maps-- especially those that try to tell you just which way you should go.

But mine may be a minority opinion, perhaps entirely idiosyncratic, or even idiotic--and I'm as okay with that as I am with those who enjoy the works. Indeed, they did seem to be enjoyed by people at the boat show.

And I have to admit that he's one of the few artists now on display in Venice whose works invariably make me laugh out loud upon first sight of them. Though that may not be their creator's intention, I very much appreciate the effect anyway. 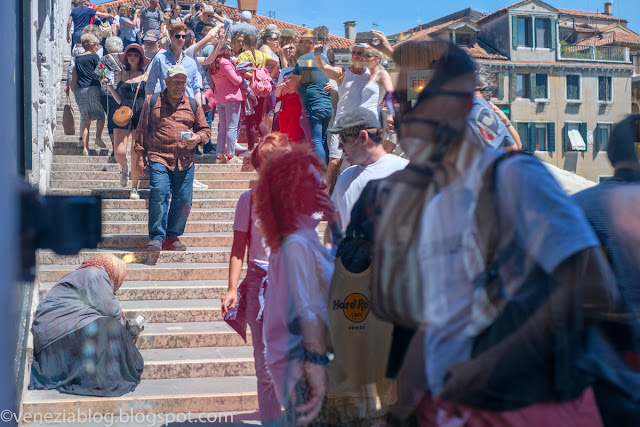 How Much Is That Doggy In the Window? Campo dei Gesuiti 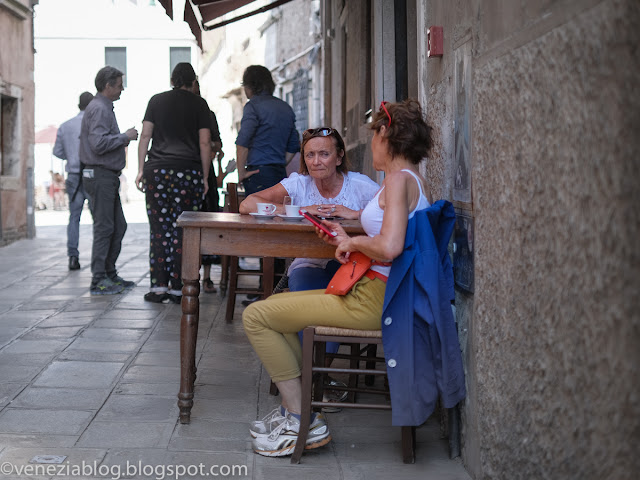 Posted by Steven Varni, aka Sig. Nonloso at 7:20 AM No comments: 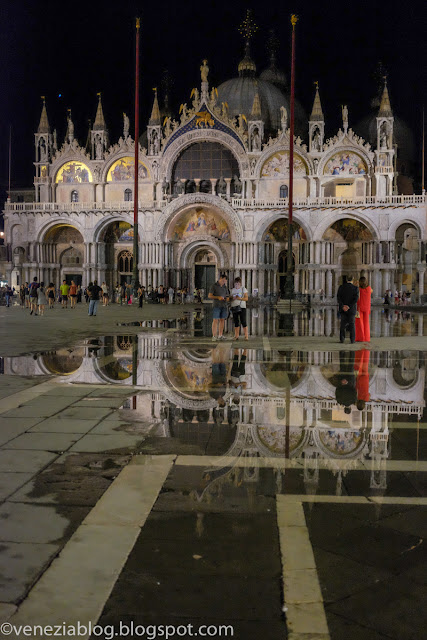 Like Christmas in July, acqua alta in July upends expectations, as the latter, no less than the former, is more typically a December (and, more generally, winter) event.

But at least in the heat of July the irresistible urge that overtakes certain tourists to splash (or even swim) in the puddles of sewer water--or allow their children to do so--seems slightly more understandable, if no less foolish, than it does in the middle of winter.