All Quiet Grand on the Canal (Updated March 1)


(Updated on March 1, 2020 to reflect latest information on schools closures in certain Italian regions and America's CDC recommendation about travel to Italy.)

As reported in the NY Times (and elsewhere) in recent days, the threat of the coronavirus has led to a substantial decrease of tourist revenue all around Italy, with a significant percentage of hotel reservations and guided tours cancelled, and usually-packed tourist venues left unseasonably quiet.

For those who depend upon tourist traffic to keep their businesses afloat, to even mention such coverage is equivalent to stoking "exaggerated" fears--but I sincerely doubt that I'm telling people anyone reading this anything they haven't already read or heard.

Here in Venice supermarkets and the markets of the Rialto are open and stocked as usual. The streets are certainly less crowded with tourists than would be typical at this time of year, but there are some. Public institutions--the city's museums, for example--are scheduled to re-open on March 1.

Our son's school already had a week-long vacation scheduled for this past week and so he hasn't missed any classes because of the virus.

The governor of the Veneto region initially declared that schools would also re-open on March 1. But it has now been announced that schools in the Veneto, Lombardy, and Emilia-Romagna will remain closed until March 8

As of March 1, the latest statistics on the corona virus in Italy, as reported in La Repubblica, are: 1,049 people have tested positive for the virus, 50 have recovered from it, 29 have died.

There are people who complain that the precautions taken by Italian authorities are "excessive"--not surprisingly, many of those thus complaining have something they'd like to sell visitors to Italy.

But when dealing with an easily transmissible new virus whose ramifications are unclear, I think erring on the side of caution is admirable.

In my native land most indications suggest that the governing regime is aiming to go the full-on authoritarian propaganda route, demanding that the "messaging" of all health officials first be cleared with the office of the Vice President, while the President himself spews (as is his trademark) a daily stream of lies: making, for example, the shamelessly irresponsible and easily-disproved claims that the current number of COVID-19 cases in the U.S. is “going very substantially down, not up,” and that "within a couple of days [the 15 cases known in the US at that time] is going to be down to close to zero."(As of March 1 the number of confirmed cases, in fact, stands at 73, in a country which to this date has actually tested far fewer of its estimated 326 million residents than has Canada's province of British Columbia, population 5 million.)

The Travel Health Notices section of America's Center for Disease Control website currently places a trip to Italy in it highest alert category: "Level 3, Avoid Nonessential Travel—Widespread Community Transmission." The website states:
But considering the corruption, incompetence*, criminality, and cruelty of the current American regime, and its leader's overt conviction that the only thing needed to boost the plunging stock market (and hence his re-election odds) is a consistent program of lies, I suspect one might be safer making a visit to Italy--or anywhere else in Europe where, at least, the potential seriousness of the threat is acknowledged--than to any number of US states.

* And here I speak specifically of incompetence in the handling of the coronavirus threat, as detailed in a recent report by a whistle-blower within the department of Health and Human Services: https://www.washingtonpost.com/health/2020/02/27/us-workers-without-protective-gear-assisted-coronavirus-evacuees-hhs-whistleblower-says/

Taking no chances with a novel virus that is still a long way from being understood, regional authorities shut down Venice's Carnevale two days ahead of schedule.

Italy has the highest documented number of cases of the virus of any country outside of Asia and Italian authorities are taking the matter very seriously. Villages have been quarantined, and across Northern Italy public events have been canceled, and schools, universities, and museums closed until at least the beginning of March. Giorgio Armani live-streamed his recent runway show rather than stage it before an audience and even the biggest match-up of the country's professional soccer league this week will likely be played in an empty stadium.

Given the volume of tourists from all over the world passing through Venice, and the fact that 1 out of every 3 Venetian residents is over the age of 65 (and the virus appears to be most deadly to those who are older or have underlying health issues), Venice had little choice but to cancel what remained of the carnival.

Not only cultural institutions and schools here, but even Catholic masses have been closed to the public.

There is no sense of panic, and no gaping holes on the shelves of supermarkets at this time; the Rialto fruit and vegetable markets and fish market are open.

But the streets here are emptier, not just compared to the crowds that would normally pack them during the last days of Carnevale, but to those of other quiet winter periods.

These images taken yesterday in the late afternoon, at a time when Piazza San Marco and the area in front of the Palazzo Ducale would typically have been packed during Carnevale, suggest, I hope, the broader situation in the city right now, which can at times be eerily quiet--even for someone who loves its quiet.

I appreciate the city's caution though, and worry for those living under authoritarian regimes where even a public health threat of this sort can politicized, and considered only from the vantage point of how it might be used to boost the power of the "dear leader" or, as the case may be, the self-proclaimed "everyone's favorite president." (Indeed, the latest recipient of one such country's highest civilian honor has already taken to the airwaves to announce the virus is nothing but the "common cold.") North Korea is one such country, Russia is another, and my native land, whose thuggish autocrat admires the leaders of such regimes, is, I fear, a third.

Here's a link to the best discussion I've seen of the virus: it encourages caution, but warns against panic. 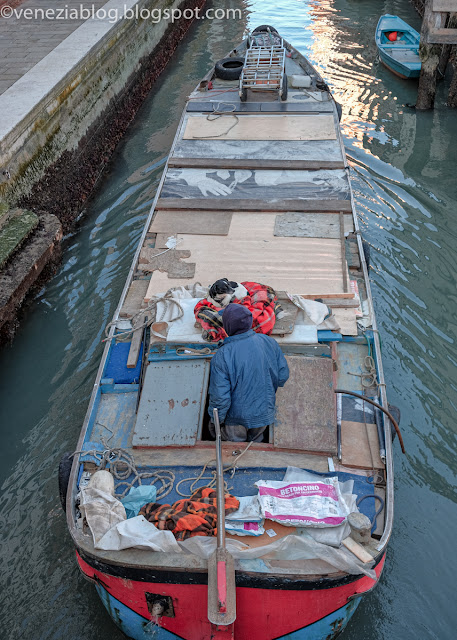 Out and About: 6 Views of Carnevale This Evening 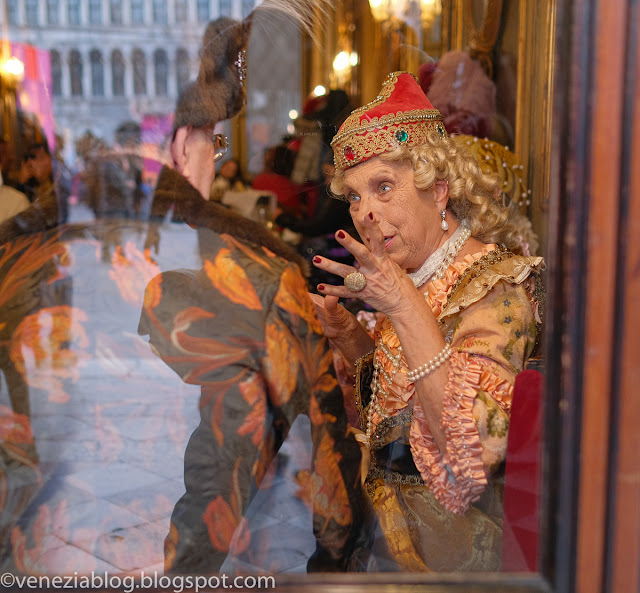 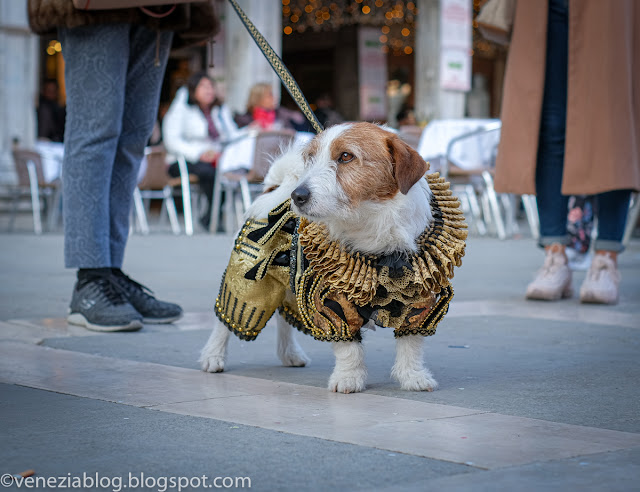 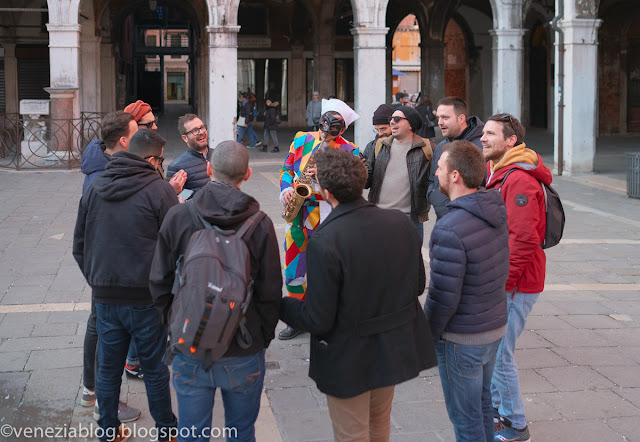 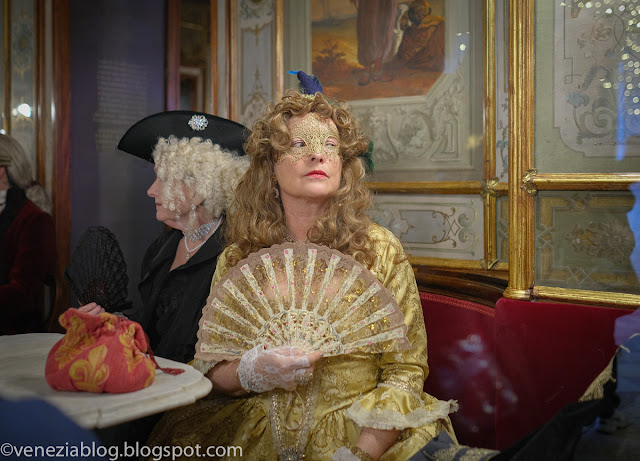 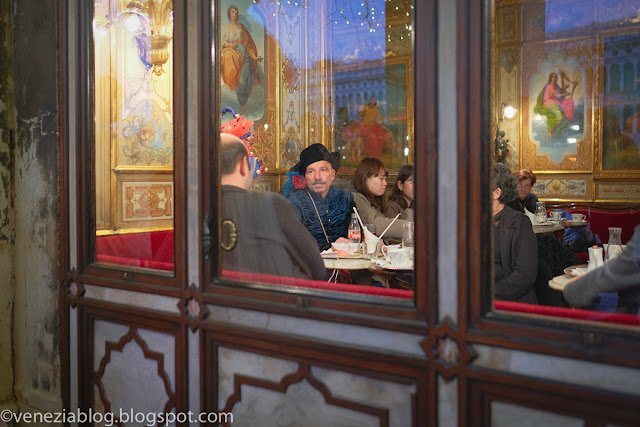 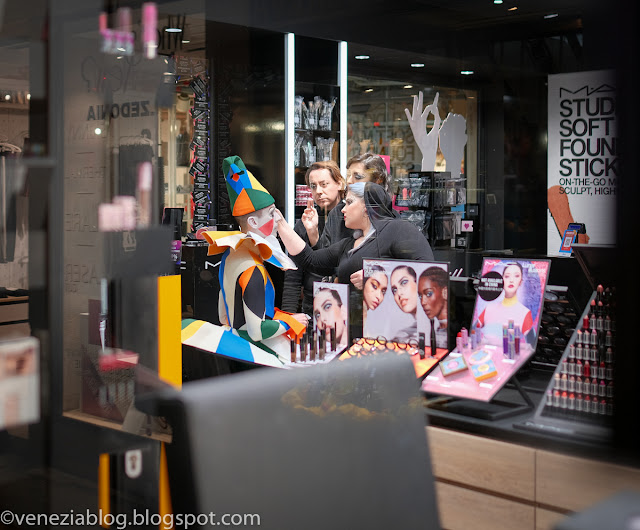 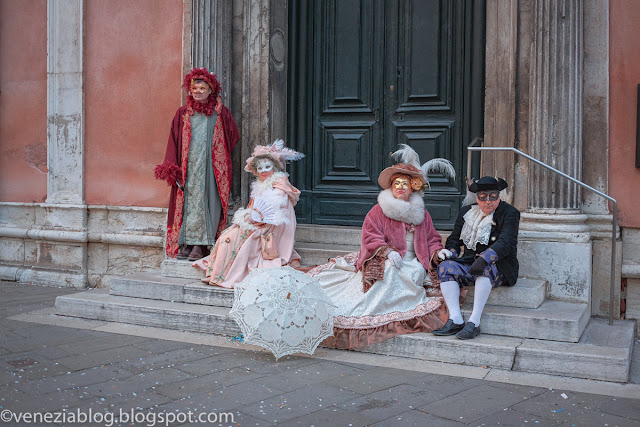 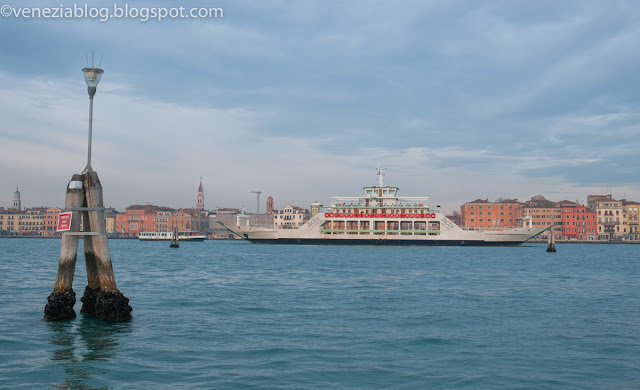 Posted by Steven Varni, aka Sig. Nonloso at 10:52 AM No comments: 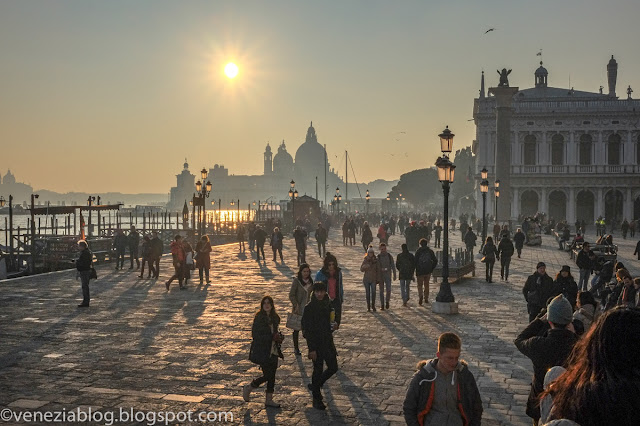 People Are Already Wearing Masks in Venice--But Not for Carnival


A full week ahead of the official opening of Venice's carnevale on February 8 people were already wearing masks.

But, as you can see in the image above, they were the kind of masks that raise questions about whether the threat of the coronavirus will diminish the turnout for carnival festivities this year.

Local papers reported that the world-wide coverage of last November's exceptionally high tides resulted in the cancellation of about 50% of Christmas season lodging reservations. Will the specter of a pandemic do the same?

Those who work at the Fondaco dei Tedeschi, however, may have particular reason to be concerned about their susceptibility to the virus, as the Fondaco exists specifically (I'm tempted to say almost solely) to cater to Chinese tourists.

Shortly after the opening of the Fondaco I read an interview with the German CEO of DFS, the Hong-Kong-based company which occupies the Fondaco, in which he said that in opening this store in Venice they were simply "following our market." That is, the explicit aim was not to create a new market for their goods in Venice, but to cater to their already-existing Asian market in a European site of mass Asian tourism. The Fondaco was created to receive mass tourism from the East (and might be considered a kind of post-modern version of the commercial quarters occupied by Venetians at the height of the old Venetian republic in eastern locales such as Constantinople and Alexandria).

And while locals work in the Fondaco, and deliver goods to it, I don't know of any who actually shop there. For, in spite of what it calls itself, it's not really a department store (as Coin used to be for many years, just 10 or so meters away from the Fondaco). You can't, for example, find a pair of socks there if you need one.

No, the Fondaco dei Tedeschi is merely a "luxury" duty free shop (which is the specialty of the DFS corporation, and the meaning of its acronym) plopped down in the historic center of Venice, featuring the usual reduced selection of designer goods one sees in international terminals of airports around the world.

In Venice, however, this curtailed selection is rather odd, as every luxury brand on display in the Fondaco has a flagship boutique just a short walking distance away (most of them clustered together on Calle Larga XXII Marzo). So that I feel bad for those large Chinese tour groups of eager shoppers who are led by their guides into the relatively meager offerings of the Fondaco when full-sized boutiques filled with complete product lines lie hardly more than a few minutes off.

In any case, China's curb on outbound travel is expected to have a major impact of tourism-based businesses worldwide, so a duty-free-shop like the Fondaco dei Tedeschi geared toward Chinese tourists has reason to be concerned about a precipitous drop in its clientele--as does the tourism-based city of Venice itself.