The View from Beneath the (Rialto) Bridge: Fondamenta del Traghetto del Buso 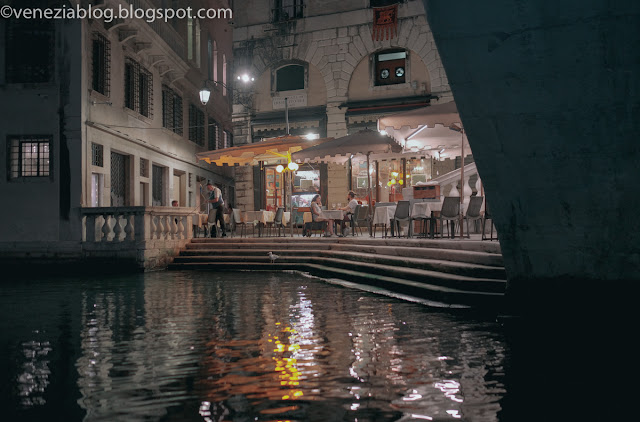 Europe Is Re-Opening--and Americans Are Not Welcome


Good news, if you're a resident of China, Vietnam or Uganda! You're likely to be allowed to travel to Europe when the EU begins to re-open its countries to non-EU citizens on July 1.


But because of the shocking ineptitude and cynicism of its government's response to the novel coronavirus, residents of the United States, on the other hand, are likely to find themselves lumped in with a couple of other notoriously corrupt authoritarian/kleptocratic states, Russia and Brazil, as being prohibited from traveling to Europe this summer.

In a country such as the US (or Russia or Brazil) in which even the most globally-accepted fact--such as evidence that wearing masks can slow the spread of the virus--is dismissed by its ruling party as a fiendish politically-motivated assault on individual or national sovereignty, it's no surprise that you can already find those who suggest this ban on American travel to Europe is simply political tit-for-tat, as American travel industry analyst Henry Harteveldt does in one of the articles linked to above:


“This may be a political maneuver,” [Harteveldt says]. He pointed out the U.S. hasn’t allowed international visitors into the country since March, and “It’s possible that if the U.S. rescinds its travel restrictions, the E.U. may decide to let in U.S. visitors.”

This kind of comment rather tellingly assumes (or projects) that the EU's decision-making process ignores scientific evidence as completely, callously, and cynically as does the ruling Republican party of the US.

But even a quick glance at current infection numbers and trends in the United States would suggest to anyone whose mind has not been thoroughly corrupted by partisan or nationalist propaganda that there are extremely good reasons for Europe to keep American residents out, as it's reported in today's Washington Post that Wednesday's number of new coronavirus cases in the US surged to an all-time high.

38,115 new infections were reported by state health departments on Wednesday, breaking the old one-day high of 34,203 set on April 25, and making the United States the only country in the world whose latest number of new infections surpasses, after a slight decline, its previous peak reached more than two months ago.

And as you look at the graph below from three days ago, remember that the green line indicating the new cases in the US would, as of today, be quite literally off the chart: having hit 38,000 cases, well above the graph's scale which ends with 30,000. 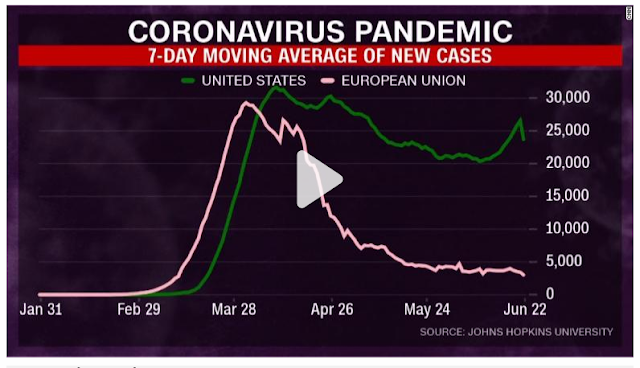 And contrary to the assertions of the pathological liar now occupying the White House, and the overtly authoritarian party he heads, this increase in infections can not be explained away by increased testing, no more than the virus itself (with its disastrous human and economic effects) would simply "fade away" (Trump's exact words last week) were the US to do less testing. (Though in pursuit of this blatantly delusional end, amazingly enough, the Trump Administration is indeed planning to cut federal funds for testing--and primarily in one of the country's hardest hit states, which also happens to be a state Trump must win for re-election.)

It seems to be a characteristic of the corrupt--whether individual or community or political party--that they unfailingly (and often falsely) project their own warped sense of the world and selfish motives onto others, and I hope this will be the case as regards Mr Harteveldt's comments about the EU's decision-making process on whether to let American (or Russian or Brazilian) residents visit the EU this summer.

As much as I'd like to see residents of my native land in Venice--especially after our own flight to visit family in the US was canceled and our planned visit scrapped--nothing about America's handling of the coronavirus presently justifies the risk.

And this is a profoundly sad commentary not just on the needless suffering now going on the US, but on the degraded and abject figure that the US now cuts in the world.

But if Americans can't visit Italy now, they can still read about it. And given the latest machinations by the Trump Administration's Department of Justice (this is only one example, alas) and the enabling Republican Senate, I'd suggest they might want to start with the work of Leonardo Sciascia who, in books like his collection of stories Open Doors, or the novel Equal Danger, reflects on living in a state in which the complicated matter of justice, and even of proper governance itself, is sacrificed to brute assertions of absolute power.