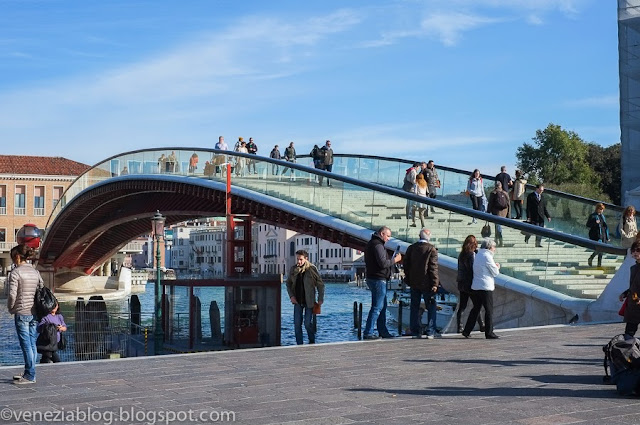 When part of the Biblioteca Marciana collapsed during its construction in 1538 its eminent architect, Jacopo Sansovino, was immediately thrown into jail. A group of his influential friends, Pietro Aretino and Titian among them, managed to get him released on the condition that the architect himself pay for the needed reconstruction.

The problems that have plagued the Spanish architect Santiago Calatrava's Ponte della Costituzione since its long-delayed opening in 2008 over the western end of the Grand Canal haven't resulted yet in its complete collapse--but that doesn't mean that more than a few Venetians wouldn't be happy to see him behind bars. Instead, on November 13 Calatrava will be in a Venice courtroom to defend himself against the city's attempts to recoup 3.8 million euros for which the Veneto's Court of Auditors determined he is partly liable due to "huge errors" in his design and construction of the bridge.

In fact, Calatrava's bridge has been controversial since the day in 1996 that his commission was announced. Critics claimed there was simply no need for a fourth bridge over the Grand Canal in such close proximity to its third, the Ponte degli Scalzi, and that the roughly 4 million euros budgeted for the project could be much better spent elsewhere. As it turned out, by the time the bridge finally opened in 2008 the total bill came to at least three times that amount--and perhaps as much a five.

In a September 24, 2013 article about Calatrava in the New York Times, Suzanne Daley points out that cost overruns aren't unusual for high-profile international "starchitects" such as Calatrava, but the Spaniard is racking up a particularly extensive list of such miscalculations, delays and litigation. In addition to a Dutch councilor in a town near Amsterdam who is urging his colleagues to "take legal action because the three bridges the architect designed for the town cost twice the budgeted amount and then millions more in upkeep since they opened in 2004," Calatrava is already in court in two different regions in Spain over faulty projects. Indeed, Calatrava's errors, overruns, and trials have become so extensive that a blogger has devoted an entire site to keeping track of them.

It's not just that Calatrava's works are expensive to put up, they are also--according to the charges against him in Venice--absurdly expensive to keep from falling down. Carmine Scarano, the Regional Public Prosecutor in the Court of Auditors, is quoted in the March 5, 2013 Corriere del Veneto as saying that Calatrava's Ponte della Costituzione is so badly designed as to be "suffering from a chronic disease." As an English bridge designer explains on his blog The Happy Pontist, "traditional Venetian bridge designs never venture beyond a span to rise ration of 7:1," as any greater ratio--resulting in a long, less humpbacked bridge--would place too much horizontal pressure upon the soft terrain on which the city is built. The long gentle arch of Calatrava's bridge in Venice has a span to rise ration of either 16:1 or 17:1 (depending on one's sources), and the mechanism he designed to compensate for this excessive horizontal thrust has proved inadequate to the task. As a result, constant monitoring of the bridge is required, along with expensive and unending maintenance.

But, you may ask, how does the bridge work on a less technical level? Not very well, I have to say. Though it was specifically put in to provide another, faster route toward the historic center for tourists, it does not do so for everyone--and not without some danger. Five years after the bridge's opening, and ten years after the city council first demanded the architectural plan accommodate them, the bridge remains inaccessible to disabled people. Though a spherical red lift--derisively called "the egg" by locals--was tacked onto the design at great additional cost in 2008, it sits idly upon its track that runs along one side of the bridge, still not operational.

Moreover, while the bridge's low broad steps allude to the shape of steps on early (and much smaller) Venetian bridges, they are spaced so irregularly that stumbles and injuries have been a regular occurrence since its opening. Reports in the world-wide press in late September 2008 noted that no fewer than 10 tourists had sought treatment for twisted ankles and other minor injuries in the first 20 days of the bridge's use. City officials sarcastically responded by simply blaming the tourists, whom they claimed have always been staggered by the city's beauty. But though I've passed over the bridge countless times myself, I still find it requires all of my attention not to mis-step.

In fact, walking on the bridge gets even more challenging when the weather is the least bit inclement. Most of each very wide step consists of glass which, as everyone but Calatrava himself seems to know, becomes slippery in the fog that characterizes a Venetian winter, not to mention in rain or snow. The glass panels, whose pale-green-blue tint already suggests the surface of an ice rink, also freeze quite easily. These weather-related issues have caused such problems at another of Calatrava's glass-paneled footbridges in Bilbao that the city, much to the architect's dismay, carpeted it over to prevent more falls, injuries, and lawsuits.

Finally, and ironically enough, this bridge whose entire raison d'etre is mass tourism, has turned out to be particularly unable to support it, as the wheels of rolling suitcases damage its glass panels. According to a report published last June in La Nuova Venezia, each glass panel must be individually made or repaired in an artisanal process, and there is no ready replacement inventory. At the time of the article, 14 of the steps needed to be replaced, at a cost ranging from 4,000 to 7,000 euros each, depending on the type of damage.

Given all of these problems, I sometimes wonder what the imperious directors of the old Republic of Venice would have done with an architect like Santiago Calatrava in the 16th century. No matter how unpleasant next week's trial may turn out to be for him, he should probably thank his lucky star that it's not taking place four or five hundred years ago. 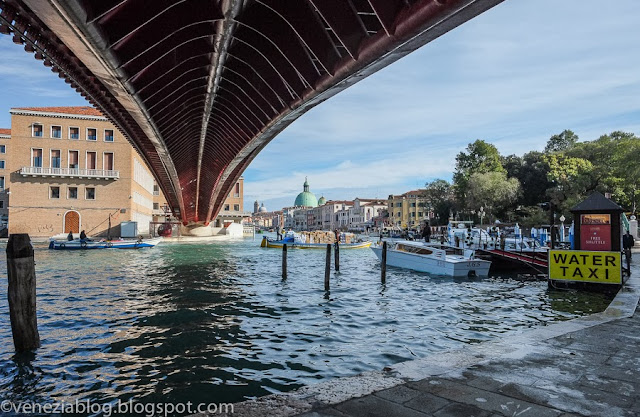 Posted by Steven Varni, aka Sig. Nonloso at 2:41 PM