Sandro and I happened upon the newly re-opened Scuola Grande di San Marco by accident the other day, after stopping in at the hospital to which the scuola provides the most ornamental of facades.

The ground floor grande andito, or entrance hall, of the old scuola and the present-day hospital has always been open to visitors who usually stop in for a look after visiting the nearby church of Santi Giovanni e Paolo. But the space has been cleaned up, and the large wood and glass concierge's office that used to run along part of one side wall has been removed. The concierge now resides in a sleek all-glass fish-tank-like office that spans the width of the front entrance just inside the door, and leaves  the entire grande andito free of anything that might impede one's appreciation of its fine dimensions and array of lovely columns.

Of course, Sandro and I were already familiar with the ground floor; it was the upstairs that blew us away.

Oddly enough I've yet to find out exactly how long the upstairs Sala Capitolare (aka Sala San Marco Biblioteca) had been closed. One retired Venetian I spoke to while we admired the space said it had been "years and years", even decades. Another person I spoke to later in the day, someone who's lived here for over 2 decades, said it had been just a matter of months. I know the latter claim isn't true, as I tried to see it at least a year ago and was told it was closed. But the former also seems to be off, as a 2004 guidebook I have refers to the library's beautiful carved ceiling.

In any case, its reopening was considered significant enough to merit a special civic presentation on the day of the Festa della Madonna della Salute, complete with the deputy mayor, free guided tours and live music. I missed it, but I was happy to just find complete coverage of the festivities, with photos, on the French language blog of Olia i Klod: http://oliaklodvenitiens.wordpress.com/2013/11/23/visite-de-la-scuola-grande-di-san-marco/

One thing I know is that it had to have been closed long enough, or its displays altered greatly enough, to have aroused considerable interest among Venetians, whom for the glorious present seem to be its primary visitors. "Beo!" said the retired man in Venetian while looking at the ceiling, after we'd been speaking in Italian.

Alas, most of the paintings that once decorated the scuola's large Sala Capitolare and its smaller adjoining room, the Sala Dell'Albergo, were dispersed after the fall of the Republic in 1797. The walls of the latter in fact are adorned with beautiful reproductions: of at least one painting that had once certainly belonged to the scuola--of Saint Mark preaching in Alexandria, Egypt by Gentile and Giovanni Bellini that is now in the Galleria Brera in Milan--and of others on the life of Saint Mark. The Sala dell' Albergo I've left for another post, but you can see it on the link to Olia i Klod blog above. 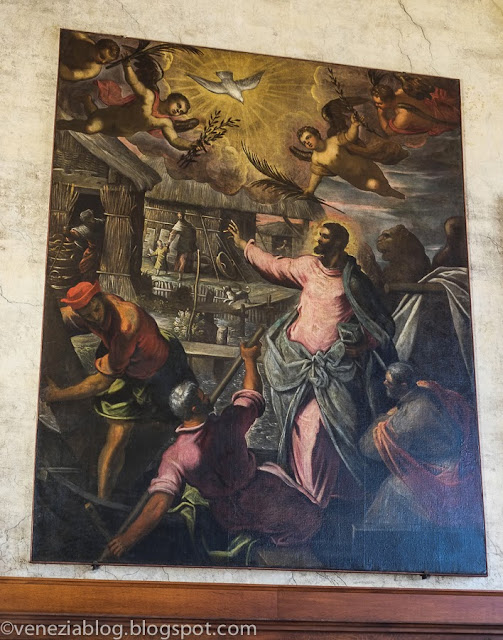 One of the works that is known to have originally hung in the scuola is the above work San Marco che benedice le isole di Venezia by Jacopo and Domenico Tintoretto. This is one of three pieces by Domenico and his famous father now in the scuola in which, according to the informative nicely-produced small guide available onsite (in Italian only), the hand of the son is mostly evident. Now, while being the son of the great Tintoretto could not have been as bad as being his daughters (two of whom were cloistered, as you can read about here: http://www.slowtrav.com/blog/annienc/2010/08/santanna.html), looking at the doughy modeling in the some of the three paintings here I couldn't help but feel a bit for poor Domenico who had no prayer of measuring up to his progenitor.

But paintings, and copies of paintings, and architectural works by Codussi and Sansovino aren't the only things to see in la scuola. For the the space is also devoted to the history of medicine, with early printed medical texts and sometimes frightening early medical instruments, including a couple of illustrations and one unfortunate "specimen" quite likely to give an almost 6-year-old boy nightmares--if he'd seen them.

But Sandro and I kept our eyes focused on more pleasing prospects, of which there are many; some of which you can see below, more of which I'll probably inevitably post in the future, and all of which I'd suggest are worth seeing for oneself. 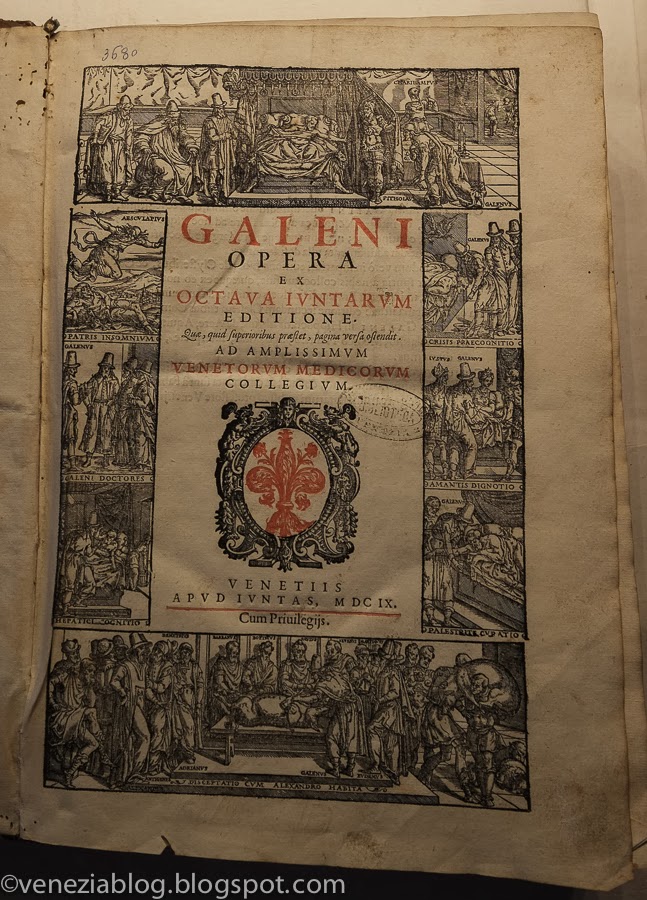 Posted by Steven Varni, aka Sig. Nonloso at 6:38 AM