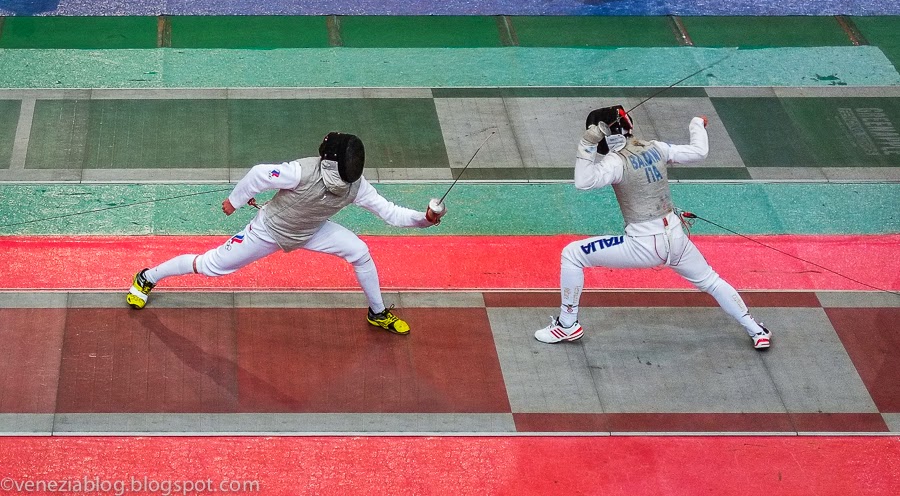 I really didn't think I'd be photographing people in masks again so soon again after the end of Carnevale, but I'd forgotten about this past weekend's 37th Coppa Città di Venezia, an international meet featuring the best male fencers in the world, including all four members of Italy's 2012 Olympic gold-medal-winning team foil crew.

It's a two-day event at Venice's Palasport G. Gianquinto, a short distance from the main Arsenale entrance to the Biennale, and entrance is free to spectators. I fenced a little in college, to satisfy a physical education requirement placed upon first year students, but my knowledge of and ability in the sport can be summed up by the fact that my usual opponent came to class sloppily stoned and I still struggled to beat him. But even if you know even less about it than I do, it's still a great sport to watch in person.

Could I always see the touches? Absolutely not. Were many of the exchanges too fast for me to follow. For sure. And yet the more one watches the better sense one gets of the action, and even with hardly any sense of it at all the drama is unmistakable. At this level of competition the fencers are intensely competitive--as are their coaches. And is there any other sport in the world in which athletes contest judges' or referees' decisions more vehemently or frequently? I can, perhaps, imagine another sport that might be its equal in this regard, but not one that could surpass it. Soccer/football/calcio players seem almost like shrinking violets by comparison, tennis players infinitely agreeable.

After a squeaking out a 15/14 win over Italy's Andrea Cassarà in the final eight stage, China's Jianfei Ma swept to convincing victories against his next two opponents to take first place.

When it comes to photographing masked performers in Venice, I'll take this competition over Carnevale any day. 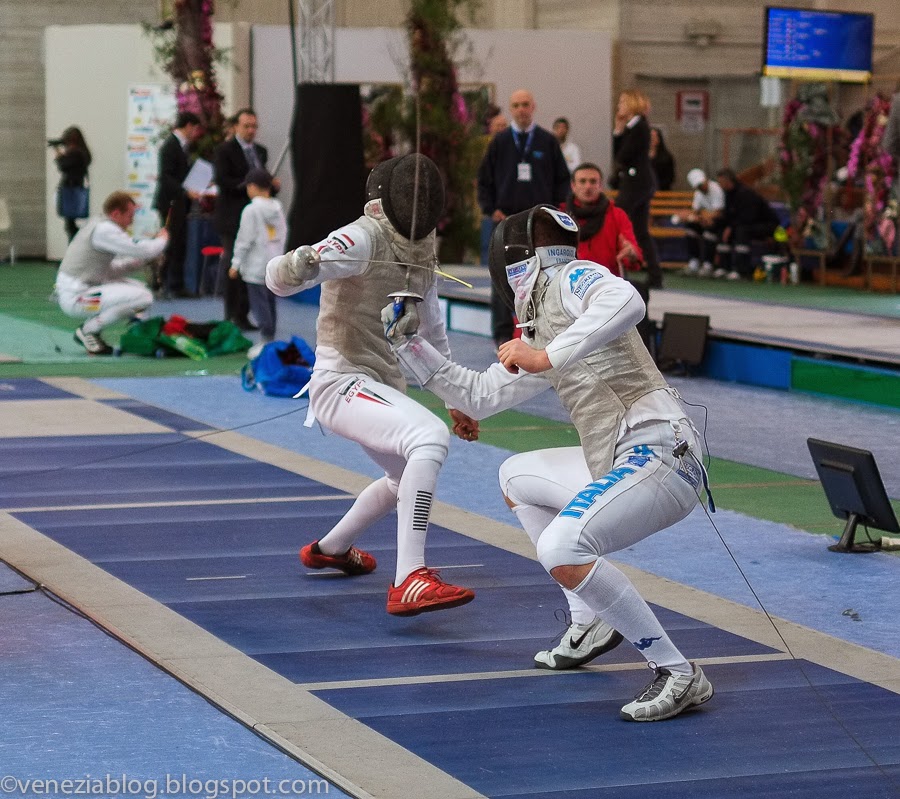 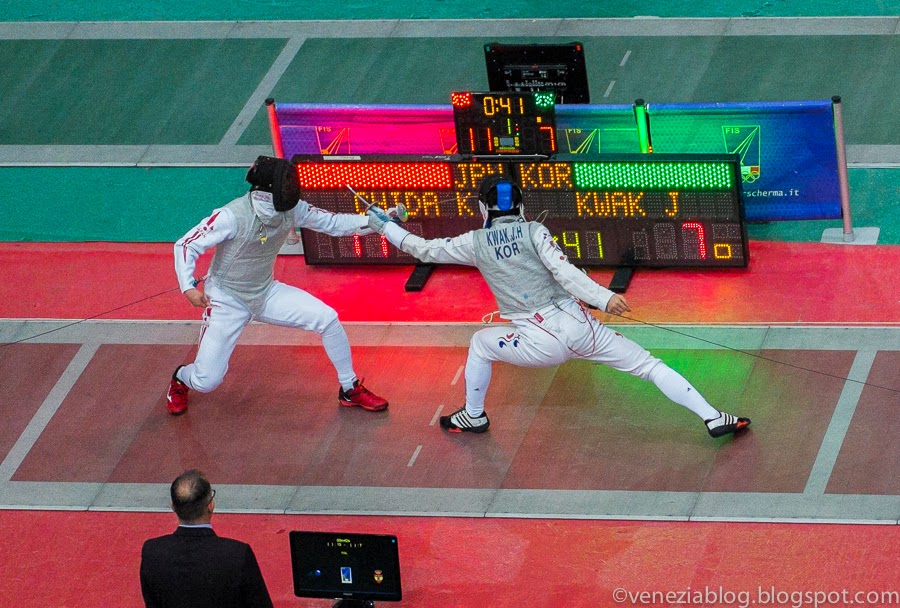 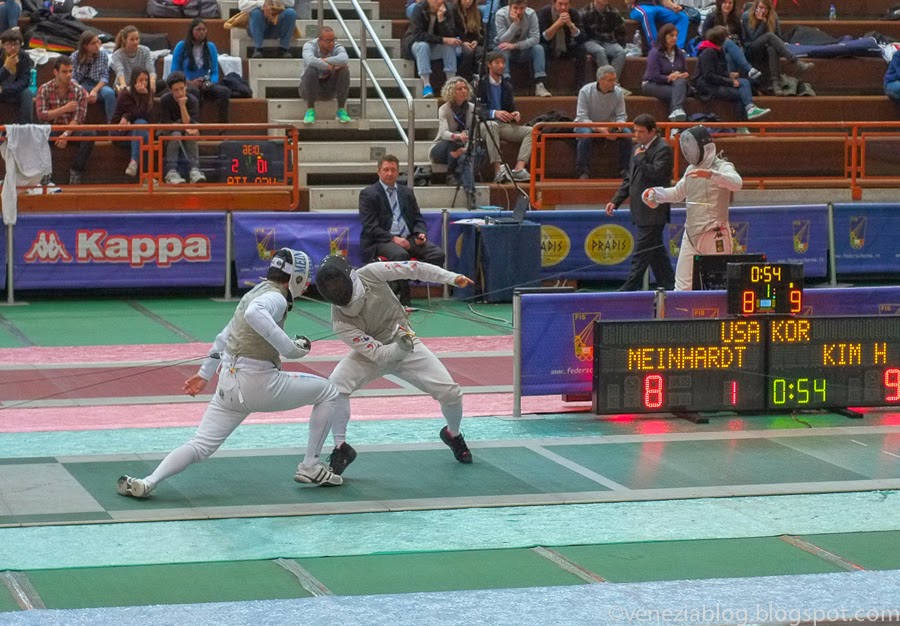 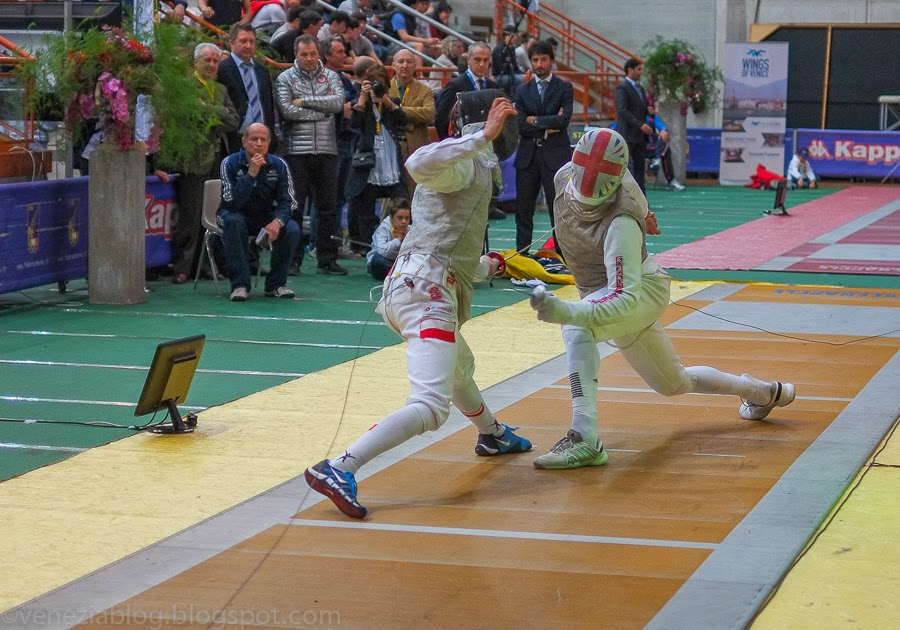 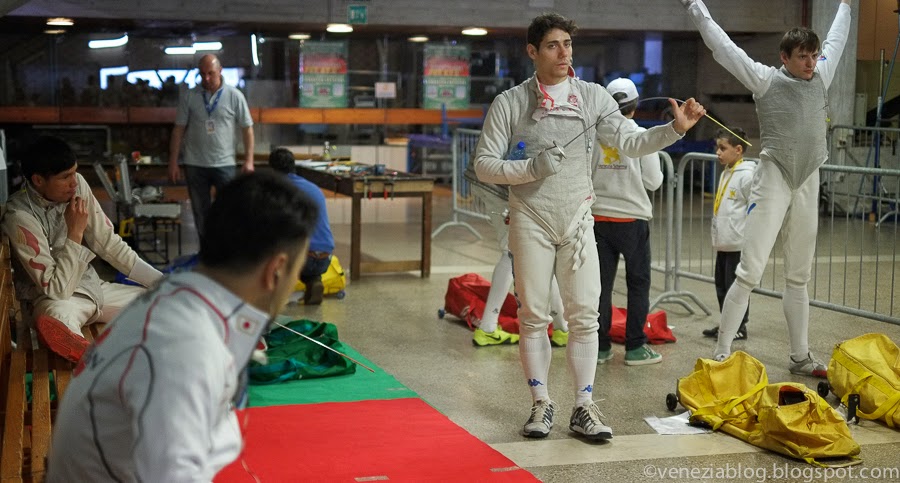 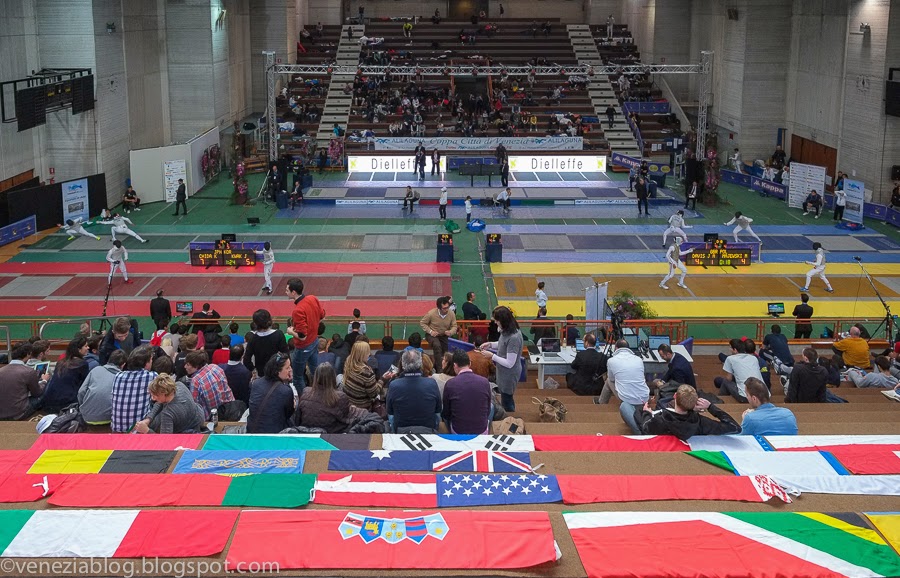 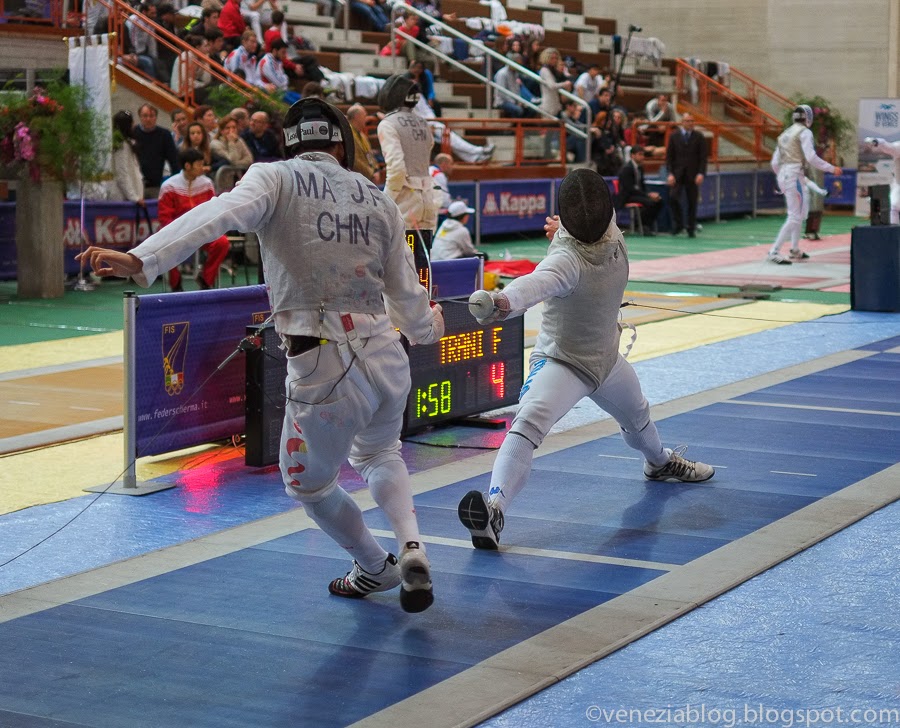 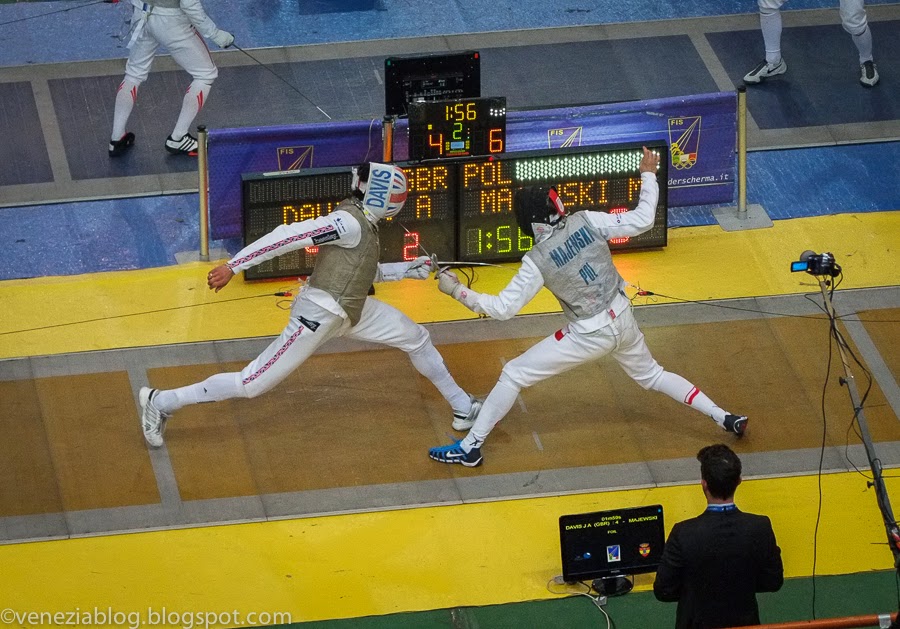 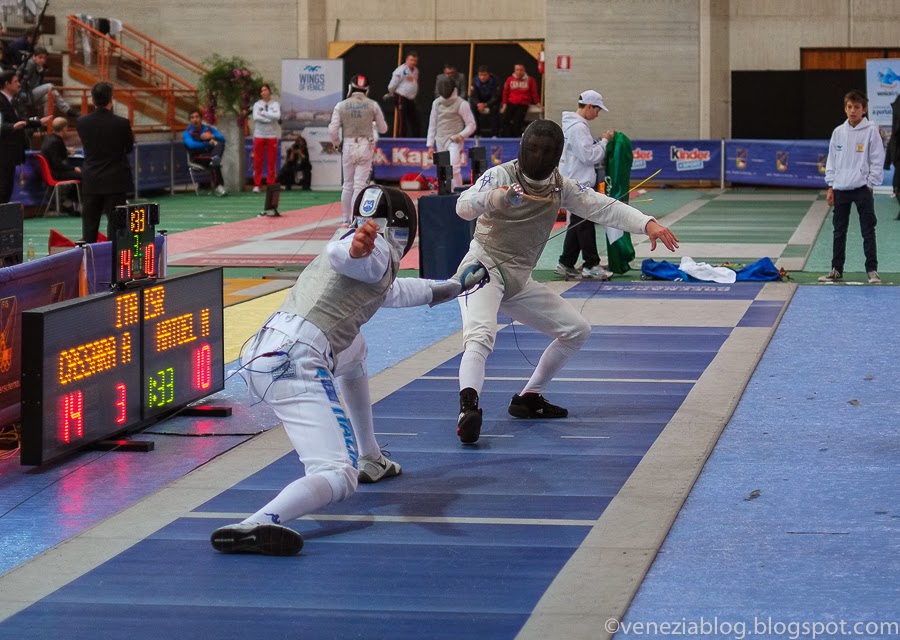 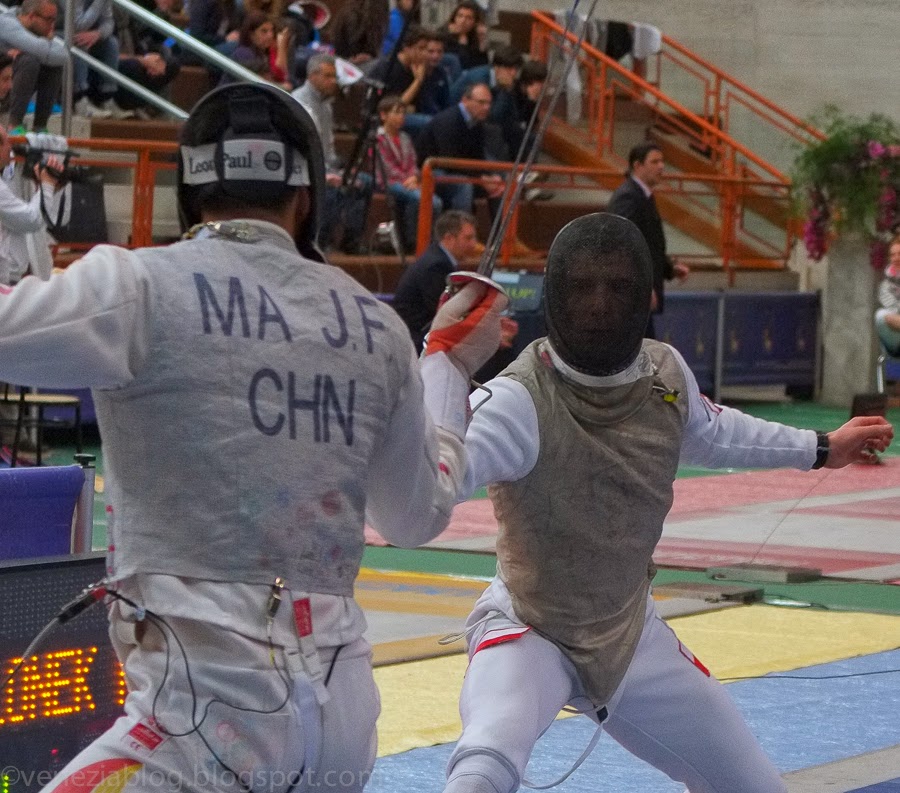 Posted by Steven Varni, aka Sig. Nonloso at 1:15 PM

Email ThisBlogThis!Share to TwitterShare to FacebookShare to Pinterest
Labels: Events in Venice