Teatro Marinoni on Lido: An Introduction 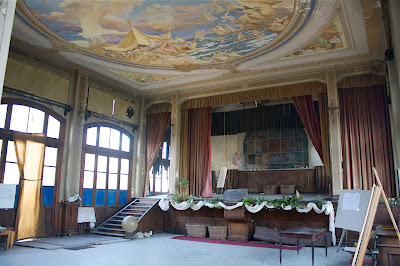 The "introduction" I refer to in the title of this post was my own, as I'm sure some of you reading this already know Teatro Marinoni, and know it better than I do. But hand-printed flyers that I noticed recently appearing around the city suggested that even a lot of native Venetians knew little or maybe nothing about it--and invited them to pay a visit to the place and find out more for themselves.

The official introduction provided by the city of Venice (if it were to provide any introduction at all) would state that Teatro Marinoni is one of many abandoned derelict buildings in the Ospedale al Mare complex near the northeastern end of Lido that was sold in 2010 for 94 million euro to the same company that bought the famous Hotel des Bains (and is in the process of converting it into luxury condos).

What the city would not tell you is that Teatro Marinoni was designated as a gift to the residents of Venice by the man who built it, Mario Marinoni, and as such--argue a growing group of residents--cannot be sold to private developers without violating the terms of Dr Marinoni's bequest.

This group of residents, some of whom have taken to occupying (or "squatting") in the theater, would like to see the theater reborn as the public community cultural space it was originally intended and used as. In fact, they have already began holding cultural events in the space.

As more and more people have began to realize, the immediate peril facing Venice is not environmental or architectural, but demographic and sociological. (See The Venice Report: Demography, Tourism, Financing & Change of Use of Buildings, Cambridge University Press; or Veniceland Atlantis: The Bleak Future of the World's Favorite City by Robert L France: http://www.libripublishing.co.uk/veniceland/index.html).

A recent headline in the local paper announced that the population of the lagoon has now dropped below 59,000 for the first time. The architecture and art of Venice may survive, but is a city without actual residents a city at all? Whatever jobs may eventually become available in the Hotel des Bains luxury condo site will not pay enough for the workers to reside in the lagoon. Nor will any similar luxury development of the Ospedale al Mare complex. As the ex-Thatcherite John Gray pointed out in his 1998 book False Dawn, untrammeled free markets (of the sort that now determines policy in Venice) have consistently undermined the very social institutions--family, career, community--they purport to value.

In any case, that is more than enough for an introduction. For more information I refer you to the website:

And to some few pictures of the theater, present and past, below. I'll try to get more information on this group and its project soon.

Posted by Steven Varni, aka Sig. Nonloso at 7:21 AM