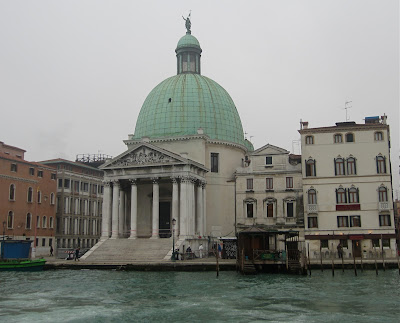 If I remember correctly it was supposed to have been Napoleon who upon his first view of San Simeone Piccolo quipped, "I've seen churches without domes before, but never a dome without a church."

I think the scaffolding was up around the front of this church for so long that it would have been fairly easy to imagine--or hope--that they were finally getting around to building a church more in keeping with the scale of the dome. No such luck, but it's nice to see the church's old odd proportions revealed once more (even if they do make the dome appear, as always, rather unpleasantly pustular), and to have one less giant billboard on the Grand Canal.
Posted by Steven Varni, aka Sig. Nonloso at 12:09 PM