These are the days of the invisible city: the first fog of the autumn has settled in this week.

I overheard someone say, "Imagine if you were only here for a day and all you could see was this fog! What a waste."

Of course it's not like you can see absolutely nothing. Most of this week you have, most of the time, at least a range of a city block--sometimes a little less, sometimes a lot less. But what you definitely lose are the sweeping vistas, the Canaletto views, the palazzi stretching from the Accademia Bridge to Santa Maria della Salute and the Dogana, the basilica of San Marco and the clock tower beyond the Palazzo Ducale as seen from the bacino, and, of course--one of the most famous views of all--San Giorgio Maggiore seen from the molo.

I like to imagine one of the big cruise ships coming into the city under such conditions (though, in reality, they don't); to imagine the crowds lining the upper railing, and the others, mostly in pairs, penned into their private balconies. All of them looking from on high out onto a blank screen of fog, instead of the views they'd been led to expect by the promotional videos and other materials.

Would the operatic Broadway tune that I've heard some of the big ships filling their decks with during such transits help the passengers fill in the vast ghostly blank? With enough saccharine soar and swoop from the loudspeakers could a mass vision of the unseen city be conjured, coerced, dictated?

(In fact, the very last thing I'd want to be subjected to--be literally unable to escape from, short of jumping overboard--as I saw Venice for the first time, would be a soundtrack. Especially one selected by someone else! To have forever after the image of the city and some prerecorded rot linked in my mind.)

In realty, there's still plenty to experience in such conditions: the city reduced to a more intimate scale: chamber music, rather than opera; sketches of graphite or muted pastels instead of canvases.

I imagine one or two people arriving in Venice for just the day from clear sunny Tuscany not to find the city they'd been expecting--the city, in a sense, that they had already seen, even if they'd never been here before--but, instead, something like a game of exquisite corpse awaiting them.

Exquisite corpse (cadavre exquis), also known as picture consequences, was a game invented by the Surrealists in which a number of people draw a single human figure. Each person draws one section of the body, but the drawing paper is folded in such a way that each participant only sees a bare minimum of what the preceding participant has drawn. In my grade school we did a simplified version of this, in which we were given a fragment of an image--say, the torso of a basketball player--and were asked to draw the rest of the body and its surroundings.

Imagine the city of Venice our visitors might piece together from the mere fragments, the patches, that the fog allows them to view.

Visiting Piazza San Marco in particularly heavy fog, when the campanile is reduced to a stump and hardly more than the ground floor of the surrounding buildings is visible, what would prevent them from imagining three or four or more stories atop what's visible of both the Procuratie Nuove and Vecchie and the Ala Napoleonica? Their Piazza would no longer be, then, the "grandest drawing room in Europe," but, rather, tiered all around to a great height: Europe's greatest jewel-box opera house.

The ground-floor columns and arches of the basilica of San Marco might culminate, for all our visitors can see, in pyramidal forms and a forest of standards representing every region ruled by the old Venetian Republic at its most powerful. The base of the the campanile might support the modernist tower that progressive factions advocated for after its complete collapse in 1902. 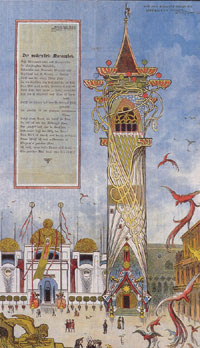 Indeed, as far as our visitors can see, the campanile might actually be in the Austrian Successionist style of Oscar Wagner, whose criticism of the plan to rebuild the collapsed campanile "where it was, as it was" led in 1911 to Wagner's own modern style being satirized by the illustrator F. Graetz in the image at right (from the catalog of an exhibition at the Musei Civici Veneziani: http://www.culturaspettacolovenezia.it/node/7218).
In the fog the skyline of Venice could be, as far as anyone knows, thick with campanili (as medieval Florence was once punctuated by towers), in the most wide-ranging and fanciful styles, built by churches, parishes, and even wealthy individual families. Each of them the product of an aesthetic competition that continued for centuries, and which Pierre Cardin--traditionalist that he is--was merely trying to revive with his overweening tower plans for the nearby mainland (http://www.dezeen.com/2013/07/11/pierre-cardin-cancels-palais-lumiere-skyscraper-venice/).

Taking a ride down the Grand Canal in the fog our two visitors could imagine the obscured roof line of each and every palazzo adorned with the pair of obelisks that signal it once housed an admiral of the mighty Venetian fleet. Venice as the city of admirals!

In other words, Venice in the fog could become for our imaginary pair of day-trippers (or any of us) as malleable an entity as it is for Italo Calvino's Marco Polo in the book Invisible Cities. It could become the starting point for any number of fictions.

Or, to put it another way, our two visitors could get the whole city completely wrong. At least objectively speaking. But in getting it wrong would they experience the city more keenly than those of us who concern ourselves (sometimes excessively) with getting the places we visit right?

Perhaps the more blanks we have to fill in in a city, the more closely we are compelled to look in order to try to decode (or, more likely, imagine) what's going on--because of fog or for whatever reason--perhaps the more we actually notice. And it's not hard to imagine that getting it so wrong might give our two day-trippers more to talk about between themselves than getting it right would.

I suspect that much of the time many of us travel in search of some definitive view of wherever we are visiting. I mean, that's what guided tours and travel books and the bird's-eye overview promised by the big ships bloating through the San Marco bacino promise. But I guess what I'm wondering is whether in the midst (or mist) of foggy disorientation might it be possible to experience more rather than less of Venice?

Posted by Steven Varni, aka Sig. Nonloso at 2:00 PM