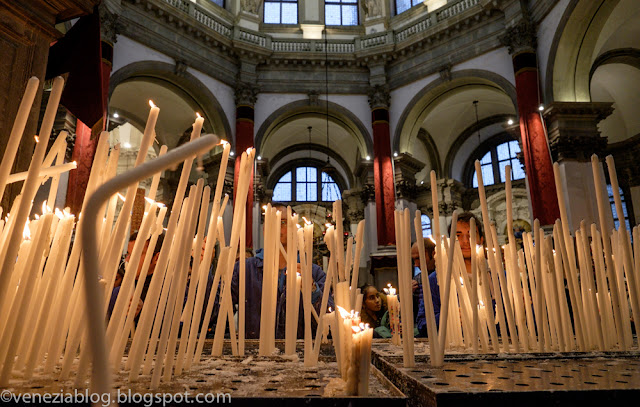 Candles and helium balloons are, respectively, the sacred and profane ritualistic elements of Venice's annual Festa della Madonna della Salute and in past years I sometimes wondered what, if anything, was the connection between the one item lit within the church and the other that bobbed in enormous masses outside it, waiting to be bought by excited kids.

This year the answer (or at least an answer) was revealed: high winds wreak havoc with both of them.

Rain isn't unusual on this feast day, celebrated on 21 November and rivaling the fireworks of the summer's Festa Del Redentore as the city's most important holiday, and I've never known it to diminish the crowds. But the gale-force winds that accompanied this past Saturday's storm were strong enough to keep a good many people from venturing out of the house, even for the purpose of petitioning St Mary for a year's worth of good health. And neither the promise of a balloon nor marzipan (frutta finta, is what Sandro calls it: "fake fruit") could get Sandro, or anyone else, to accompany me.

So it was a low-key affair this year: the balloon sellers forced to crowd their massive clouds of floating merchandise beneath a sottoportego or within the dark entrance hall of a nearby palazzo, the sweet stalls bereft of traffic, and the vast majority of candles on one side of the church blown out almost as soon as they were lit by the wind gusting through the church's open doors.

Nor did I make castradina this year: the ritual dish specific to this holiday whose preparation, like the resurrection, is a three-day process.

So for those interested in finding out just how one goes about preparing the smoked, spiced, sun-dried leg of mutton called castradina or seeing images of the feast celebrated in full force I'd refer you to the links below:

Email ThisBlogThis!Share to TwitterShare to FacebookShare to Pinterest
Labels: Churches in Venice, Events in Venice, Living in Venice