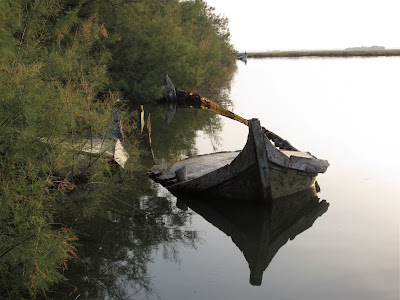 Since the end of its Republic, Venice has been a favorite spot for Romantics (such as Byron and Shelley) and romantics (the rest of us) to contemplate in its famously crumbling palazzi and churches the transience of all glories: of empire brought low and noble families extinguished.

Lately, I've been fascinated by more intimate reminders of transience and the vanished Venetian past: the numerous abandoned boats to be seen rotting into oblivion around the islands of the North Lagoon.

Many of the less-populated islands of the North Lagoon, once the home of fishermen, have in more recent years become quietly popular spots for second homes. Thankfully, these islands have not become mini Sag Harbors: that is, they're nothing like the gaudy trendy plutocratic places that the old fishing villages of New York's Hamptons area have become. Some fishermen still remain, and the second homes of Venetian residents there, from what I've seen, range from the small and simple to the downright rustic. Considering that, to this day, neither electricity nor water are givens on such islands (even for second homes), it's a good place to think about how hard life in the lagoon really was until quite recently.

The abandoned boats, partly or wholly-submerged, quietly slowly going to pieces and being reclaimed by the lagoon, are moody reminders of this. Each one suggests a vanished owner, perhaps a small family, and, most of all, a way of life long gone.

Recently I happened to find myself looking at a number of such boats with a man in his late 60s from Burano, while standing upon a small private weather-beaten old dock that was itself headed in the same direction as the 4 or 5 boats we saw partly afloat or entirely submerged around us. I'd just met him a half hour earlier; he'd told me he was a sculptor and a church organist.

Now he told me that he'd also been in his youth--like most native Buranese of his generation and earlier--a fisherman. He pointed to the rotting caorlina in the photo at top and said that he used to go out fishing on such boats.

A caorlina is a large heavy work boat that you can see being used in the six-person team races of, say, La Regatta Storica each September. I've rowed one at my remiera (rowing club) here. But they didn't use oars 40 years ago, nor motors (as I suggested), but sails, he told me.

"You went out into the Adriatic?" I asked.

"No, not in a boat like that. We stayed in the lagoon. We would stay out for 15 days at a time, going all over the lagoon. Me and one partner. In bad weather, or at night, we would use our sail as cover. We towed a little boat behind us, un battello, with supplies."

I'd recently read that the lagoon was 35 miles long and 7 miles wide at its widest, but still couldn't help but ask, "You didn't come home each night? Or every couple nights?"

In spite of my faltering Italian, he paid me the compliment of imagining that I knew the snatch of song he sang quite beautifully. Of course I didn't. Besides, I still couldn't get over the fact that he and a partner spent 15 days at a time out on the lagoon in an open boat without a motor in what must have been the 1960s.

"Yes. And while we were out fishing for 15 days, our wives were busy at home making us horns," he said, laughing and making the cornetti sign with one hand which, I'm assured, can still get you into a fight in Italy if directed at the wrong person.

He laughed some more, said with a shrug, "I had others myself."

Which is when I understood that those 15-day fishing excursions were probably not entirely without some visits, however brief, to land.

It wasn't until the next day that I began kicking myself for not asking to hear the rest of the song he'd sung a bit of.

I thought of going back to Burano to try to track him down again, but decided, first, to try la pescheria of the Rialto. Which is where I learned the entire thing: the filastrocca, or lullaby, that you see below:

Shoes and socks
Dishes and forks
Doors and balconies
They all smell of fish.

I'm a native Venetian
The son of a fisherman
For fifteen days
We eat el saor.

Freschin is a uniquely Venetian word in that while it does, as a Venetian/Italian dictionary will tell you, refer to the smell of fish (or more generally to other bad odors such as rotten eggs or mould), it more specifically refers to the particular smell of the Venetian lagoon at low tide. Not the smell of the canals at low tide, my Venetian-born neighbor emphasized, but that of the broad lagoon when the low tide leaves its alga or seaweed exposed.

El saor is a dish you can still find in some restaurants in Venice, though its original virtue seemed to be that it was a way of preparing fish so that it would keep for an extended period of time: the 15 days of those fishing voyages. It consists of sardines, onions, and vinegar, according to the fish monger I spoke to at the Rialto. Of Sardines, onions, vinegar and olive oil according to my trusted neighbor, as well as an old Venetian recipe book he showed me.

The recipe book also listed pinoli (pine kernel), uvetta sultanina (raisins) and farina bianca (white flour, for lightly dusting the sardines pre-frying) as other ingredients. My neighbor assures me this dish is marvelous as an antipasto.

That it can now be recommended as merely an antipasto, as opposed to being the primary source of nutrition for two weeks running, is--like those languishing boats--another reminder of how much life in the lagoon has changed in the last half century.

Posted by Steven Varni, aka Sig. Nonloso at 1:48 PM