Yesterday a local paper's headline announced that Venice was being invaded (invadano) by the guests for the George Clooney wedding this weekend, but I get the impression that the number of paparazzi, press and bodyguards (of which one paper claims no less than 400 were hired) outnumber the invitees.

The four days of private festivities begin this evening, according to reports, and continue through Monday. You need only google "George Clooney wedding" to have your choice of numerous accounts in every tongue so I won't repeat any details here. Venetians themselves seem amused by the elaborateness of the celebration. Jen told me that our husband and wife pair of butchers around the corner talked of nothing else this evening when she stopped in to pick up dinner, finding the subject so diverting that they even slipped into Venetian, so that their jokes were lost on her.

I saw one newspaper claim that there would be fireworks tomorrow night, as if it were a public festival (though it most certainly is not). You'd almost think Catherine Cornaro was about to hand over her queenship of Cyprus to the old 15th-century Venetian Republic. Or that the the bride and groom are scheduled to be carried on high around the Piazza after their nuptials, as the newly-elected doges once were, tossing gold coins to the clamoring masses.

Yet for all the publicity, and the procession of some sort on Monday that will close part of the Grand Canal for two hours at mid-day, this is supposed to be a very private affair. Images of the newlyweds and their guests are at a premium. As the couple has sold exclusive rights to photograph the celebration to one magazine, both guests and hired help will be forbidden to snap away with cell phones.

But that doesn't mean that photographers won't be lurking--and floating--in wait, as we discovered today just after noon in the course of taking a long way home from Sandro's school in our boat. From a distance the few small open boats appeared to be simply the usual fishermen you see around the lagoon on pretty much any afternoon. But these boats idled a short distance from the Hotel Ciprianni, where George Clooney and his more celebrated friends are said to be lodging, and the men in the fishing boats had telephoto lenses almost as long as their arms (as you can see in the top image) rather than poles.

The Clooney wedding isn't the only thing going on in Venice this weekend, though, and for those not invited to it (and even for those who are and who might find themselves with a bit of free time) the Isole in Rete festival, celebrating the culture, history and food of the various lagoon communities (from Altino and Mestre on the mainland to such islands as Burano, Certosa, San Giacomo in Paludo and more) is worth checking out. Information can be found here: http://isoleinrete2014.wordpress.com/ 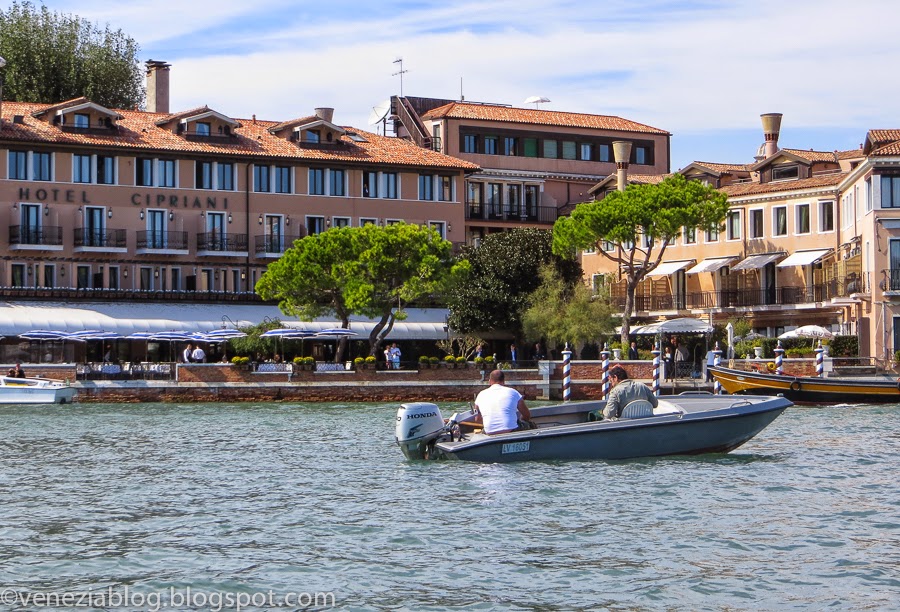 Posted by Steven Varni, aka Sig. Nonloso at 9:18 PM