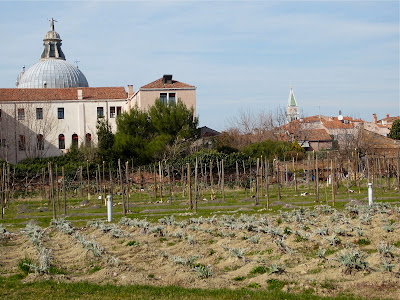 Guidebooks tell us that in the days of the Republic the island of Giudecca used to be renowned for its private gardens: the enclosed pleasure grounds of those trouble-making aristocrats who were banished there because of their anti-government inclinations. A couple of months ago I met a woman who is supposed to own the best (and perhaps last) private garden still in existence on Giudecca. I hope to get a chance to see (and photograph) it this Spring. But two days ago Jen, Sandro and I visited a Giudecca garden of a decidedly more democratic bent than those old ones of the vanished Republic.

Set behind the Church of the Zitelle, beside the Hotel Cipriani, this community garden, a Spiazzi Verdi project of a group devoted to permaculture (or sustainable organic agriculture), covers about 1 hectare (or 2.5 acres) of land within a large enclosed plot it shares with a casa di riposo (or rest home). As you can see in the photo above, it has a large plot of artichokes, a vineyard, a few fruit trees, and (less visible) another large plot of land given over to vegetables of every sort. 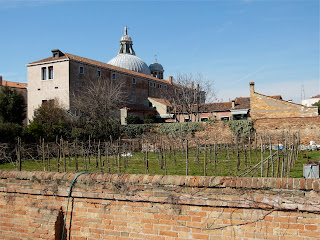 On the other side of a brick wall, there is a second plot of grapes, in an area long-used for their cultivation (at right). There is also a third vineyard, also long used for the cultivation of grapes, on the cemetery island of San Michele, and a very old cantina where, as monks did for centuries, the group makes wine from the fruit of their vineyards. [Insert your own joke about Wine and Spirits here.]
We only found out about this garden last Saturday, when Sandro and I chanced into a conversation with its director and his 4-year-old son at La Serra, the one-time greenhouse for the Giardini Pubblici alongside Viale Garibaldi, which over the last year has become one of the liveliest and most interesting places in Castello. La Serra is not only a lovely tall sunny space, filled with plants for sale and a nice cafe, it hosts a wide variety of events: from water color and yoga classes for adults, to paper-making workshops for kids, fencing exhibitions, and educational projects about the ecosystem of the lagoon. Some of the seedlings sold in La Serra got their start at the community garden on Giudecca. 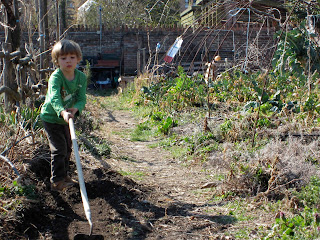 The next day Sandro, Jen and I went to work at the garden. Sunday is the usual day for people to work there, though other days are also possible. Anyone can work and, in return for their labor, share in what the garden produces. In a place so unrelentingly urban as Venice, in which it's possible to stroll for an hour without seeing a tree, it's a marvelous thing to dig in the dirt. One of the main thrusts of the garden is educational: it hosts workshops for Venetian school children. And Sandro enjoyed hoeing and shoveling and running around so much that he didn't want to leave.

It wasn't an especially good day to take photos: the sun was high and bright, and the garden was in its winter guise, much of it dead or, like the grape vines, pruned bare. But some beautiful photos and a really well-shot video of the garden in summer, along with much more information about it, can be found here: 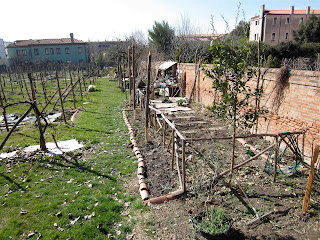 For a very long time it's been easy and even fashionable for some people to be dismissive of Venice: a certain kind of male English writer in particular seems inclined to dismiss the city as merely, at worst, a tourist trap, at best, a museum. Geoff Dyer, for example, repeats the cliche about the inauthentic nature of the city's inhabitants, as if they all are merely playing at life on one big stage set. (Couldn't the same thing be said about Manhattanites, by the way?). Such writers pride themselves on being knowing, or in the know, seeing through the appearances that take in the rest of us. But in seeing through things, I wonder if they ever actually see anything at all aside from their own defenses, abstractions, or projections. It doesn't help, by the way, that many of the people who are most dismissive of the city speak no Italian at all. For such people as these the city largely remains a closed book, which they take great pride in judging by its cover.

But against all odds, there is plenty of life in Venice still, resisting the push to commercialize every square inch of it to death. In scattered sometimes hidden places, there are growing things--available to those who have or make the time to look and see.

Posted by Steven Varni, aka Sig. Nonloso at 7:09 AM