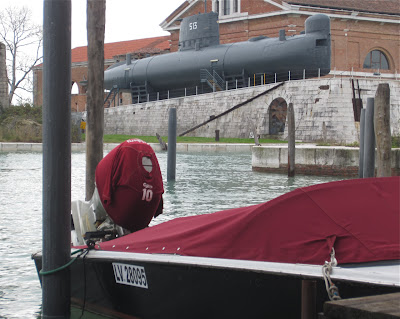 If you pay much attention to the smaller private motorboats of Venice--or if, like me, you have your attention directed toward such motor boats on a regular basis by a very interested family member (my son, in my case)--you can't help but notice that a lot of the outboard motors go about casually clothed. In ill-fitting T-shirts, usually, as for example, in the photo above. Though I've also seen one in the Canareggio canal wearing a Lazio soccer jersey.

About a year ago I read an explanation of this phenomenon on a blog, but it wasn't very convincing. In fact, even the author of the blog seemed skeptical of his source, who told him that boat owners dressed up their motors in this way to deter theft. If I remember correctly, the blogger wondered understandably enough how much obstacle a thin T-shirt would present to someone who, according to his source, was intent on opening up the outer shell of a motor to remove some valuable part from inside.

Recently, in the course of a jouncing heaving ride home from my son's school, I asked the Venetian father of one of Sandro's classmates about the T-shirt worn by the outboard motor on his own small craft. He offered three explanations:

1. Its purpose is to protect the motor from scratches and the elements.

He offered this explanation as we were just getting underway on our trip homeward, with the kind of vaguely embarrassed smile that suggested to me that he himself seriously doubted its validity. He explained it as an agnostic might explain a minor act of faith in which he essentially had no belief but continued to perform out of habit--just in case it might somehow, magically, offer some benefit.

Perhaps because I looked as unconvinced as he himself, he offered a second:

But not in the sense of acting as an obstacle to anyone wishing to open the casing of the motor, but in the simpler sense of concealing the make and size of the motor. Thieves, he said, had particular types of motors they were looking for. They also, understandably enough, did not have the luxury of perusing their potential targets at leisure. The T-shirt prevented the thieves from seeing at a glance--as, for example, they cruised past in their own boat--if the motor on this or that moored boat was what they were looking for.

Now we were well underway on our trip, in the broad busy canal running alongside the Fondamente Nove and my interlocutor could really open it up here, in spite of the traffic and its countless wakes, and he did--much to the delight of our sons, who roared and guffawed as spray flew and so did we.

He then offered a third explanation, entirely in keeping with the piratical spirit of the moment:

3. It is to prevent police from identifying the boat.

The T-shirt conceals all identifying marks on the motor--model, horsepower and anything else printed by the manufacturer--and this, he said, makes it harder for the authorities responsible for enforcing speed limits in the the lagoon to ticket you for exceeding them.

He immediately added, as if to forestall any possible disapproval,"And it's not even legal the way they catch you!"

They use radar guns, he explained, which are forbidden to be used outside of zones where their use is clearly posted. But they break the law and use them everywhere in the lagoon, wherever they want. They take a photo of the speeding boat and then one day its owner, with no warning, finds a ticket and a fine waiting for him in his mailbox at home.

But obviously, I objected, they're identifying the boat by the license number each boat is required to wear on its side, not by the type of motor.

Yes, yes, he conceded, but sometimes that license number doesn't show up so clearly in the photo, and if that's the only thing they have to go on (because you've concealed all identifying marks on your motor), you can argue that the boat is not yours at all, that they've made a mistake, and get out of the ticket.

I found it hard to believe you'd get very far with what seemed to me like a pretty lame argument, but he looked so pleased with the idea of its success that I said nothing. After all, what do I know about the Italian legal system, aside from the highest profile cases in which people clearly convicted of the most serious crimes--for example, former Social Democrat Prime Minister Andreotti--escape their penalty because the statute of limitations has conveniently expired?

Besides, he added, if the cops are breaking the law, using radar when they're not supposed to, then we have to do whatever we can to try to get an even break.

And my source--who was no sly pompous gondolier or taxi driver (professions notorious in Venice for skirting the law), but a slender soft-spoken 30-something Venetian who'd spent years in India studying Tantra--smiled with a certain boyish air of helpless innocence, and I found it impossible to offer another objection or say anything else that might undermine his tenuous, perhaps far-fetched, but persistent faith in his own ingenuity, which in the tricky seas of Italy (and elsewhere) is sometimes the only thing that keeps any of us afloat.