If you've taken a gondola ride in Venice in the last few years it's quite possible that one of the city's most knowledgeable guides to its streets and canals may have been dozing, unbeknownst to you, beneath your brocaded seat. And if he happened to pass by you later in the day as you puzzled over a map of this famously maze-like city, you'd certainly never think to ask him for help. For one thing, he's easy to miss, as he stands about knee-high to the average adult and weighs hardly more than 10 pounds. And for another, he's a black mixed-breed dog named Sandro.

Nor would you ever think if you saw him on a vaporetto that he could advise you as to exactly which stop you should get off at in order to reach a particular destination. But if you were fluent in the language of dogs he most certainly could, as he is known among Venetians for taking vaporetti around town by himself.

Sandro belongs to a Venetian gondolier, Nicola Grossi, and accompanies him to work near the Rialto. But loyal as Sandro is, he was never much inclined to spend his entire day in a gondola. And Nicola, well aware of Sandro's excellent sense of direction, says he "never felt any need to insist he stay near me all the time. He's always been a free spirit."

Then Nicola recounts a telephone call he received years ago from the commandante of a vaporetto.  "Excuse me," the commandante said, "but I have a dog here on board with me. I found your number on his collar. Did you lose him?"

Unconvinced, the commandante continued, "Well, he got on board at the Ca' Rezzonico stop."

"Okay, that's fine," Nicola replied. "Really, you don't need to worry about him. Where are you now?"

"We're at the Accademia. We're heading toward San Marco."

"Great. He's sure to get off at the next stop, Santa Maria del Giglio."

And when the vaporetto arrived at Santa Maria del Giglio, the commandante, who'd stayed on the line, said, "Ah, yes, yes, you're right, he's getting off now."

Nicola explains to me, "You see, he was going to Campo Santo Stefano, where my mother lived at that time."

A short time later, Nicola's mother called him. "Sandro just showed up," she said. "Since it's noon, should I give him something to eat?"

"I told her, yes, of course," Nicola says. "Then, when he was done eating he went to the door of her apartment to show he was ready to leave. She let him out and he returned to the Rialto, to my gondola. I was at home for my own lunch. My colleagues called to tell me he'd just shown up there and asked what they should do with him. I told them to just let him be. And a little while after that he arrived home."


Nicola's and Sandro's life together goes back more than a decade. Nicola adopted Sandro when he was three years old from a friend who knew very little about animals and paid minimal attention to him. Having spent his first years with neither a pack nor a master, Sandro was a rather odd dog, distrustful and unfriendly. But Nicola immediately saw how smart he was, and that he could take him out on Lido without a collar or leash, as Sandro was aware of everything around him and kept well clear of traffic.

Nicola lived and worked on Lido at that time and rode his bike to his job in a store or to do the shopping. Sandro always followed behind him. At a certain point he began to accompany Nicola to his job, then head off on his own adventures.

"Lido isn't a small island," Nicola says, "it's 15 kilometers long. But Sandro learned his way all around it. He always had a great sense of orientation. He'd spend the day exploring and then, without fail, five or ten minutes before I was due to get off, he'd show up outside the store where I worked and wait for me."

When Nicola changed jobs and moved to Venice proper Sandro quickly began to learn his way around the whole of the historic city. First on foot, then, after riding with Nicola in his small motor boat and gondola, from the water. "In this way," Nicola says, "he came to have a complete vision of the city."

Some time later Sandro's internal map of the world was expanded to include the island of the Giudecca, after Nicola's mother moved there. "I'd go to visit her," Nicola says, "and he'd come along. Sometimes I'd take my own boat, sometimes I'd take the vaporetto, and we'd walk all around the island. Then he began to make these trips himself while I was working, always getting off the vaporetto at the Redentore stop, as it's closest to her house. I had two jobs then, and if he got bored he'd take off."

"I used to start work very early in the morning in those days. After we arrived at the gondola together Sandro would set off on his own and in a little while I'd start to get calls from all the people I knew around town. Someone would call and say, I just saw your dog in Campo Santo Stefano. After a half hour, somebody else would call to tell me she just saw him in San Polo. An hour after that, another friend would call to say he saw him on Giudecca. Sandro took the vaporetto and went to one of the various places he knew, my mother's, my brother's, my sister's. I'm the youngest of eight kids, so he had a lot of options. When I finished work I'd find him waiting for me where we began the day, or already at home. He'd sit beneath our apartment and bark."

There were other times that Nicola would set out in the gondola with clients, thinking that Sandro was asleep in his comfortable den beneath the main passenger seat or the gondolier's box. Sandro, however, would have actually gotten off the boat before Nicola departed. If Sandro then returned to the mooring while Nicola was still out he would set off along the route that he knew Nicola made in his gondola.

Now, it's important to know that each gondola in Venice that departs from a particular gondola station--for example, one of those near the Rialto or San Marco--follows a set route. Nicola has always rotated from one day to the next between various stations, which meant that Sandro, as well as his master, had to learn various routes. And learn them not only by water, as Nicola did, but also--and this is far more difficult--how to negotiate the same route on foot via the city's convoluted tangle of alleys.

But this is exactly what Sandro did learn, and for each different gondola station. For at some point as Nicola rowed his clients along one or the other of his routes, he would find Sandro waiting for him on a fondamenta (canal side), ready to rejoin him on the gondola.


"I've never worried about him when he takes off," Nicola says. "He never roams for too long, and he can always find his way back home. There's been only one exception, when was gone for two days. But that was because he was in love. He'd fallen for a little dog who lived on Lido and for two days he sat in front of her door. He just couldn't tear himself away. The owners of the house noticed him sitting out there and called me. By the time I arrived to get him in Lido he'd given up and left, and I found him waiting for me back home."

Nicola chuckles at the memory of this and says with obvious admiration, "It was a great love affair, though we might say it was never concluded, as he never had any contact with her. But he courted his girl, his beloved, for two days non-stop outside her door."

As Sandro approaches his 14th birthday on January 8, Nicola says he's not the fearless explorer, nor passionate suitor, he once was. He's started to get cataracts, and he's become Nicola's shadow as he never was before, seeming a little anxious if Nicola is not in sight. He's not so keen to roam on his own these days. But if he and Nicola are separated he will wait at some point where he knows Nicola is likely to pass by, and if he gets bored of waiting there, will simply return straight home. "He can always find his way home. And, fortunately, his sense of smell is still excellent. He depends upon it now more than ever."

"He had to have surgery on a little problem a while back," Nicola says, "and he has various little issues, but, fortunately, I know him well enough now that I can keep things under control. I massage him and I can feel what's bothering him."

Sandro now spends more time with Nicola in the gondola than he ever did before. I imagine him there tucked away beneath the seat, "an incomparable cosmographer", as was said of the famous 15th-century Venetian mapmaker Fra Mauro, who spent his own later years tucked away in the Camaldolese monastery of San Michele (on what is now the cemetery island). And it's not impossible to imagine those experiences Sandro may carry with him still of the ancient city's waterways, its towering edifices, its countless scents of both sea and land, the infinite textures of its paving stones, its shadowy crevices, its marble and moss and mold. Of the city's pigeons and rats and psychotic gulls. Of the torrents of feet, rushing and eddying, and of the rubber-wheeled delivery carts that splash suddenly through them, or the clattering suitcases impeding the flow. Of the roar of a vaporetto reversing its engines into the floating fermata (stop), then the great dangerous thump likely to jolt a small dog into the water. Of all his old regular rounds, his favorite haunts--reliable places to get a full meal, others for a quick scrap or two. And always, happily, at the end of the day, Nicola's wife Carlotta and young son Zaccaria at the home they all share.

Rocked gently through side canals, the plash of the oar to one side, the soothing gurgle of the gondola's flat bottom moving through the water just below, Nicola navigating just overhead, warm and secure on his blankets, Sandro dreams his own canine Book of the Marvels of the World.


***For a short video of Sandro and Nicola, click on this link to the following post: http://veneziablog.blogspot.it/2016/01/a-dog-about-town-short-video-on-venices.html 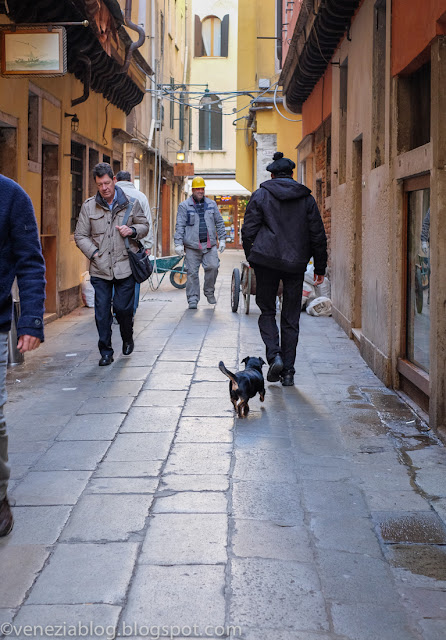 Posted by Steven Varni, aka Sig. Nonloso at 5:23 PM

Email ThisBlogThis!Share to TwitterShare to FacebookShare to Pinterest
Labels: A Dog's Life in Venice, Living in Venice