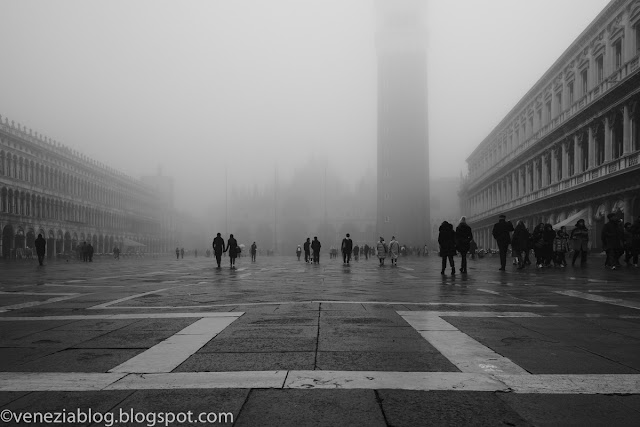 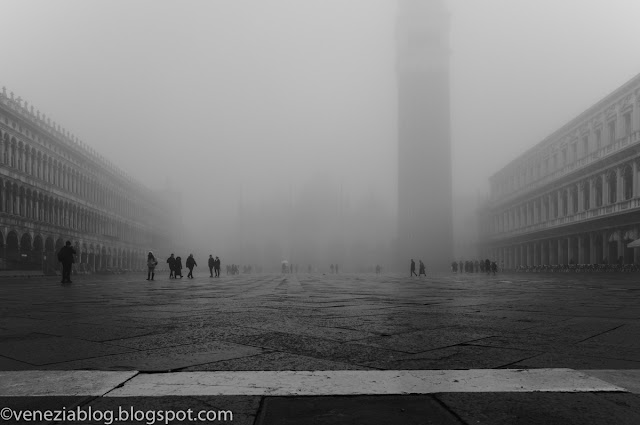 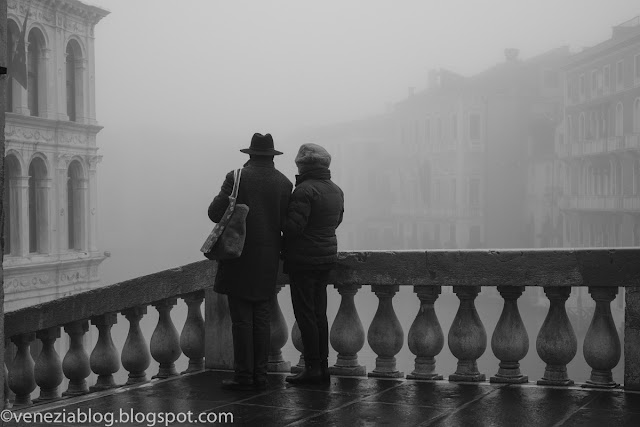 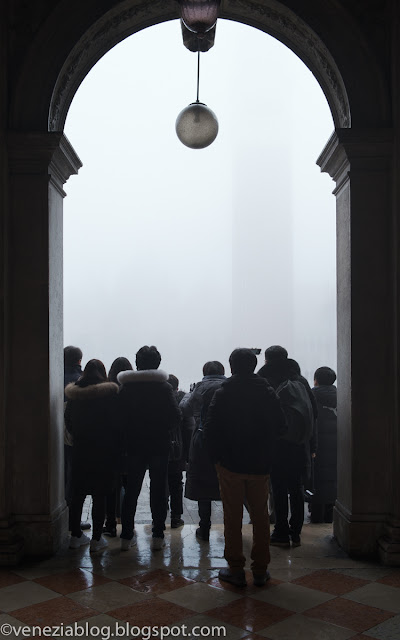 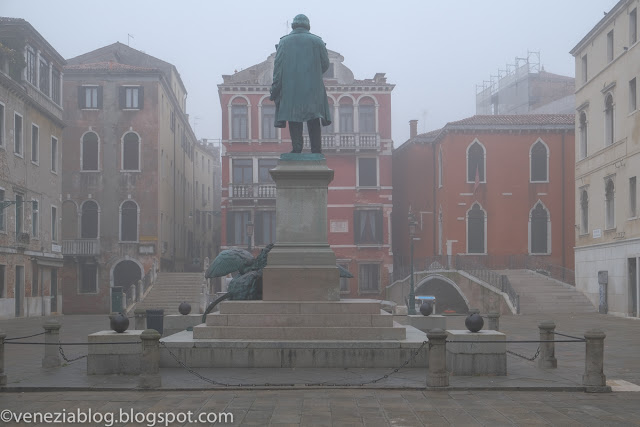 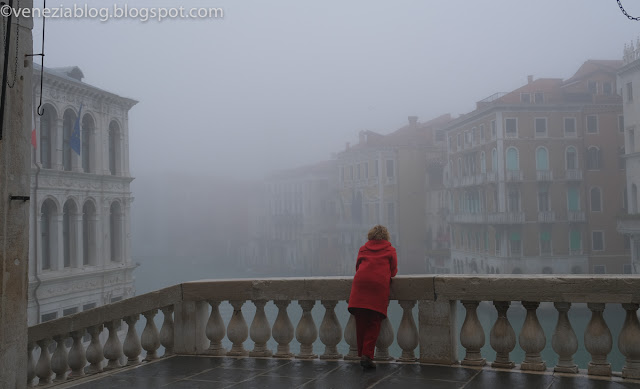 All Is Calm, All Is White: This Morning 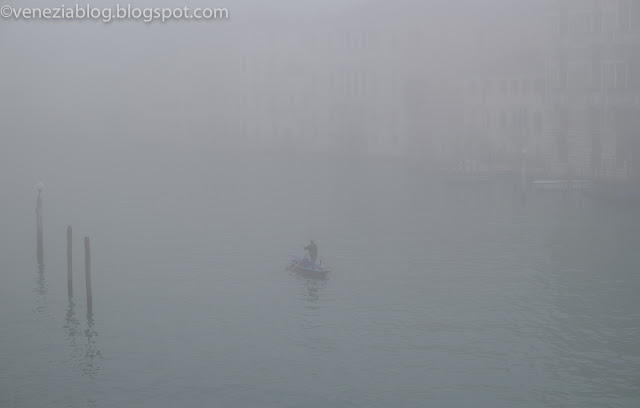 A rower takes advantage of the holiday, and the interrupted vaporetto service caused by the fog, to have the Grand Canal almost entirely to himself this morning.

Email ThisBlogThis!Share to TwitterShare to FacebookShare to Pinterest
Labels: Christmas in Venice 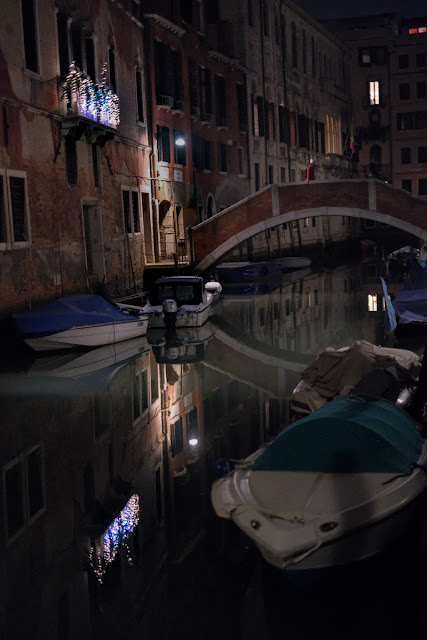 I was admiring the lighted balcony of a palazzo and its reflection in Rio San Servero last night, not a soul in sight, when the red coated figure in the image above appeared on the bridge of Calle di Mezzo, just down the canal from Palazzo Grimani (its lighted windows and Italian flag visible in the background). Those familiar with Nicolas Roeg's unsettling Venice 1973 film Don't Look Now, in whose climax this same calle and palazzo figure prominently, will not be surprised to learn that I made sure not to follow her.

For those who haven't watched the film--well, in spite of the central role played by a red cloak in the plot, it's not a Christmas movie, but worth watching anyway for its setting of a grimy workaday Venice that's markedly different from the spiffy one we're used to today.

Another less-known film from the same era, which shows even more of the still-living city than Roeg's, is the 1970 melodrama Anonimo Veneziano (The Anonymous Venetian), directed by Enrico Maria Salerno. It's not a great, nor even a good movie: it's maudlin in the same way that I imagine another film released in 1970 must be: Love Story. 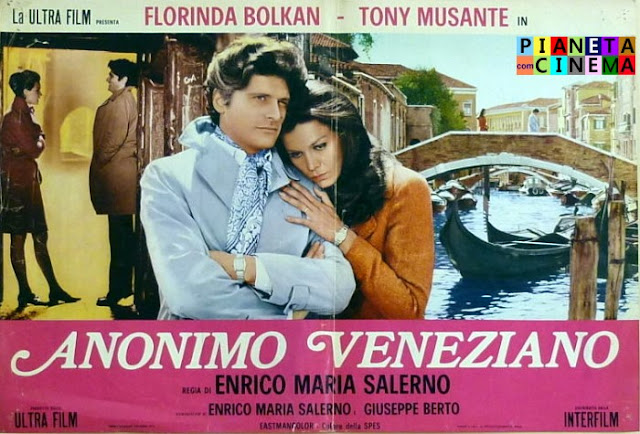 But the real love story in Anonimo Veneziano takes place between the film's cinematographer and the city itself. Like Roeg's film, this one is also a winter's tale, set in the off-season Venice of Venetians (back in the day when there still was one and still were some, respectively) and the unhappy pair of lovers go everywhere in the city, and in every possible way: on foot, on vaporetto, traghetto, and in gondola.

You don't need to know a word of Italian to watch this film, as it's not the words that make it worth watching. The two leads are photogenic and may even be fine actors (I didn't notice), and they certainly model the era's fashions marvelously, but their real function is to serve as what Michelangelo Antonioni called "moving space."* That is--in a reversal of the usual relationship between a film's stars and its setting--to occupy the foreground in a way that sets off the background to its best advantage.

For any lover of Venice I'm tempted to say this film, unremarkable as it may be as a film, is something of a must-see (though I've never seen it included in any list of Venice films to watch). And those who have access to RAI Play online** can watch it for free: https://www.raiplay.it/video/2017/11/Anonimo-Veneziano-cc2fb89f-6184-4786-90f6-70389e00fada.html

(A google search turned up an informative Youtube video of some of the locations of the film. Though, as there's a certain pleasure in trying to recognize the many locations--both exterior and interior--as one watches the film, to watch this 8 minute video before watching the film may be like looking at the answers to a crossword puzzle in advance of doing it.) 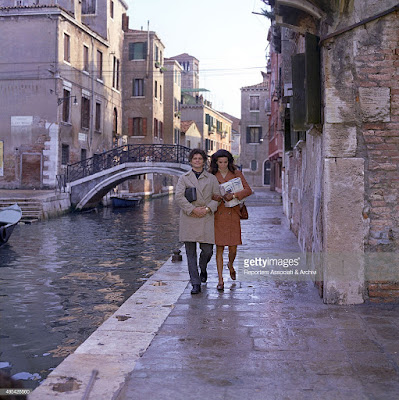 *According to Jack Nicholson, who starred in Antonioni's 1975 film The Passenger, Antonioni responded to the actor's questions about his own performance by assuring him that it was fine, before admitting that "for me, the actor is a moving space."

**In Italy one can sign up for RAI Play free of charge, gaining access to a vast array of streaming programs and films. I don't, however, know of its availability in other countries.

Off the Beaten Track 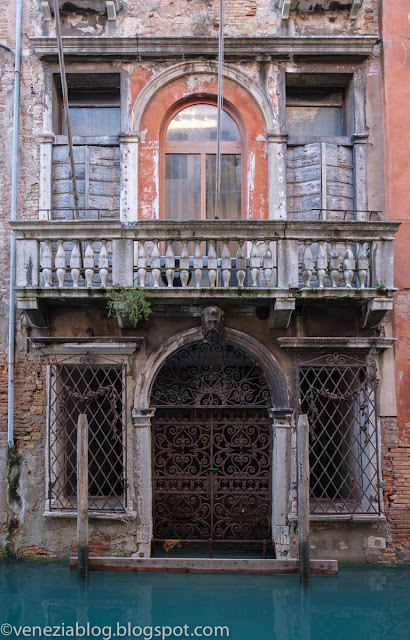 "I've never seen that palazzo," my wife declared when I showed her the two images posted here, and I replied that she never will, unless she comes with our son and I the next time we take a boat ride through certain rii in the historic center.

For this is one of those facades whose splendor--weathered enchantingly by time and tide, and almost impossible to capture, even with a wide angle lens--glimmers upon a narrow high-walled canal, completely out of sight of any foot traffic.

It is quite literally off the beaten track, as that phrase refers to a path pounded smooth by pedestrians, and it's doubtful that anyone's ever been able to stump past this facade.

I think there is a gondola route that passes by this place but, based upon years of casual observation, it seems a good many passengers on gondole would be too absorbed in taking selfies to notice it, as the narrowness of the canal means that even motoring or rowing at the slowest rate you come upon it suddenly--and just as suddenly it's out of sight. You really need to be watching for it.

To get even these two images required the aid of a skilled 10-year-old boat driver, who kept our sandolo-sanpierota idling in place against the wall opposite this facade, while I stood upon the highest point of our low boat, stretched the camera as far above my head as I could reach (to minimize converging vertical lines) and snapped.

Whenever I think of posting an image like this, one visible only from a boat, I think of those who will take it as evidence of the need for kayak rentals or kayak tours in the historic center, so that such views can be open to everyone.

But whoever said that every part of any city--even every public part of every city--should be readily available to all?

After all, it's not like Venice is lacking for sights readily seen on foot, is it?

In his preface to A Portrait of a Lady, which he completed while staying in a pensione on the Riva degli Schiavoni, Henry James wrote how the sight of Venice outside his window was always calling him away from his work: that Venice was one of those places that simply refused to remain merely background.

But James was writing this preface over 100 years ago, and recalling a period of composition from two decades before that. Much has changed: the selfie stick--and the mindset from which it sprang, and which it now exacerbates--can reduce even a Leonardo or Michelangelo to stage set or prop. It's too bad, as it really is hard to go anywhere in Venice without finding some place or scene more than worthy of attention. The city bristles with what James would have called subjects: they fall at your feet, they fall into your lap, they fall upon you hard like hail. Or maybe that's the way to describe objects of attention.

Subjects perhaps, in contrast, don't so much fall upon you, passively, as call upon you. They assert themselves, demanding your attention, overwhelming your own sense of self, interfering with your plans and whatever sense of purpose you might have had the minute before. And nowhere, James suggested, do they do this more frequently or thickly than in Venice. They're everywhere.

So, as much as I marvel at these off-the-beaten-track water doors, I don't post them to suggest that people who've never seen them are missing something, as missing something--actually, missing a countless number of somethings--is also, inevitably, part of the Venice experience, whether on land or water, and even for the most attentive of visitors, or residents. The interesting question, in the midst of such overwhelming sensory abundance, is not of what one's missing, but of what manages to stick--and, luckily, contrary to the suggestions of guide books and tour guides, there's no predicting that for each person.

Email ThisBlogThis!Share to TwitterShare to FacebookShare to Pinterest
Labels: Living in Venice, Palazzi of Venice, Scenes of Venice 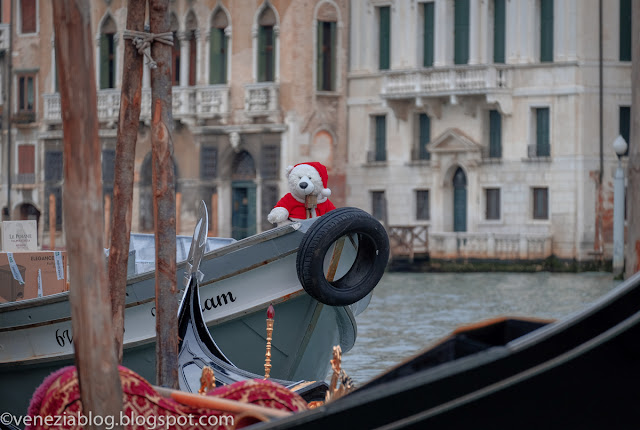 Email ThisBlogThis!Share to TwitterShare to FacebookShare to Pinterest
Labels: Christmas in Venice 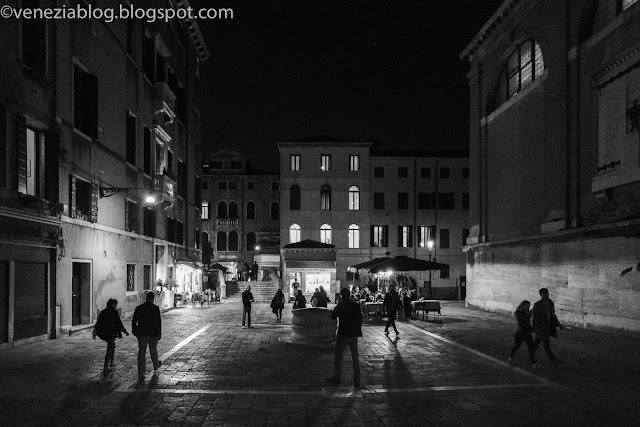 "In Venice," Gabriele D'Annunzio writes in Il fuoco, "one cannot think except through images."

With the image above I found myself thinking of a work of Alberto Giacometti's from the late 1940s entitled Piazza that you can see at the Peggy Guggenheim Museum here in Venice.

The museum's website provides Giacometti's own explanation for the work's (or series of works') inspiration:


In the street people astound and interest me more than any sculpture or painting. Every second the people stream together and go apart, then they approach each other to get closer to one another. They unceasingly form and re-form living compositions in unbelievable complexity. . . . It’s the totality of this life that I want to reproduce in everything I do. . . . 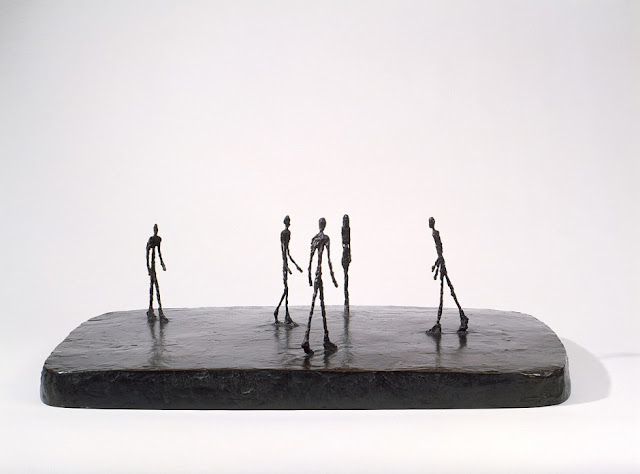 One of the things that is lost to mass tourism is the dynamism of the public space, whether piazza or campo, as described by Giacometti. Mass tour groups simply clump or trudge, volitionless; tourists, needing to be nowhere in particular, and not knowing how to get there in any case, merely drift, washing up on steps, clotting in calli, adhering to any brightly lit display window, like sea wrack.

But sometimes, and in some places, on brisk fall or winter nights (or mornings), you can still see what Giacometti had in mind. 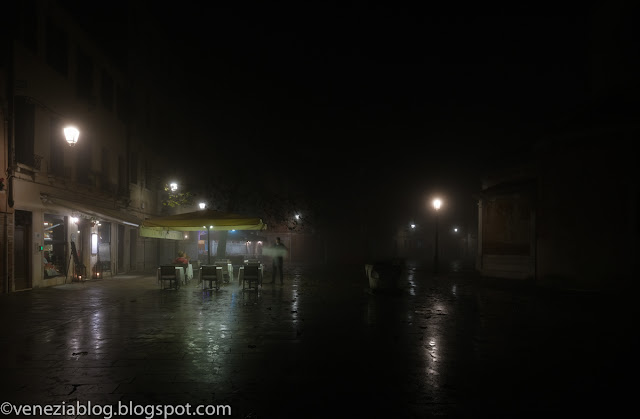 In the last hour of yesterday and the first minutes of this morning it looked like a fog was settling in for an extended stay in Venice--the city's long history turning palpable, it seemed, cold breath of the countless long-gone thickening the air, the paving stones mimicking the dark sheen of canals--while I took these shots in and around San Giacomo dell'Orio. But the fog ended up spending no more time here than the 3 or 4 hours that about 75% of mass tourists do, and today was sunny, clear, and cold. 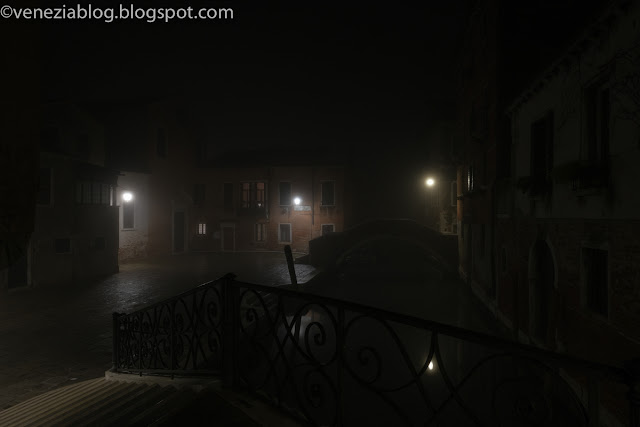 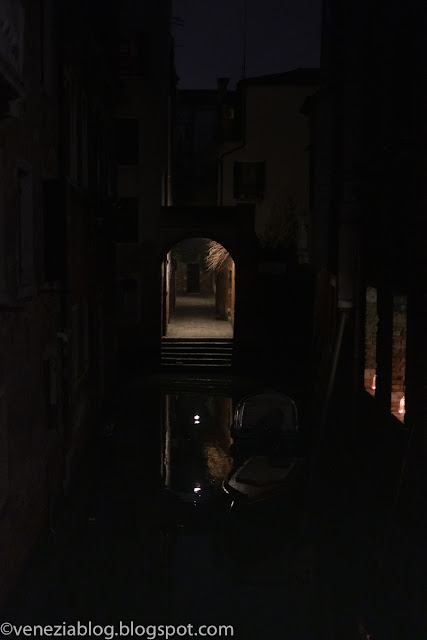 Posted by Steven Varni, aka Sig. Nonloso at 10:29 PM No comments:


...to go ice skating in Campo San Polo. At least it will be beginning tomorrow.

Lacking much chance to practice, I suspect the vast majority of Venetians are no better at ice skating than they are at driving (at which they are reputed to be very bad indeed). But the absence of expertise never shows any sign of lessening anyone's enjoyment of the latter activity--and, unlike the former, almost never poses any danger to innocent bystanders or property.

The small rink will stay up through the end of Carnevale.

Email ThisBlogThis!Share to TwitterShare to FacebookShare to Pinterest
Labels: Christmas in Venice, Living in Venice, Raising a Child in Venice, things to do in Venice with kids 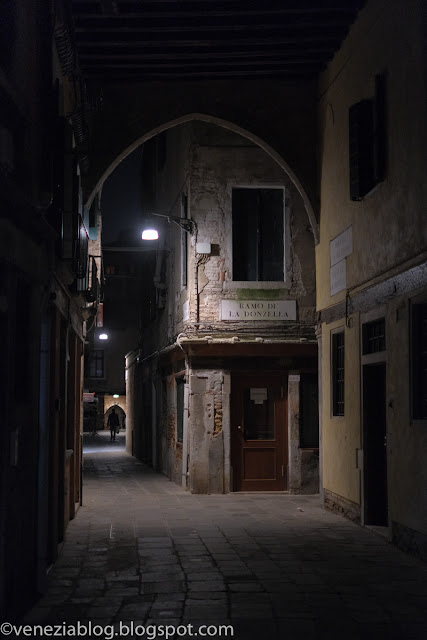 Posted by Steven Varni, aka Sig. Nonloso at 7:14 PM No comments: