Touchy Feely in a Big Way on the Grand Canal 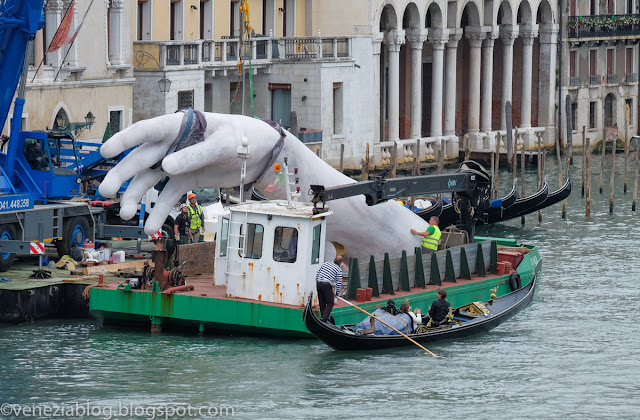 Lorenzo Quinn's piece "Support" was installed Thursday in the Grand Canal in front of the Hotel Ca' Sagredo and is sure to receive a good deal of attention for as long as it's up--not least of all because it functions well as a backdrop for selfies (perhaps the main criterion by which art is judged these days).

The giant hands of this work may remind some readers of Quinn's last work to be seen in Venice. Originally displayed during the 2011 Biennale it had an extended run among the fork lifts and trash bins and grocery pallets alongside the Canale Scomenzera, where it sat, seemingly forgotten, well through 2012 and beyond.

For more about this current work, go to the website of the artist's gallery here, where any questions you may have about its significance are answered.

If you take the above website at its word, Lorenzo Quinn has created a large sculptural emblem. Like the famous anchor and dolphin emblem used by the ground-breaking Venetian printer Aldo Manuzio, for example, or the crossed pair of hands you'll see engraved on the walls around the church of San Francesco della Vigna, these two large hands represent clearly delineated (if broad) meanings. "The hands" we are told, "symbolise tools that can both destroy the world, but also have the capacity to save it."

Moreover, we are told that "By installing Support in Venice, Quinn draws attention to the delicate existence of humans and society against the force of nature in today’s climate of change. The work generates an instinctive and immediate understanding of the environmental impact for places such as Venice. The hands symbolise the role people must play in supporting Venice’s unique world heritage – it is our duty to save the ‘witnesses of the Past’ who can only survive with our help."

This climate change angle has already been repeated by a number of media outlets, but after looking at the work itself, as I have done every day for the last 4 days since it was installed, I'm still not sure what in the work specifically suggests climate change. Given the emblematic inclination of the work, wouldn't the hands need to appear to be lifting the Ca' Sagredo Hotel above the canal water in order to suggest the "environmental impact for places such as Venice [of climate change]"?

Or perhaps the giant hands should form a barrier between the hotel and the encroaching tide....

But this might call MOSE to mind, the system of flood gates that are supposed to protect the lagoon from the highest tides rushing in from the Adriatic. Well over 6 billion euros have been spent on them (at least 20% of which has been siphoned off by corruption) and, long overdue and way over budget, their operation date has recently been pushed back yet again: this time to 2021.

And perhaps this begins to get at the kinds of things that trouble me about this work.

For as far as I can see, this large piece has nothing to contribute to either the discussion of climate change and its effects on Venice nor the type of support that Venice actually lacks.

On the contrary, as far as I can see, it mystifies both issues.

The billions of euros that Venice has received to help it combat the effects of climate change have been shamefully, criminally and incompetently used and abused.

The resident population continues its precipitous decline, while the number of hotels and other types of tourist accommodation skyrocket.

Indeed, my first sight of the giant hands on barges in the Grand Canal made me hope they might be installed in a way that would call attention to how the privatization of palazzi here, their change of use from municipal functions into hotels, had turned Venice's famous waterway into something like a giant Monopoly board.

If anything, one might argue that hotels such as the one toward which Quinn's giant hands extend themselves, have received far too much "support" from local governments, at the expense of support for residents.

Or, again, that "support" for the edifices of Venice has never been lacking, but resident life has been left to collapse.

Since Ruskin's time, then again since the great flood of 1966, there have been repeated calls of "support" for Venice. It is a cliché, and never more so than when issued in the most general terms. What Venice needs, what it hasn't had for a very long time, and what it still does not have, is sound governance.

But how to represent that crushing lack in a photogenic, selfy-worthy manner, in a way that doesn't bite the hands that feed the artist--well, that's a tough one. 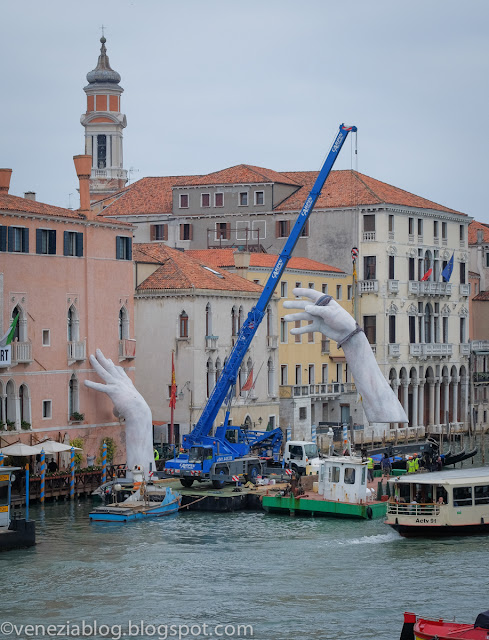 Posted by Steven Varni, aka Sig. Nonloso at 7:35 PM