On Practical Beauty in Venice and Christmas Trees 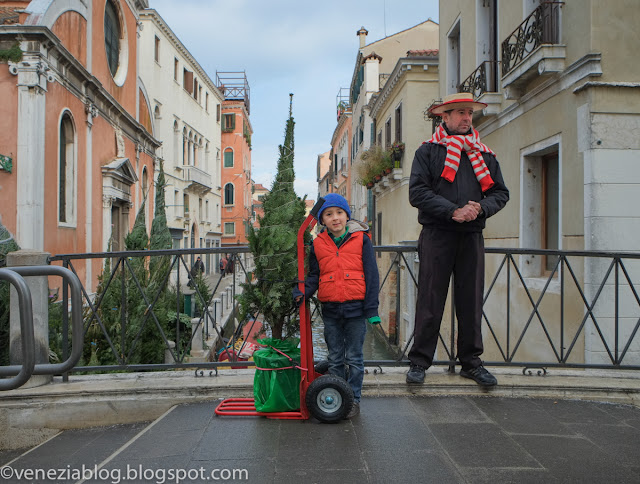 When it came time to buy our Christmas tree this past weekend we once again had to do so without the use of a boat, which Sandro, who seems to have a native Venetian's strict sense of life's essential proprieties, found to be a galling (if not downright humiliating) lack last December. You see, like many good Venetians, Sandro fervently believes that anything one needs to do should be done in one's own boat, and that for every job or errand there is an appropriate boat.

Last Christmas season he declared that nothing less than a mototopo--one of the long workboats you see transporting pallets of groceries or a mountain of hotel laundry bags or a ton of construction materials--would serve to carry home our five-foot-high tree. Of course, as we didn't (and don't) even have a small outboard motorboat, there really wasn't much chance we'd spring for a mototopo to perform this annual errand, no matter how many other tasks Sandro assured us it would be extremely useful for.

This year, however, in spite of our continuing lack of any boat at all, he didn't complain. For while we still didn't have a mototopo, we did have a brand-new bright red heavy-duty carrello, or hand truck, which is the primary accessory of every mototopo--and at least as important as a pair of shoes for anyone determined to really get things done in this car-free walkaday world of Venice.

For hardly less picturesque to most visitors than the fact that the "streets" here are canals and the "cars" and "buses" are boats, is the sight of grocery store inventory and garbage collection being delivered and picked up, respectively, with hand carts. It's something that even the hurrying hordes of day-trippers to the city can't help but notice in their few hours here, but none with the detailed observation Sandro has devoted to such human-powered trolleys for the last year. He notes (and comments on) not just general differences in size, shape and color, but variations in the circumference and number and position of wheels, between rounded tubular construction and solid steel frames, and between the different lengths and styles of nose plates and how they're mounted.

Visitors have long made pilgrimages to Venice as a realm of Art, looking to leave behind the ordinary and everyday and earth-bound, but most Venetians I've met are far more practical-minded. Sure, you can wax rhapsodic about Tintoretto or Monteverdi with them if that's what floats your own boat, but Sandro seems to have bonded far more genuinely with most Venetian men we know because of his profound interest in every single step in the process of getting real solid objects from one place to another.

I see, for example, a neighbor in the street, the grandfather of one of Sandro's closest friends and the owner of a trasporti (freight moving) company, and ask him how he's doing. "Bene," he replies, "sempre bene." I see him another time and remark upon the extreme weather of recent days. He replies simply that he takes things as they come. On yet another day I encounter him as I'm walking with Sandro and then, finally, we actually have some common interests to discuss: mototopi and carrelli and the like. Or, rather, he and Sandro do.

It's a marvelous life here for Sandro: physical and material in a way that no other city I know could, on a regular matter-of-fact un-fetishized basis, offer a child his age. At this time of year when we're supposed to reflect on our blessings, I consider this one of mine: that in this ever-more virtual and disembodied world my son has the chance to grow up in this odd car-less city, where a 5-year-old boy can make a convincing argument that a real hand-truck is exactly what he needs, not just as a toy, but as a necessity. As he did argue for the last year.

True, the helpful man at the hardware store near the basilica of Santi Giovanni e Paolo where we bought it last week suggested a slightly lighter tubular-framed one, with a load capacity still far greater than any Sandro would be able to manage for a good dozen years. But Sandro insisted on the solid steel-framed one he'd settled upon weeks before as being solely adequate to the demands--many of them make-believe--that he'd place upon it.

Of course he struggled to pull it up the steps of the large Ponte Cavallo in front of the basilica and Ospedale Civile just after we bought it, for it weighed not much less than he did. And there were some challenges getting it down the other side as well, as the weight of it threatened to get away from him and pull him flapping behind it like a flag tied to its hand grips. But once this first substantial obstacle had been bested and we paused for a rest, he leaned against his hand truck and sighed, "This is a dream come true." 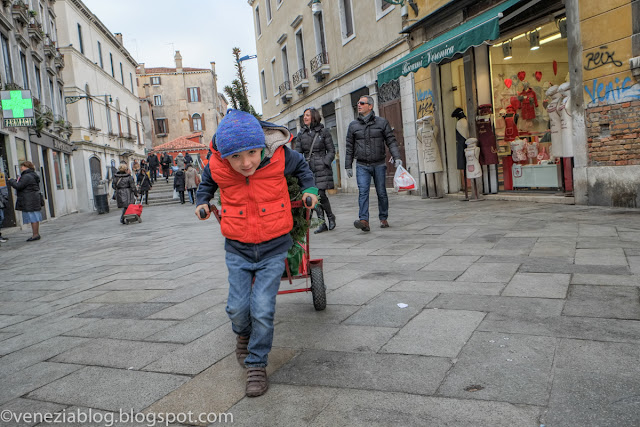 So the dreamy red heavy-duty hand truck we used to pick up our potted Christmas tree and transport it the long distance home from the seasonal tree market beside the church of San Felice in Cannaregio was the one he'd just gotten for his sixth birthday and it did, indeed, prove to be quite useful. I pulled the tree-laden hand truck up and down the bridges we crossed, but Sandro managed it the rest of the time, pulling it behind him down Strada Nova and then through Sant' Elena after we got off the vaporetto as though he were a cart horse. A very happy cart horse.

He was happy, too, to be seen laboring in this way by the guys at our neighborhood fruit and vegetable stand. Guys for whom, like him, hand trucks are a daily part of their lives. Practical hard-working Venetian guys, like him. But who, unlike him, probably don't sleep with their hand trucks standing snugly against the side of their beds. 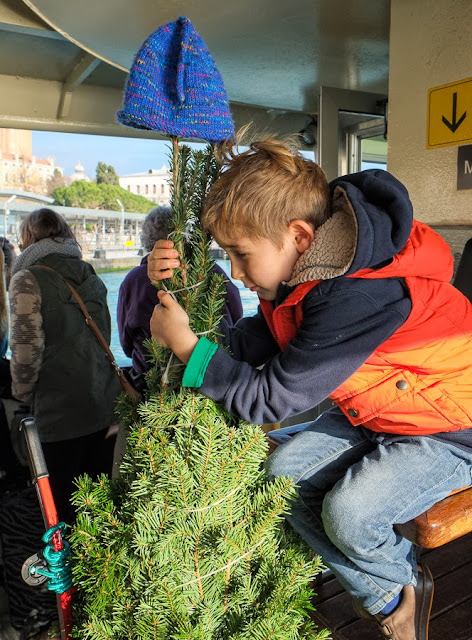 Posted by Steven Varni, aka Sig. Nonloso at 3:38 PM