Over a year ago I'd heard that there were wine-making facilities in one corner of the cemetery island of San Michele, in an old monastery there, and I'd been wanting to see them and work in them ever since. I finally got my chance last Sunday, and Jen, Sandro, one of Sandro's friends, and I set out for the island knowing only that we'd have the chance to stomp grapes. That's all we needed to know, really--it's certainly all I cared about. A friend had briefly mentioned the event to Jen, Jen had told me, and I hadn't even bothered to ask who was putting it on or who else would be there: time and place was sufficient.

Though I didn't know about such details when we arrived Sunday morning, I should probably note here in the interest of context that the small island on which we found ourselves became the site of a Camoldolese monastery in 1212. At that time, and for some 600 years after, it was a much smaller, much more isolated island than it has been since 1829, when the Austrians filled in the expanse of water that once separated it from the neighboring island of San Cristoforo to create the large cemetery island we now know. Just how much smaller and more isolated? A detail from Jacopo de' Barbari's famous map of Venice from 1500 included on page 46 of Deborah Howard's and Laura Moretti's Sound and Space in Renaissance Venice (Yale Univ Press, 2010) shows: (http://yalebooks.co.uk/pdf/9780300148749.pdf, 2nd pdf page).

In fact, the above pdf pages offer an excellent account of both monastic life on the island of San Michele and the creation and form of Codussi's beautiful and influential church. 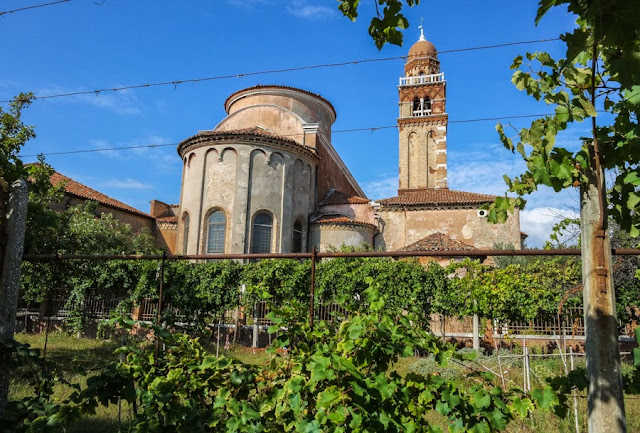 In any case, the cloisters adjoining the church of San Michele date from the 15th-century and include, I suspect, some of the rooms in which wine casks and such are stored, as well as over-sized volumes grouped very loosely by year on various bookshelves and tabletops in which are inscribed the names of the cemetery's dead. The grape arbors among which we worked were located within a cloistered garden space that, most likely, had long long functioned as such, though the vines themselves and the supports on which they grew were of no great age.

But what kind of grapes did we find ourselves picking as soon as we arrived, and what were the next steps in the wine-making process, and when would the wine be ready? It didn't occur to me to ask a single one of these questions, so happy was I to find myself working beneath grape arbors in a spectacularly dappled light which seemed somehow, and much to my surprise, to strike me as almost paradiasical. The dappled light was such that it made me careless of questions and answers, of the contemporary curse of information, accurately or erroneously or indifferently recorded and endlessly passed along, the epidemic of our age.

Which is probably a good place to stop writing for now, and leave the rest (or at least more) for the next post, and to the many photos below. 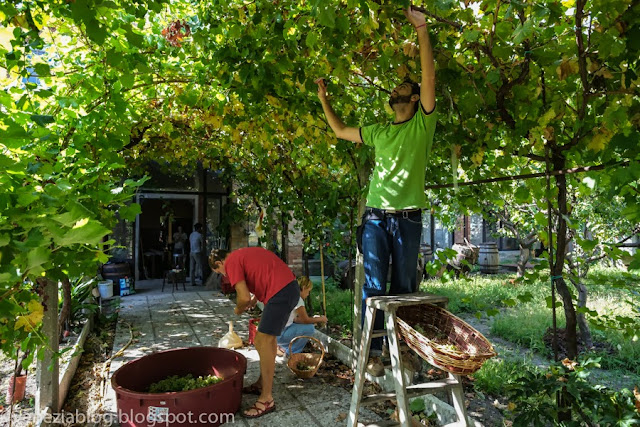 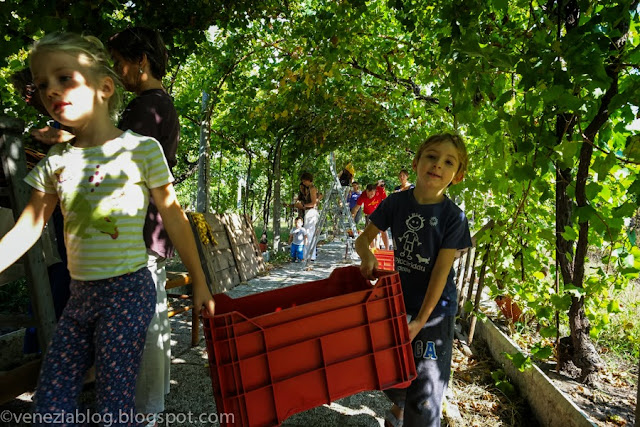 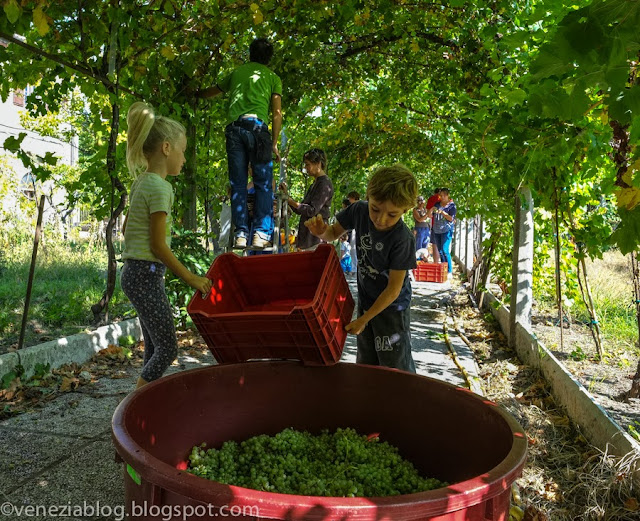 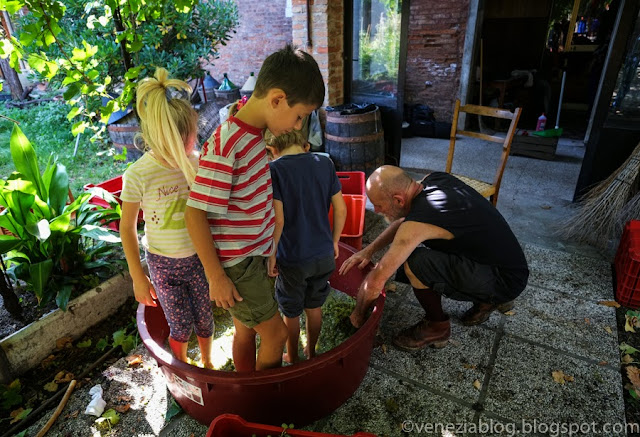 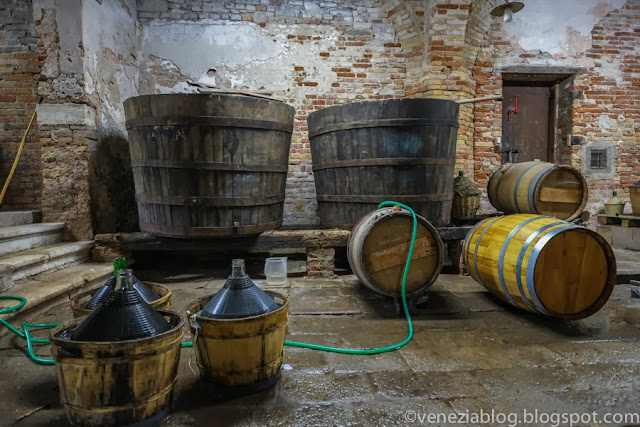 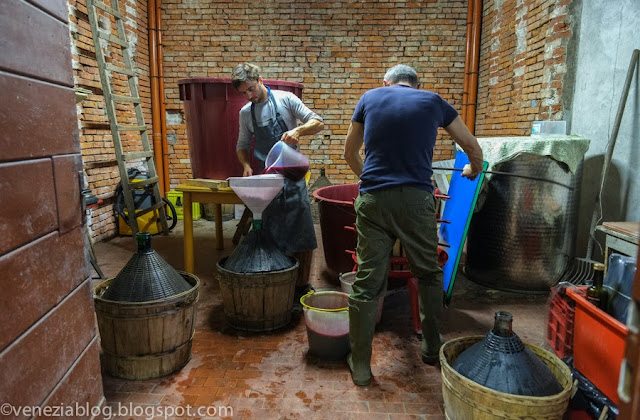 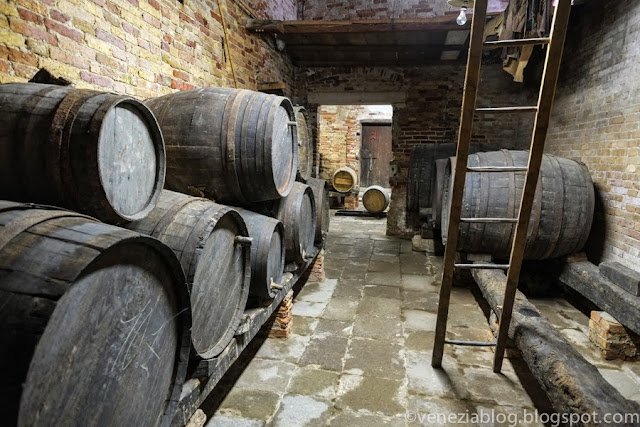 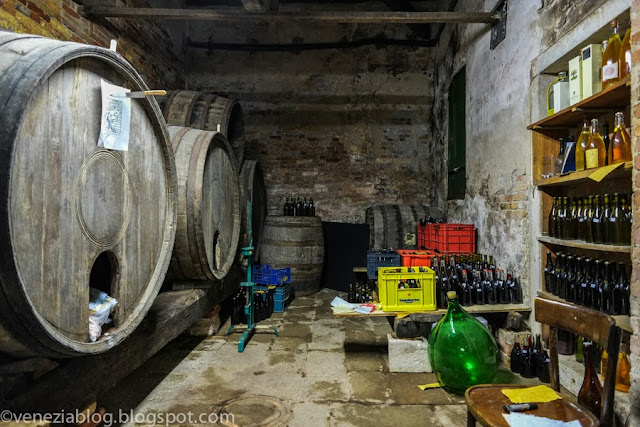 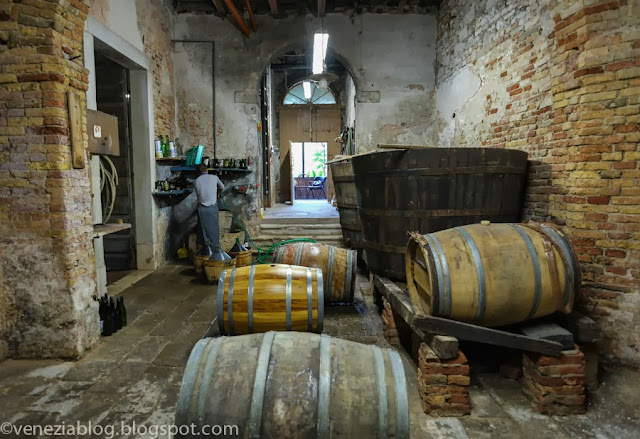 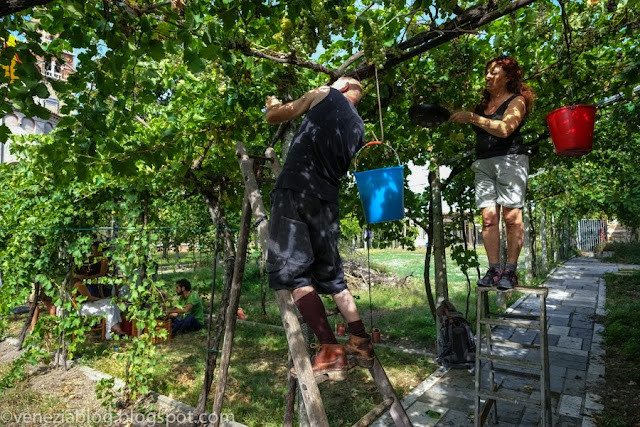 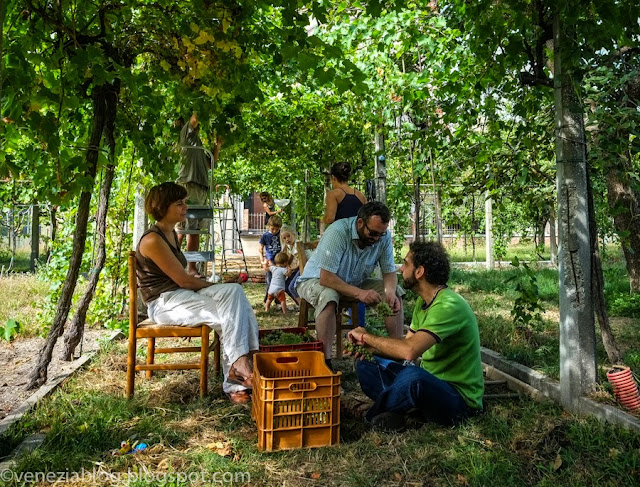 And  a short wine stomping video from this day is here: http://veneziablog.blogspot.it/2013/09/winemaking-on-isola-di-san-michele.html

Posted by Steven Varni, aka Sig. Nonloso at 7:35 AM