The Height of Conspicuous Consumption: Cipriani's Dinner in the Sky

Behold, above, the newest ride at Veniceland!

At least that's been the reaction of many Venetians to the "Dinner in the Sky" rig suspended 164 feet (50 meters) above the pool of Hotel Cipriani and promising fine dining on a rotating platform. Actually, the little promotional video on the Cipriani website promises nothing less than flight itself with the following "poetical" lines and soaring Broadway strains (in every sense of that word):

(I find myself hoping this is a bad translation of what sounded better in the original Italian, but I doubt it.)

More mundanely, it will run you 50 euro per person to have a crane--pardon the construction worker phrasing, but it's apt--haul your ass skyward, where you'll be allowed to dangle for 30 minutes enjoying "apertifs and finger food." Which I suppose is much better than bird feed, but that "finger food" is a bit of a let-down after the celestial overtures of the promo.

Or for 250 euro per person you'll be treated to a three-course dinner, with wines, while you gaze down on the amusement park Magic Kingdom state fair legendary city below. You'll have one hour up there among the stars, beside the industrial crane, and you'll be seat-belted into your seat. You can forget about slipping away to the restroom to powder your nose or attend to any other needs. 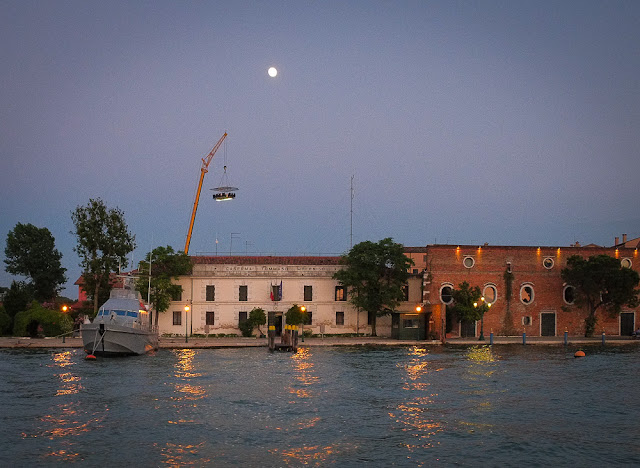 Like others "attractions" of this sort, Dinner in the Sky is only here temporarily (from 19-23 June) and, like any other carnival ride, has traveled widely. It's done previous stints in Paris, London, Dubai, Las Vegas, Sydney, Monaco and Brussels. None of which stops (not even London or Paris) will in any way soothe the injured pride of a Venetian worried that his city has basically been turned into Atlantic City, as a true Venetian (even 200 years after the collapse of its toothless Republic) will readily admit that he or she considers every non-Venetian un campagnolo (a peasant, rube, or hick)--including Parisians and Londoners. 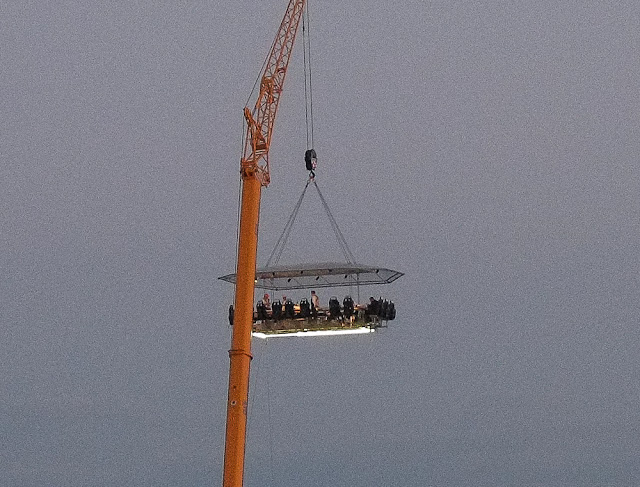 What surprised me last night, when I took these photos during the 8 pm feeding (there's a second one at 9:30), was how very few people looked to be seated around the table. I don't have a zoom lens, but based upon the cropped photo above (taken from the #2 vaporetto), and the cropped photo at bottom (taken on foot some distance behind the church of Zitelle), the chef and two waiters equal or nearly equal the number of diners.

Suetonius, in his biographies of the Caesars, describes how Roman emperors loved to be entertained as they ate, and as the empire became increasingly more unsustainable and the emperors more and more erratic, these entertainments became more extreme, involving live sex acts, torture, and murder. I suspect that in the infamously-decadent Venice of the 18th-century it might not have been too difficult to arrange for people to, ahem, perform while one ate. Venice these days is no longer the erotic inferno it once was: more Coney Island than Caligula. But there's little comfort in that. What many Venetians fear is that what the diners suspended above Hotel Cipriani are paying to observe while they eat is the sight of a once-great city in its death throes--the silly rotating rig they're strapped into just another of the fatal symptoms.

Posted by Steven Varni, aka Sig. Nonloso at 2:53 PM