The Most Beautiful Painting In Venice 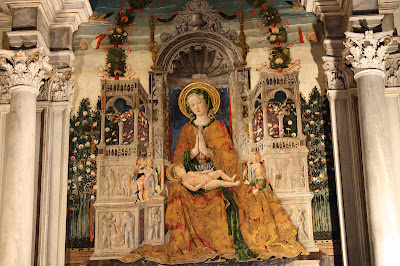 Okay, I know I'm pushing it in the title of this post, but what if I said the complete title is "The Most Beautiful Painting in Venice that Relatively Few Visitors Ever See?"

Or "The Most Beautiful Painting in Venice Painted by Someone No One Has Ever Heard Of?"

The artist in question is one Antonio da Negroponte, about whom very little is known, and the painting in question seems to be his only surviving work. The Save Venice Foundation, which restored the painting in 1976 and again in 2008, refers to the painter as Antonio Falier da Negroponte, and a very short piece in the Oxford Grove Art online encyclopedia describes him as "a painter of Greek origin, active in Italy" against whom another great Venetian painter, Jacopo Bellini, threatened legal proceedings in an effort to recoup money owed him. 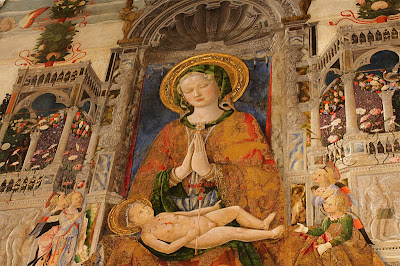 The discussion of the painting and its restoration on the Save Venice website--which I just discovered today--notes that the painting originally may have been the central panel of a triptych, and was "enlarged and partially repainted" to fit into its present frame in the 16th century. Certainly, the uppermost half-circular panel depicting God the Father and the Holy Ghost bears little resemblance to what is painted below, but any other additions to the original narrower painting are not so easy to see. The complete account of the restoration, along with some interesting photos, may be found here:

The painting itself may be found in the church of San Francesco della Vigna--which is of course a favorite destination of the more loyal (or hopelessly enthralled) of Venice's many lovers, but rather rarely visited by many others who come to town. Indeed, it's not even mentioned by Rick Steves in his popular guidebook. But, then, he also neglects to mention SS Giovanni e Paolo--and these are oversights for which I'm grateful, not critical. It's hard to hide a church as large as Giovanni and Paolo, but anything that might lessen the swarms of tourists to certain lovely places is alright by me. 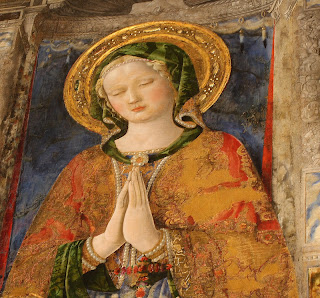 As it is, those casual visitors who do venture all the way to San Francesco della Vigna often seem to walk right past the altarpiece without a second glance. If you've come looking for the works by Veronese or Bellini or Tiepolo here, this static gothic-looking thing hidden in the shadows beside a side door probably won't arrest your gaze--though it's the painting's almost Byzantine-like hieratic quality combined with its great fecundity of detail which makes it so extraordinary. A combination, in fact, that oddly enough makes me think of certain Hindu art. It's a work that repays all of the quiet attention one can give it.

And, in truth, there are long minutes when I stand before it and have no doubt that it's the most beautiful painting in Venice--without qualifications of any sort. 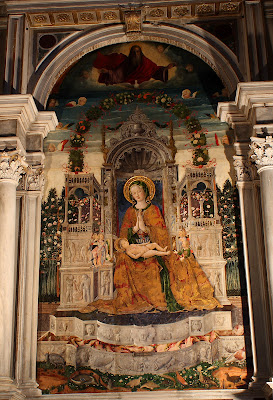 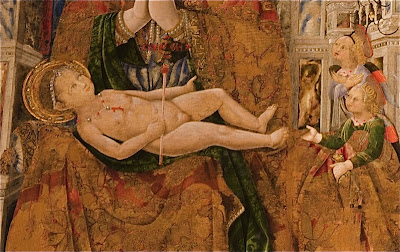 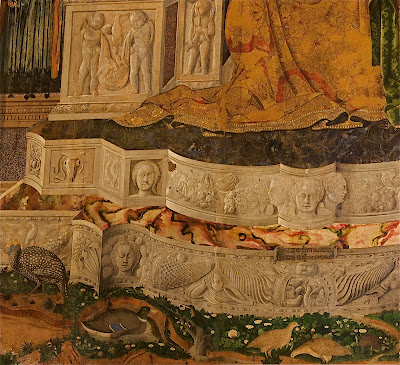 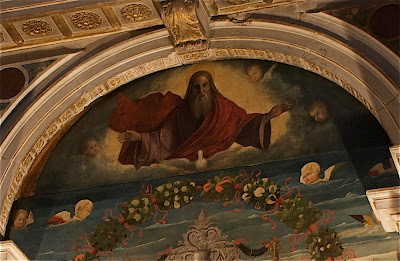 Posted by Steven Varni, aka Sig. Nonloso at 5:15 PM